Faded paint can be a badge worn proudly.

In the past I’ve mused obliquely about how signage can influence the overall character of a retail district. Lo and behold, the character of a retail district can, in turn, influence the type of signage as well. And what better place to demonstrate this than in some of the most heavily trafficked retail locations in the country, where demand for limited space is so high that the competition becomes cutthroat and leases are outrageous? Places like Chicago’s Michigan Avenue/Magnificent Mile, Rodeo Drive in Los Angeles (Beverly Hills to be exact), Walnut Street in Philadelphia, Newbury Street in Boston come to mind. Or, just a few miles away from that last corridor in the series, Harvard Square in Cambridge, Massachusetts. 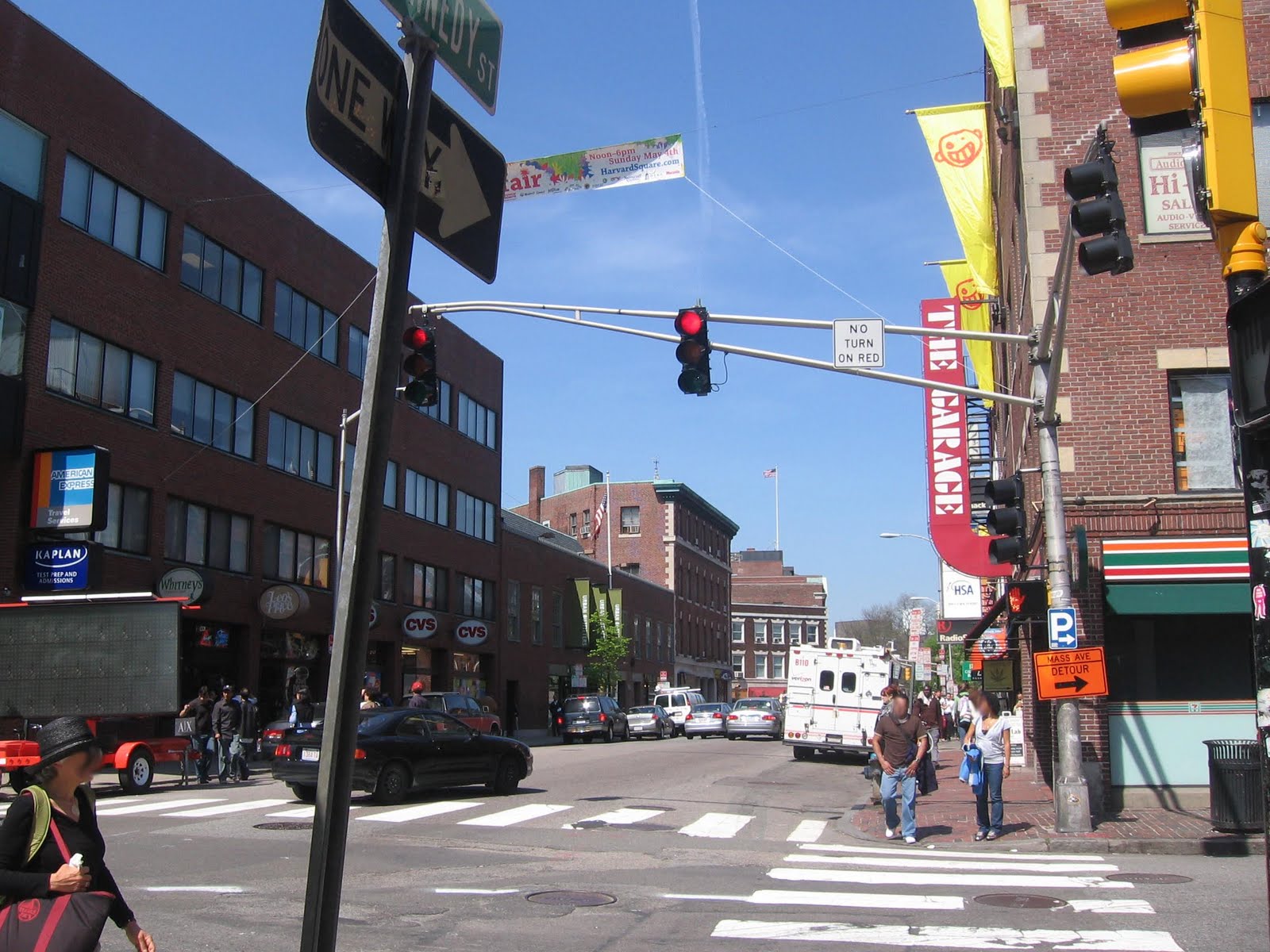 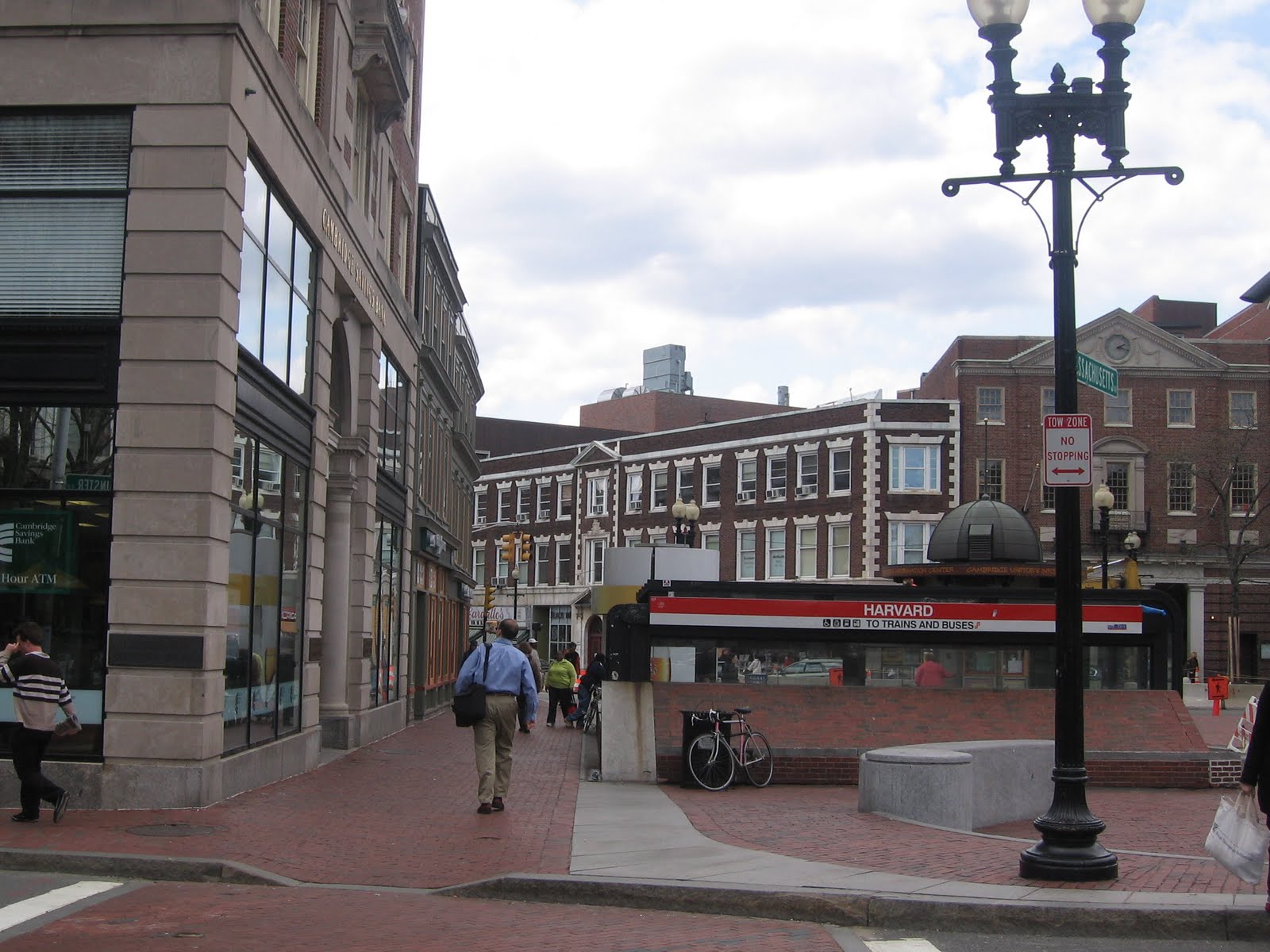 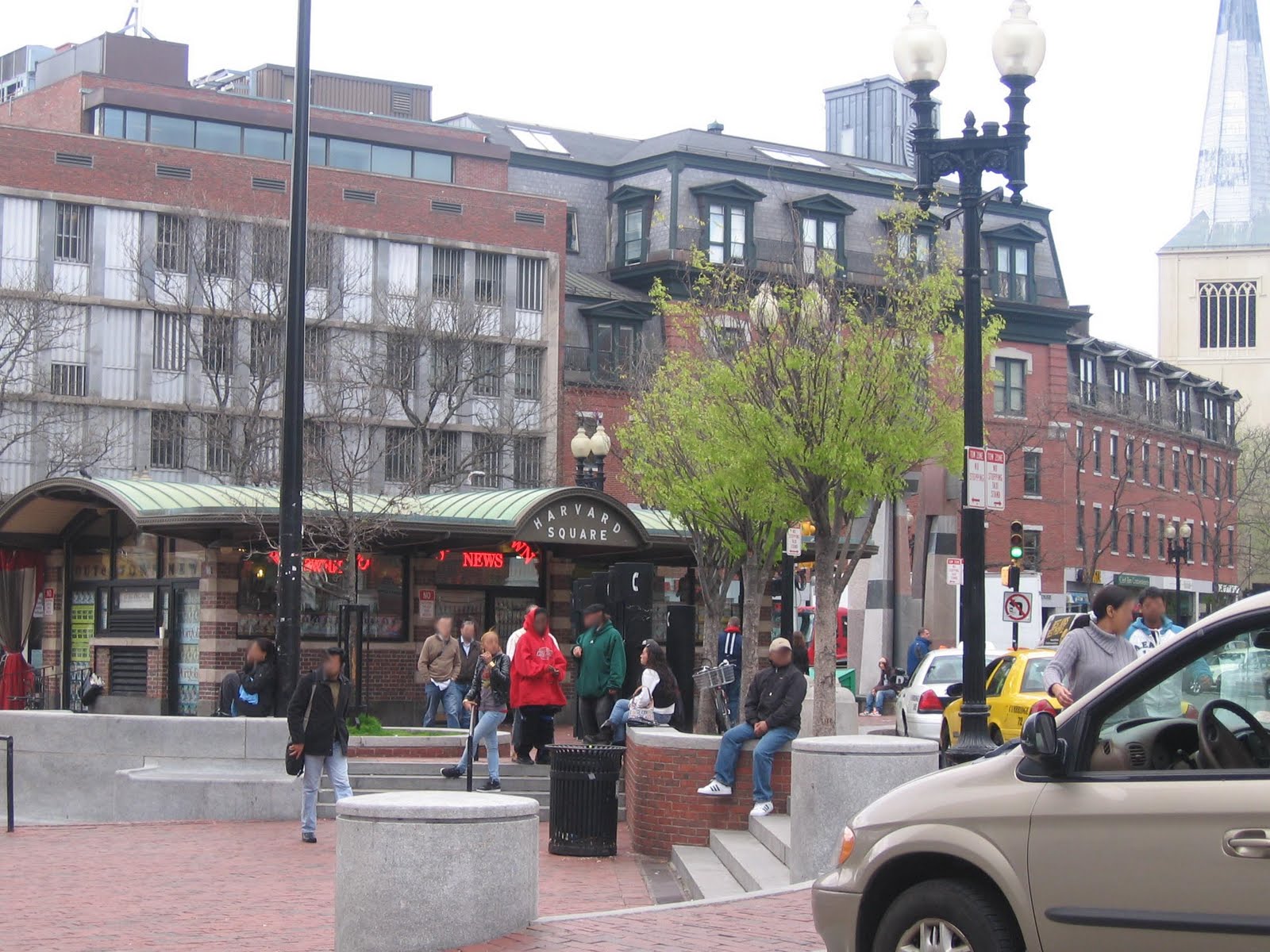 This square coincides with a major stop on the Boston’s subway system, the Massachusetts Bay Transit Authority (best known as the “T”) and the edge of Harvard University. It also serves as the densest concentration of retail and commerce and some multi-family residential in Cambridge, thus serving as the de facto central business district of the city. Aside from the huge concentration of students and shoppers, it attracts a considerable number of tourists, no doubt enticed to visit one of the most famous higher learning institutions in the world. Immediately upon exiting the Harvard T stop, one encounters this kiosk. (Can you spot the grammatical/mechanics error?) 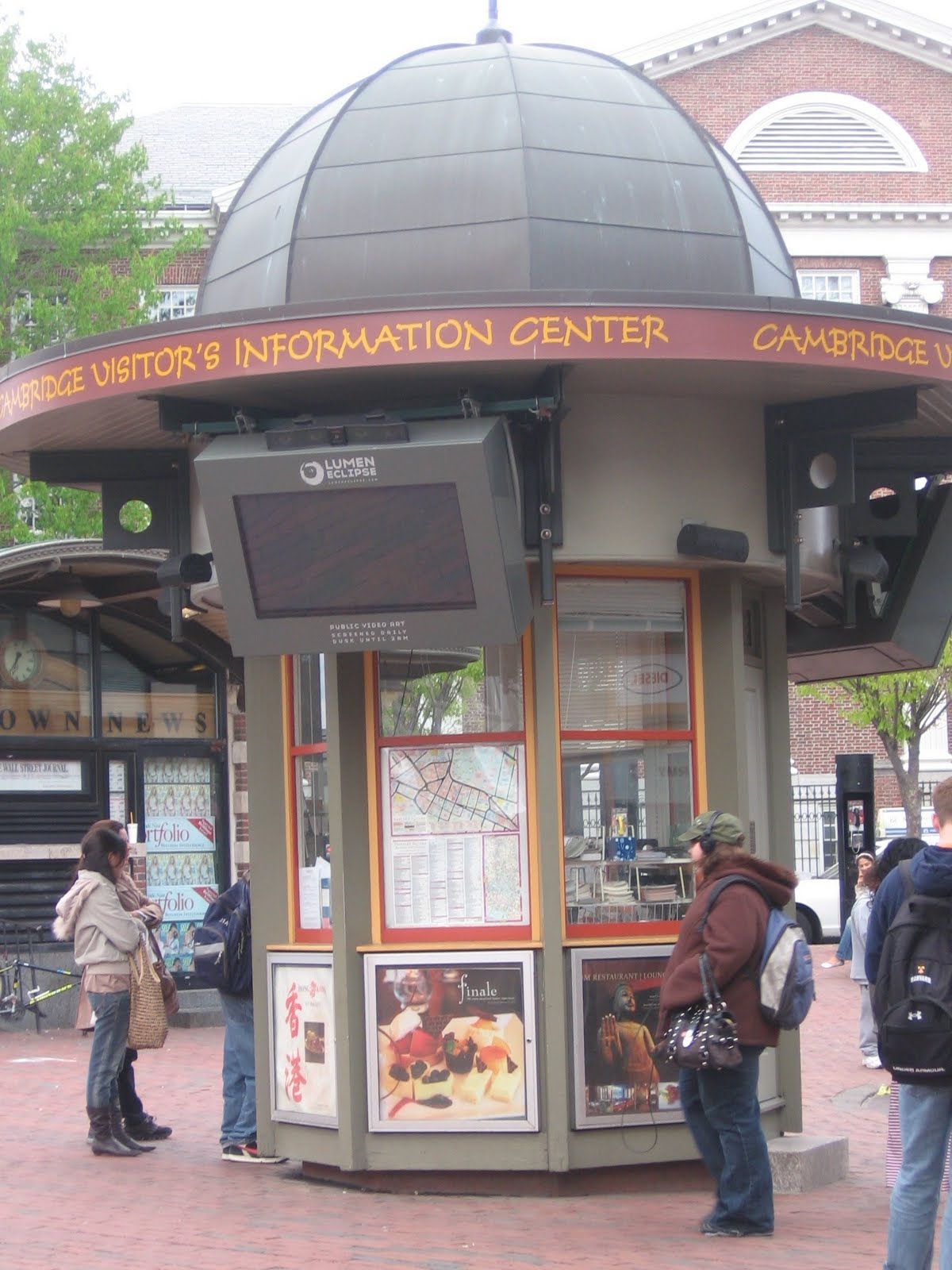 Cambridge, by American standards, is a very densely populated city: 2007 Census estimates put it at over 15,000 persons per square mile. It is also in close proximity to some of the wealthiest areas in metro Boston. Though Cambridge itself only shows average reporting for median household income, the figure of approximately $50,000 (depending on Census year taken from between 2000 readings and 2008 estimates) is skewed downward by the huge student presence, as well as the city’s commitment to income diversification through affordable housing for the working class. Nevertheless, portions of west Cambridge are quite affluent, the abutting suburbs are considerably wealthy, and directly to the east are some of Boston’s premier neighborhoods such as the Back Bay and Beacon Hill. So it is not surprising that Harvard Square/downtown Cambridge should be the epicenter of some expensive retail.

What’s surprising when one walks the streets of Harvard Square is how exclusive it is. I could also apply the word “eclectic”, but it seems like an overtly subjective—not to mention highly clichéd—judgment call. “Exclusive” seems a bit more balanced in this context because very little of the mundane survives: hardware stores, dry cleaning, barber shops, delicatessens, a local watering hole, and many of the other conventional tenants that occupied Main Streets of the past (as well as other Main Streets in metro Boston in the present) are hard, if not impossible, to find here. Instead, one sees a plethora of restaurants (both high-end and fast food), boutiques, spas, travel agencies, and upmarket national chains, as evidenced below: 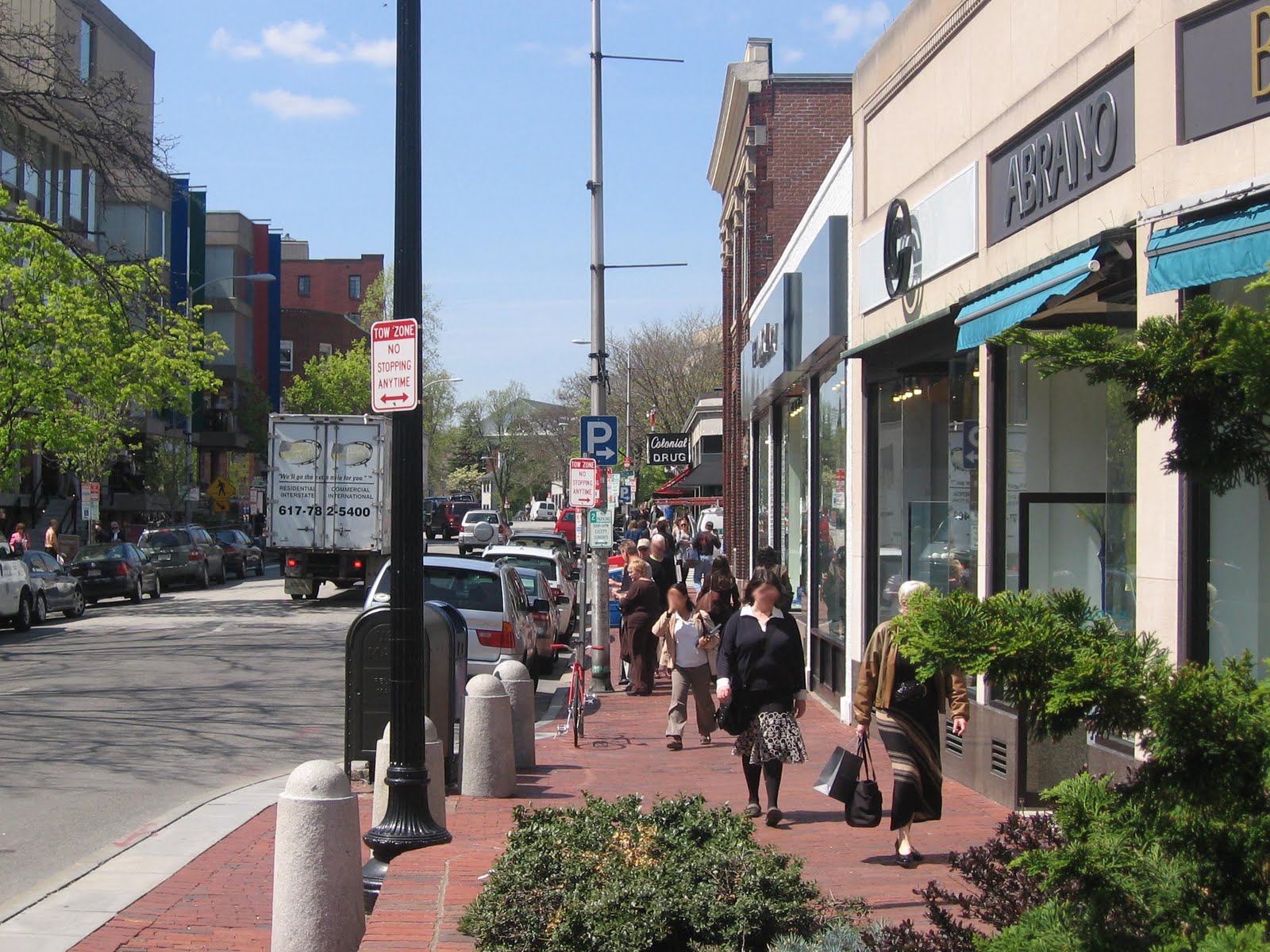 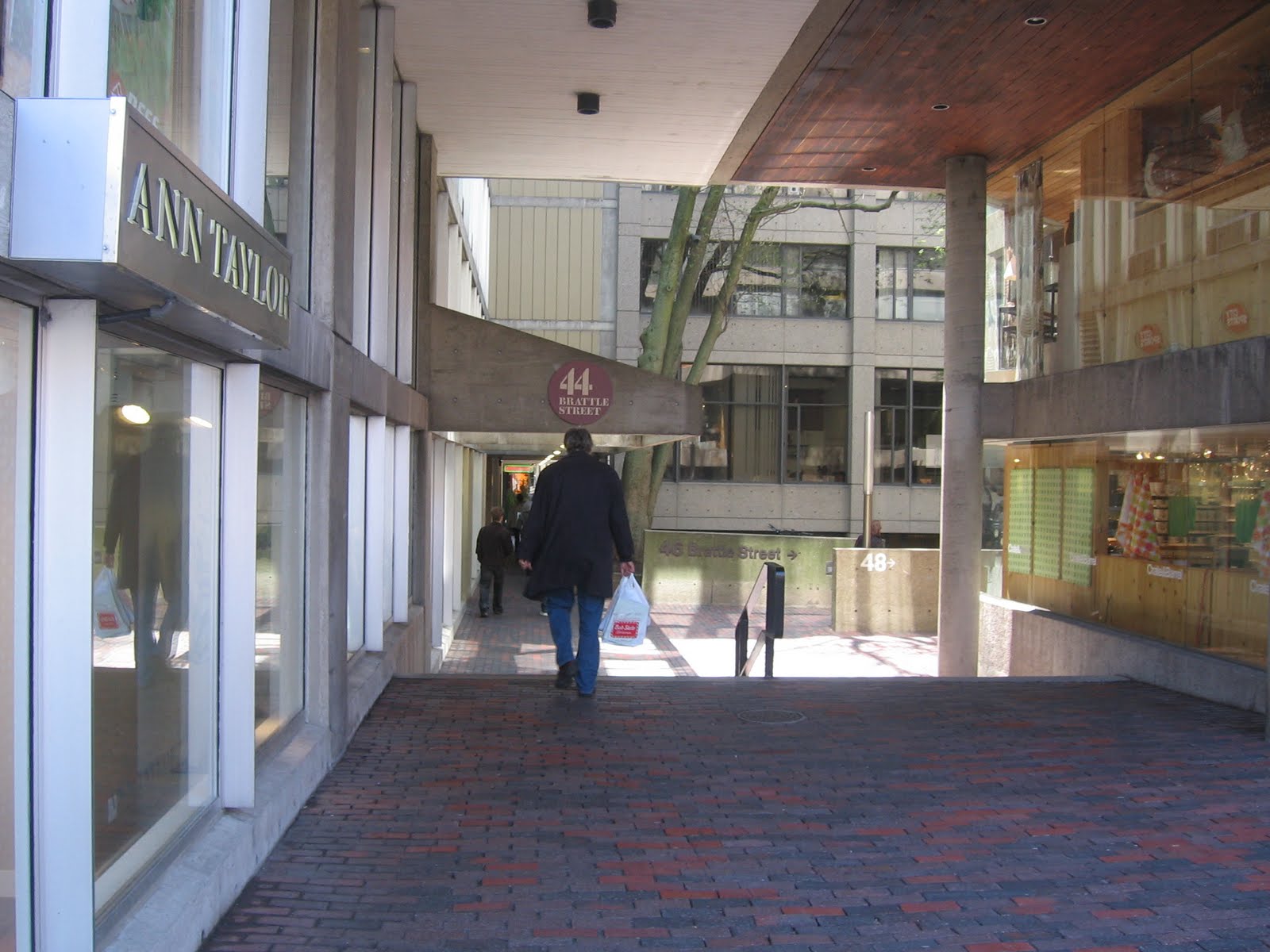 Ann Taylor on the left, Crate and Barrel on the right. 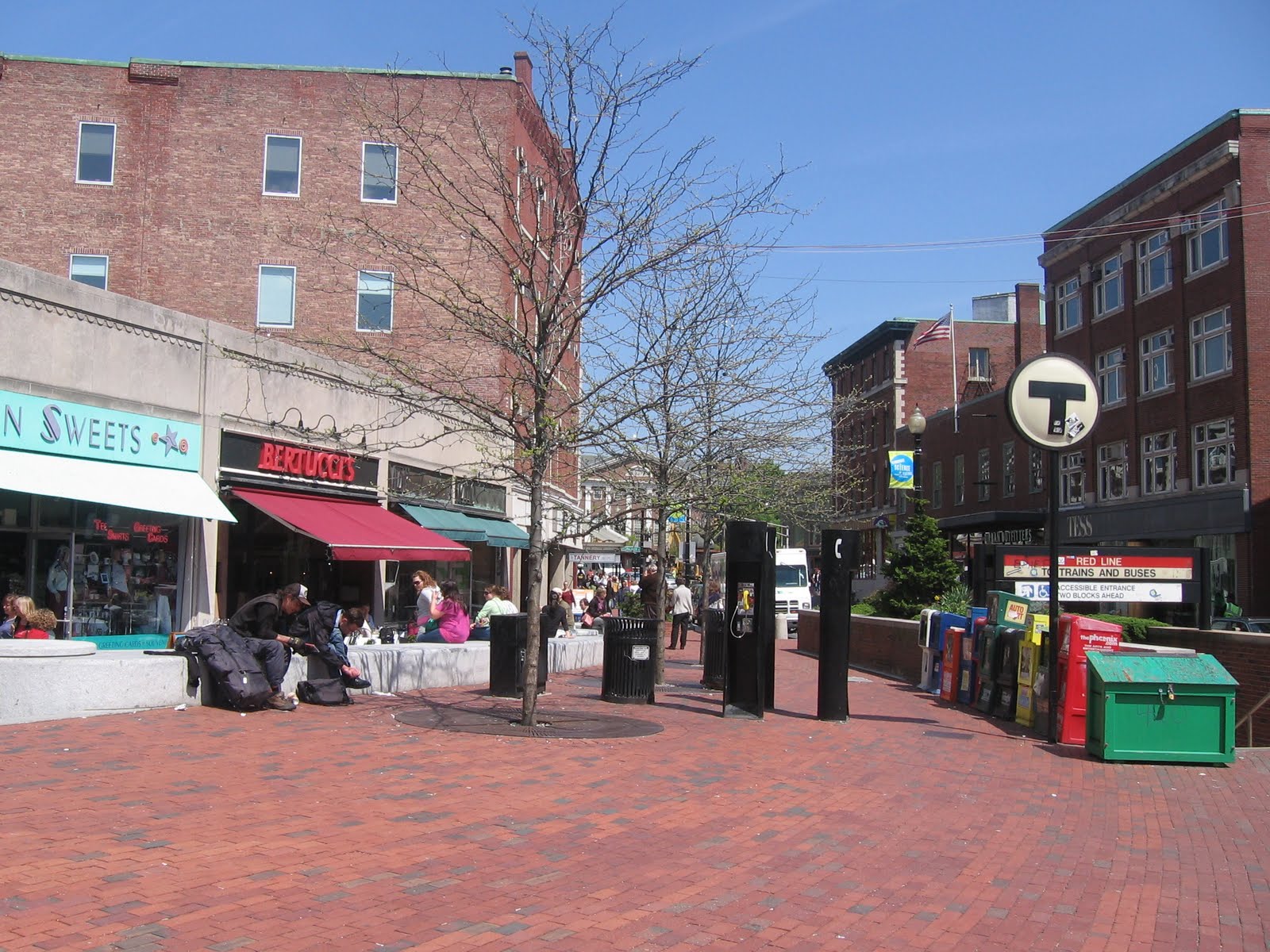 This observation is not intended as a criticism of Cambridge’s downtown: by the metrics of pedestrian counts and per-square-foot leasing prices, Harvard Square is performing better than most central business districts in the country, and might rank among the more prestigious commercial centers in the world. Yet I have heard locals gripe about how Harvard Square is nowhere near is great as it used to be: it’s a whitewashed version of its grittier, humbler, more bohemian past. It’s obvious that it draws upmarket tenants; less conspicuous to the mere visitor is how quickly most of these tenants come and go. With such high lease rates, retailers need a high sales volume to stay profitable, and this can become onerous to local entrepreneurs who don’t have the working capital to guarantee survival during the life of a lease, which can last up to five years. Thus, with each passing year, Harvard Square’s local flavor succumbs to more reliable tenants: banks and major chains.

The best evidence of this? The signage, of course. The few older establishments stick out like a Chevy Malibu parked on a Cambridge street among all the Volvos and Audis. 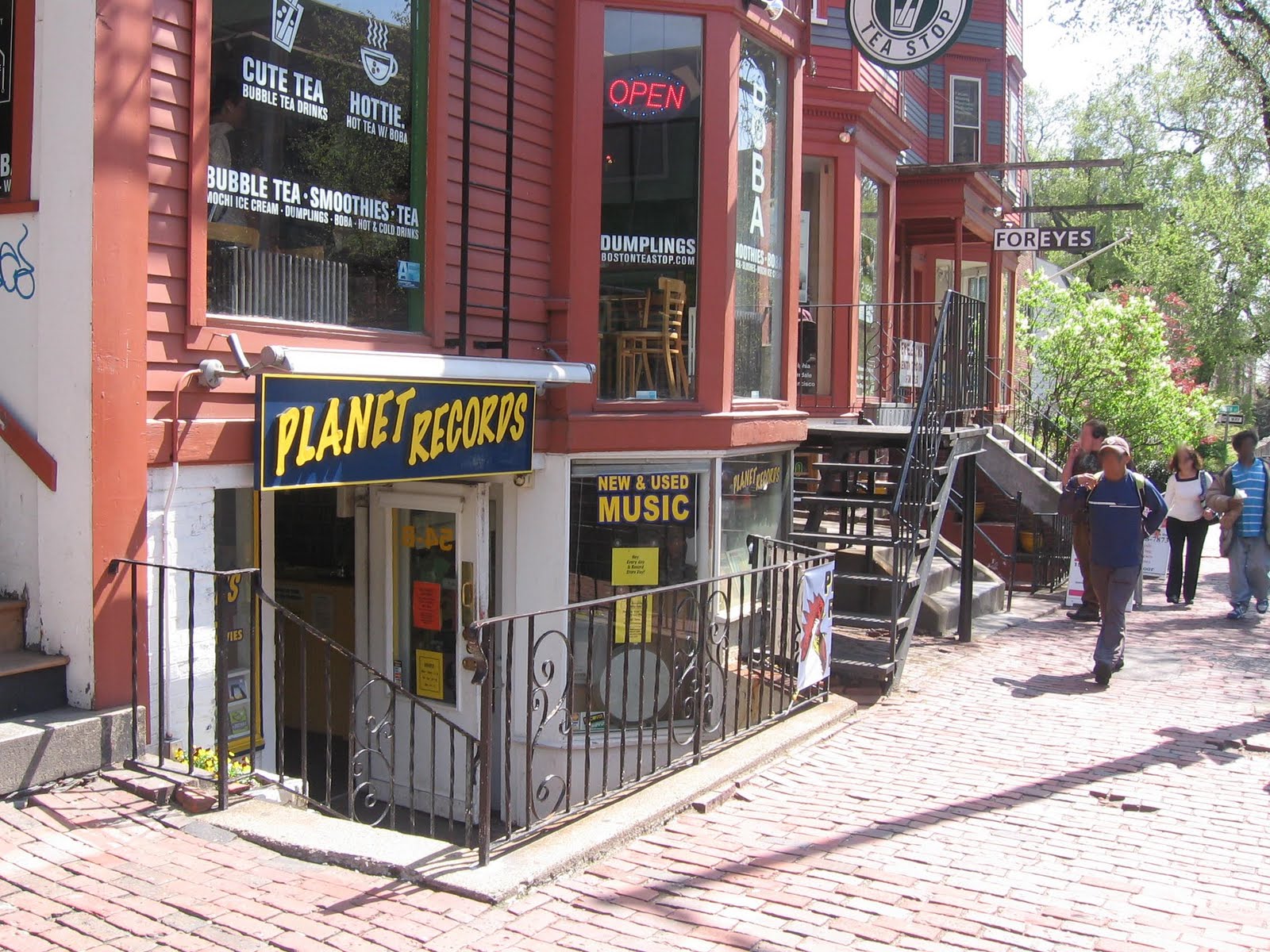 Planet Records claims to date from 1983, making it among the older local vendors in Harvard Square, though the signage of these other two establishments would suggest that they’re considerably older: 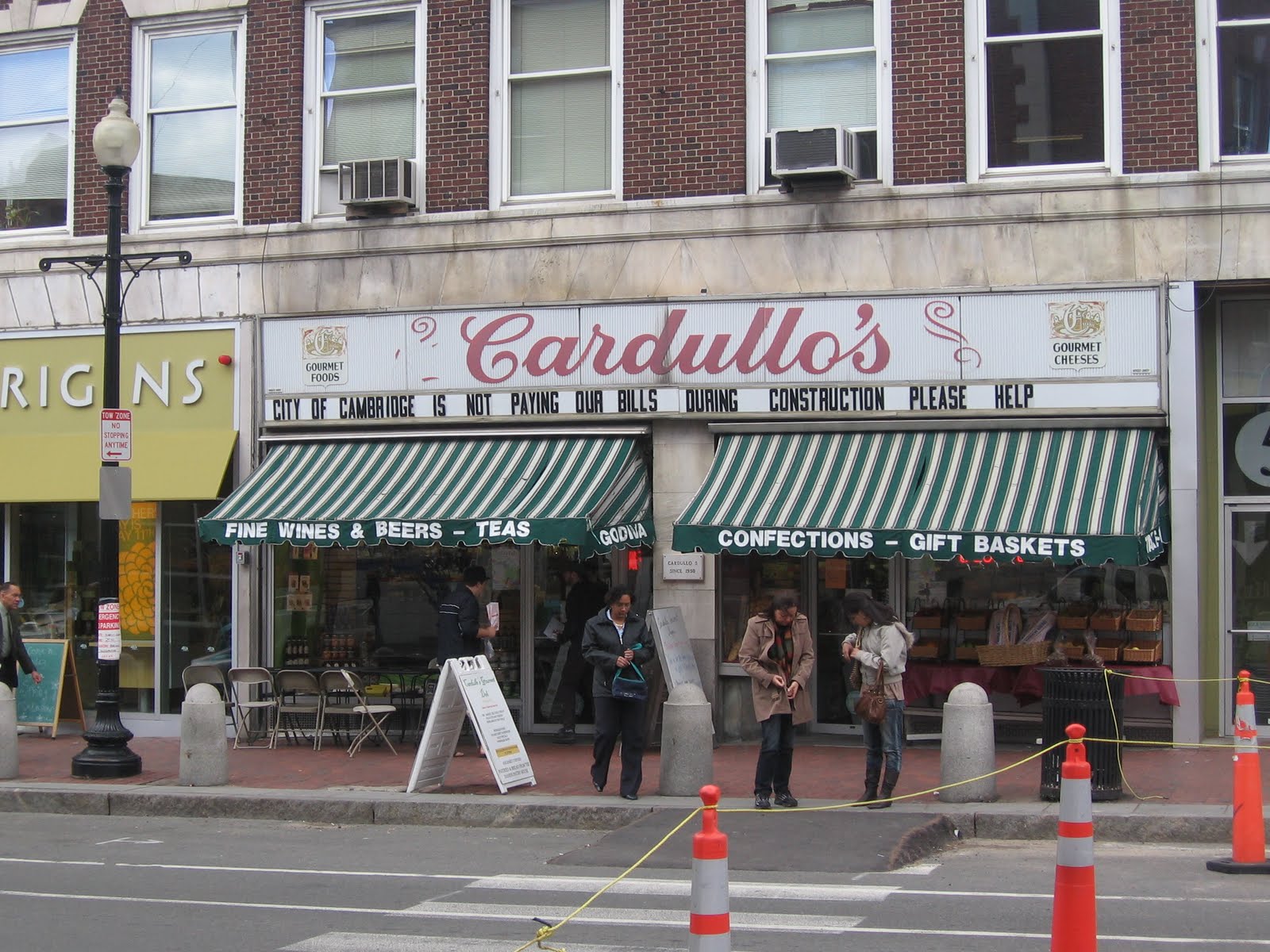 Cardullo’s (since 1950) is a specialty grocer, featuring a significant variety of imports. 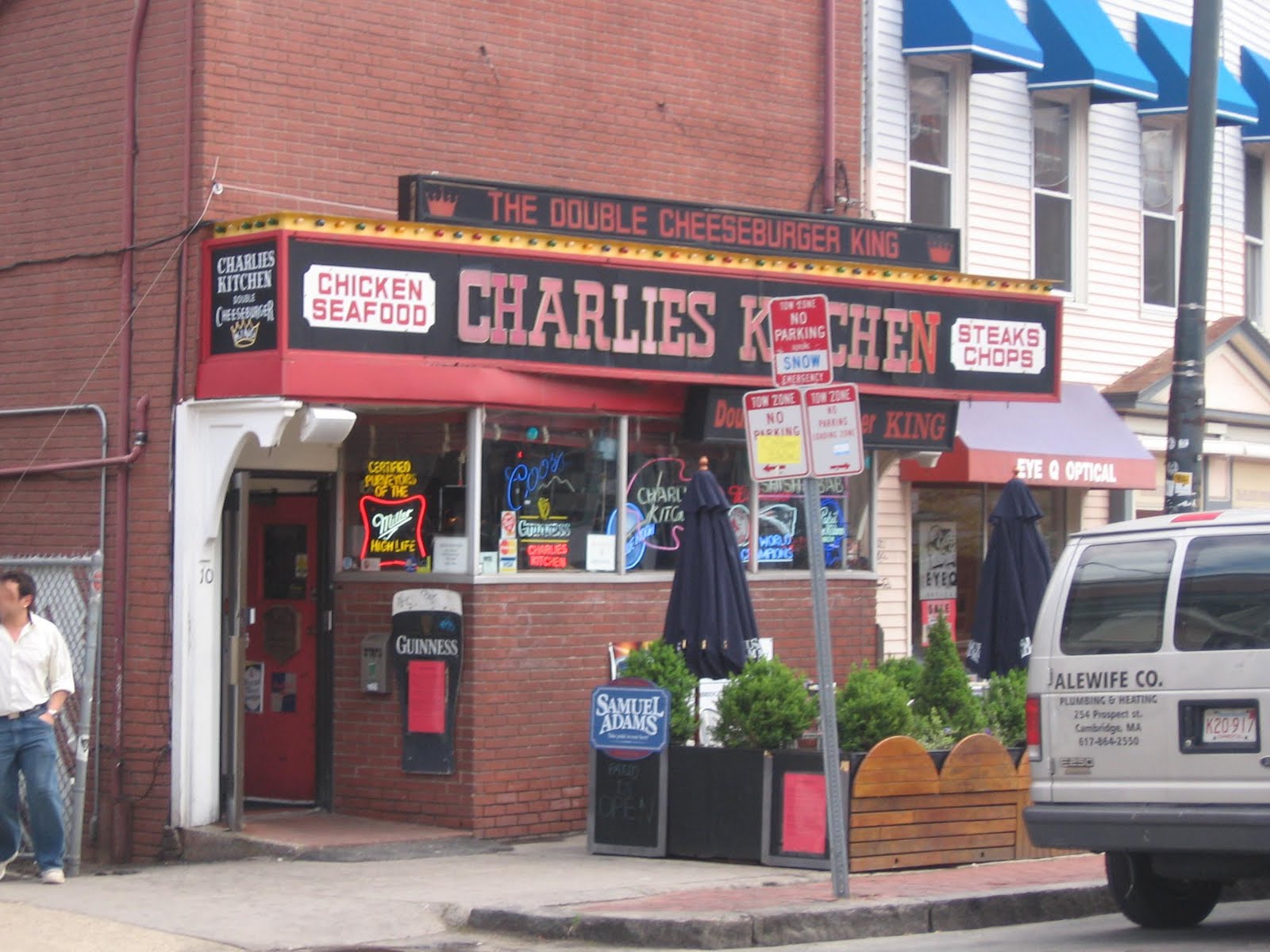 Charlie’s Kitchen, a greasy-spoon diner with a full bar, dates from about the same time as Cardullo’s; among its competitors (at least for food) is Mr. Bartley’s Burger Cottage, also preparing for its 50th birthday.

In a retail environment where the long-term survival rate is low, it behooves these proprietors not to update or improve their signage because they provide such a sharp visual contrast to the ephemera around them. The continued intrusion of national chains only intensifies the contrast, since it has become standard corporate procedure to “freshen up” the logo after a decade or two; witness the recent transformation of Walmart. Thus, Cardullo’s and Charlie’s Kitchen proudly proclaim their local, non-corporate status through unchanged logo design—whether it is stale and tired or hip and retro depends on individual tastes.

Perhaps I can save a later post for the financing of signage; all I will say here is that the ever-reliable wisdom gleaned from hearsay is that customized storefront signs are expensive. Wooden signs, currently the implicit signal for local chic, are particularly onerous to small business owners, while neon or backlit plastic sheathes are much cheaper. Harvard Square is rife with wooden signs, reinforcing the exclusivity of the shopping here—very little meshes with workaday, routine needs. Contrast that with some of the other commercial nodes in the area, such as Union Square in neighboring Somerville, which still predominantly consists of mom-and-pop eateries (many lower market ethnic), dry cleaning, nail salons, et cetera. Even Central Square in Cambridge, just a mile away from Harvard Square, has enough perceived grit to attract a completely different cadre of retailers. And the signage at Central and Union Square reflects these two nodes’ humbler aspirations.

My suspicion—reinforced from conversation by people who have lived in the area an know if far better than I do—is that Harvard Square’s retail didn’t enjoy this cachet thirty or even just twenty years ago. It had a functional purpose beyond leisure consumption, meeting mundane shopping needs just as much as Union Square and Central Square did (and by and large continue to do). Much of the transformation comes with the emergence of college campuses as tourist attractions in and of themselves, partly induced by the following phenomena:

These highly generalizable stabs only skim the surface of what has transpired at Harvard Square over the years. But many of the same patterns are visible along M Street in WashingtonDC’s Georgetown (feeding into Georgetown University) or in downtown Evanston, Illinois (feeding into Northwestern University). And these are just two other retail nodes with which I’m highly familiar; many others exist across the country, and it comes as no surprise that many of the exact same upscale national chains are squeezing out the local entrepreneurs.

What does the future hold for Harvard Square? Unless Harvard University engages in the unconscionable act of relocation, I see only a further intensification of the exclusivity of the retail here: it fits with the character of an elite school in a densely populated neighborhood that comprises a sizable component of the Boston tourist experience. The few successful locally run boutiques that manage to survive would be prudent not to update their signs, for anything over twenty years of age becomes an institution by default. And as for the locals? Without seeming too cavalier, what does it mean to be a local in a city where over one quarter of the population is foreign-born and many others are simply investing in an expensive education? It is as much a part of the character of Harvard Square’s retail to be upmarket and elite as it is for the local population (at least that segment that is in any way affiliated with Harvard or its equally prestigious neighbor, Massachusetts Institute of Technology) to complain about how Harvard’s Square has gone downhill since it’s gotten so fancy and “corporate”. No doubt part of the frustration toward the homogenized affluence of Harvard Square is attributable to the tourist presence, but for the locals who vent their spleen at these out-of-towners, all they need is a closer examination of their backgrounds, aspirations, education levels, and spending habits to see that it is much the same as holding up a mirror.

PrevThe Berlin Wall of housing tenure.
Pounding what little there is of the pavement.Next

2 thoughts on “Faded paint can be a badge worn proudly.”