Can a street name influence the local economy?

Recently as I stumbled across some largely unexplored corners around downtown Indianapolis, I noticed a handful of new townhome condominiums had recently been completed in an unlikely area. They comprise what is probably the first new construction in that city block in decades. 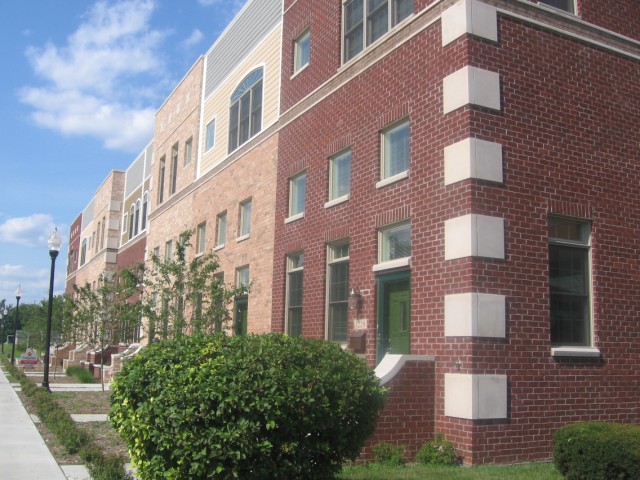 My suspicion is this development will have several formidable challenges to overcome. First, it markets itself as Canal Gardens, even though the Central Canal mentioned at length in an earlier blog post is completely cut off from this development by a series of interstate exit ramps. What remains of the canal in this part of town is little more than a grassy swale. 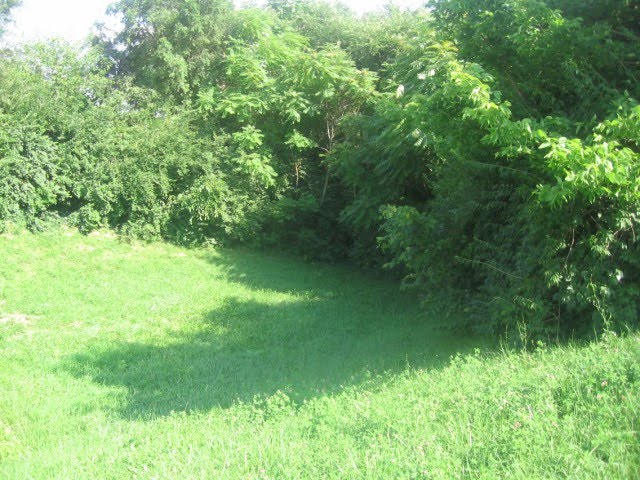 The aforementioned interstate exit ramp forms the back yard for these homes. Although the city skyline might poke out over it, providing a respectable view from the upper floors, residents in these condos will have a hard time opening the windows back there without being assaulted by the noise of cars rushing by. 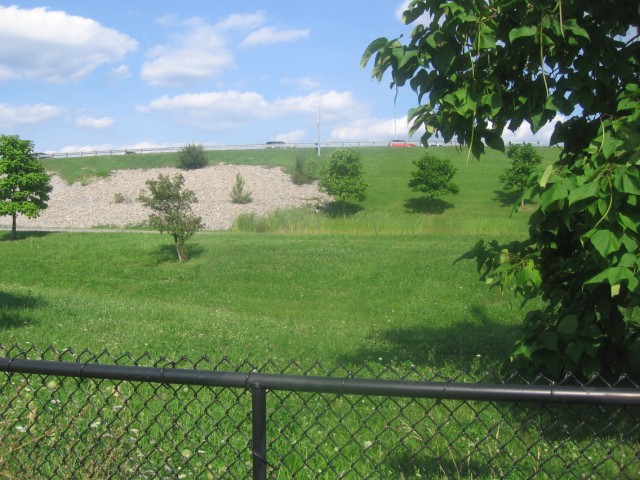 Reasonably good sidewalks and crosswalks help mitigate the barrier this spaghetti junction might pose, but it still feels somewhat cut off from a downtown only a mile and a half away. However, the biggest problem penetrates into a deeper, tangled web of sociocultural and racial tensions: 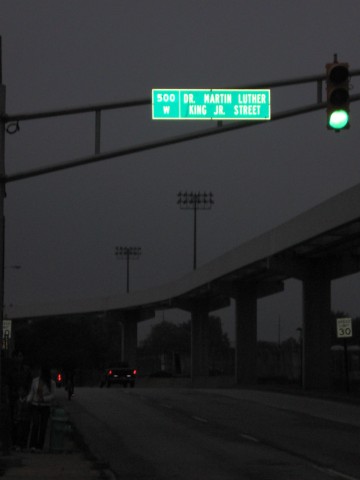 Yes, these condos claim Dr. Martin Luther King Jr. Street as their address. Why does living on a street named after one of the most famous civil rights leaders and prominent national figures pose such a problem? Perhaps it shouldn’t, but a January 2008 article in Planning magazine titled “A Bumpy Road” acknowledged that, despite the fact that over 700 streets across have been named after Dr. King, spread across the vast majority of U.S. states, it still often elicits a political controversy, pitting African American activists against municipal officials and fostering divisiveness centered around honoring the legacy of a man who devoted his life to bringing the races together. According to the article by Alderman, Spina, and Mitchell, a significant number of cities rename only part of a major street that runs through a city, so that Martin Luther King Boulevard passes through the historically black part of town, while the other half of the street (in the white neighborhoods) retains its old name. In other cases, towns have tried to compromise by simply dedicating the entire street in King’s honor, keeping the original street’s name but superimposing an “Honorary Martin Luther King Drive” atop each street sign, essentially giving the street two names. Perhaps the most obvious compromise—one that smacks of cowardice—is the naming of a limited access highway to the “Martin Luther King Expressway”, so that no businesses will ever claim it as an address. None of these solutions typically satisfy African American leaders, who believe a whole man deserves a whole street, and a real street in a real neighborhood, since neighborhoods were the focus of King’s initiatives. Sometimes the resistance against renaming has escalated to shouting matches at government meetings, boycotts of businesses, and even vandalism of street signs.

Why such opposition toward simply changing a street’s name? Many of the remonstrators are business owners, who claim that a road name change is an insurmountable financial inconvenience, although one before/after assessment in Eugene, Oregon revealed that the economic impact of a name change in 2004 was infinitesimal. In all likelihood, few partisans have a genuine aversion toward Dr. King and his work. The broader underlying concern is an unfortunate stigma attached to streets named after the man: in far too many instances, the street has become synonymous with parts of town that are crime-ridden and severely economically depressed. As comedian Chris Rock famously identified, if you’re lost on a Martin Luther King Boulevard, the best thing to do is run! Thus, most business owners in all likelihood fear that a name change will deter clientele, fearful of perceived crime in the area, from patronizing their stores. Many of the renaming decisions deliberately avoided controversy by honoring exclusively the business corridors in African American parts of town, without frustrating white business owners by associating their enterprise with a lower income African American neighborhood.

Are these Martin Luther King Boulevards really that bad? The fact remains that many were still legitimate business corridors for African Americans at the time of their renaming, let alone during King’s lifetime. However, a number of them have lost their centrality within the African American community, generally due to a number of factors: 1) civil rights laws and anti-segregation ordinances opened up housing opportunities for blacks, removing the restrictions to only certain quadrants within town; 2) upward mobility among African Americans with greater educational opportunities enhanced their ability to seek more prestigious housing and better schools in middle class and affluent areas; 3) businesses were legally prohibited from discriminating by skin color, giving blacks the opportunity to shop at mainstream retailers and reducing the dependency on black owned and operated enterprises. The removal of these barriers to entry facilitated an African American flight that quietly echoed—and, unfortunately, in some cases helped to intensify—white flight. At its crudest simplification, neighborhoods that were once white became mostly black, and neighborhoods that were once black became mostly depopulated. The result is the perpetual location-based tension generated when a proposed Martin Luther King boulevard runs through both the white and black parts of town.

Indianapolis’s Martin Luther King Street, established in 1985, follows a fairly conventional trajectory. As is the case in most larger cities, it comprises part of a much longer street, and the portion that runs through one of the city’s oldest African American neighborhoods changed from an original name of Northwestern Avenue. The name shifts again from Martin Luther King Drive to Michigan Road at the point north of 38th Street, a major east-west arterial. The Michigan Road portion of the street services predominantly white neighborhoods and continues well into the affluent suburbs and countryside. Local advocates have gently pushed mild initiatives to rename the Michigan Road portion in honor of Dr. King as well. Unsurprisingly, responses have elicited internecine tension, but after several neighborhood leaders argued that the name “Michigan Road” in itself also recognized a historic arterial (and major route along the Underground Railroad) the dispute largely dissolved; the new mayor has not taken a stand and has no plans to rename part of the street.

One trend that further complicates these scattershot rename controversies is the fact that streets named after Dr. King are not uniformly poor and distressed across the country. The article in Planning magazine acknowledges that Milwaukee, Seattle, and Portland’s boulevards are enjoying renovation. The blog MLK BLVD provides photojournalistic explorations of various streets named after Dr. King across the country, and it observes that Madison’s boulevard boasts some of the highest property values in the city, while Milwaukee’s boulevard is rapidly gentrifying through the efforts of entrepreneurial black professionals. Though still at an early stage of redevelopment, Indianapolis’ Martin Luther King Drive is less blighted than it was in the past, particularly the far south portion where these new condos stand. The southernmost point of the Drive passes begins at Indiana Avenue, the original African American Main Street, and continues northward. To the west is Ransom Place, a historically black neighborhood that is now mixed-race and, while not prime real estate, is generally in good repair with century-old homes that have largely been restored. To the east of the Drive are the Central Canal and all the research buildings and labs associated with the Indiana University Medical School, as well both historic housing and fairly new condos. Neither Chris Rock nor the protesting business owners were being entirely fair: clearly naming a street after the civil rights leader isn’t an indisputable death knell to the corridor’s economy.

The condos that form the focal point of blog appear just north of where Martin Luther King Drive intersects the street below, part of which has been renamed from 11th Street to honor this famous black Indianapolis-born basketball player: 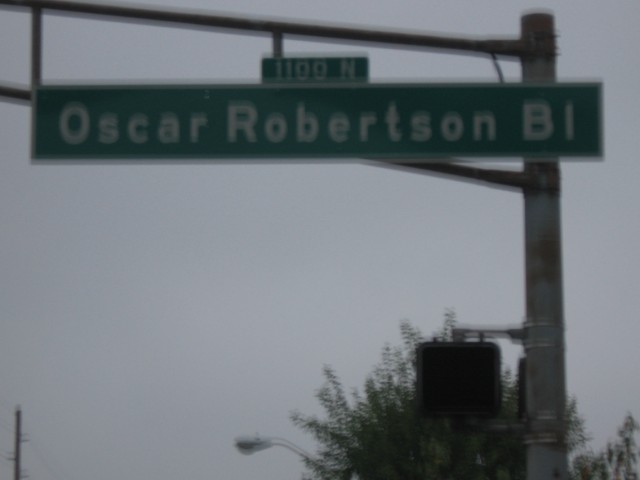 Across the street from the condos is the Crispus Attucks High School, a designated African American school dating from the emergence of segregation in the city in 1927. Now part of the National Register of Historic Places and a medical magnet school, it features a museum and is currently undergoing a significant renovation. Nearby is an older, stable African American neighborhood, north of Ransom Place, with bungalows dating from the 1940s. Vacancies around here appear to be low. I couldn’t fully determine the occupancy of these new condominiums, but judging from the current appearance (apologies for the blurred photo) at least three no longer have “for sale” signs: 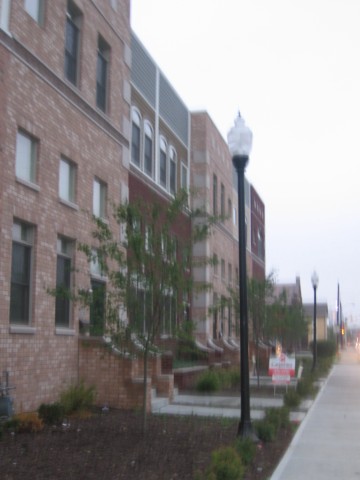 CorrND offers some excellent photos from the later stages of development of this project from the summer of 2008, as well as the pricing scheme in his blog Dig-B. Pivoting 180 degrees from the above photo, I could tell from the recurrent lanterns and added signage that the developers have the full intent of replicating this townhome pattern directly to the north of the current site: 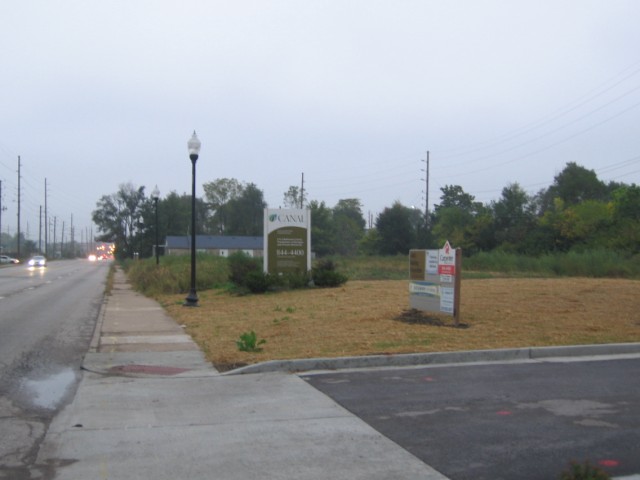 Despite the telltale evidence of redevelopment along this portion of the corridor, these developers have taken an unusual risk in a neighborhood that could easily have resisted it, both literally—in terms of long-standing African American residents arguing it ushers the gentrification that might price them out of their own homes—or figuratively, in terms of not finding sufficient demand among the targeted demographic. Whether or not these market-rate condos will flourish hinges upon finding a population willing to invest in property that rests on a street most frequently associated with a multitude of urban ills, even if that association no longer aligns with reality.

The evolution of this development—filled with homeowners and not renters, mind you—is definitely worth watching as a microcosmic glance at the progress of race relations in Indianapolis. Some may criticize me of applying the representativeness heuristic by making this bold claim. How can one use a tiny urban condo project to gauge larger racial integration trends? After all, aren’t monumental actions like the election of the first nonwhite president a stronger bellwether of racial reconciliation, while the emotionally charged reactions to health care reform might suggest we still have a way to go? Regardless of one’s political stance on those issues, I can’t help think that small mundane gestures (such as the sell-out of a condo building in a risky location) are far more indicative of sociocultural relations than a widespread, nationally visible social movement. It’s not how we react to revolutions, where the intensity of the emotions is high and our reaction is likely to be equally intensely negative or positive—its our individualized, often scarcely conscious response to banal, quotidian incidents like selling a home. If the buyers at Canal Gardens turn out to be a nothing but cluster of African American professionals, fostering a gentrification comparable to what appears to be happening in Milwaukee, it may arouse less neighborhood invidiousness but it is also scarcely indicative of progress in race relations. If white professionals buy into these townhomes—or, better yet, a variety of races buy them—it would support the notion that shared yuppiehood transcends both skin color and a neighborhood’s historically negative reputation, even when that reputation is purely based on a street’s name.

PrevAnswering the question posed by stairs to nowhere.
Photo upgrades and references.Next

7 thoughts on “Can a street name influence the local economy?”