Call it a slow news day, but if it isn’t clear already, I’m smitten with the mundane. And I hardly think it’s bold for me to assert that the need to exercise a vote has become increasingly assimilated into daily activities. We can scarcely navigate the World Wide Web through our various browsers for five minutes before a pop-up or an advertisement on the margins is asking us to cast a ballot for something. Some of the most popular reality television series—a genre that hardly existed twenty years ago—involve some of the contestants voting other members off the show itself, or, as a further boost to those Nielsen ratings, allowing the viewing audience itself to vote for the winners.

Many of these cultural gestures are manifesting themselves globally, abetted by technological improvements and an increasingly sophisticated infrastructure that enhances individuals’ abilities to participate in countless overlapping communication networks. But are Americans perhaps more bombarded with ballot initiatives than others? And if so, could it be because they prefer it?

In The Right Nation, John Micklethwait and Adrian Wooldridge, two writers from the Economist deconstruct America’s intrinsic leaning toward conservatism, and one of their principal observations is the country’s love of direct democracy, despite being a federal public ultimately beholden to elected representation. “Americans are nervous even about handing over power to their elected representatives. It is the only developed country apart from Switzerland where referenda are common.” Such an assertion may confound those who consistently hear that the United States has some of the lowest voter participation levels in the developed world as well. When a major election approaches (such as the Presidential election), major networks such as CNN or Fox News devote nearly 50% of their air time to coverage and analysis of details, some of which seem (and prove) to be of infinitesimal importance. Yet when the time comes to submit the ballot, Americans stay away: even after the milestones achieved in the 2008, less than 60% of the voting age population showed up at the polls.

This demonstrates a strange paradox in American attitudes toward participation in voting in general. We/they seem to like the idea of voting, judging by the increasing options the private market is offering to “rock the vote” in one way, shape or form. But we often shy away from elections that directly pertain to governance. Perhaps Micklethwait and Wooldridge are on to something when they say Americans are nervous about handing power over to representatives, even if their explanation—we like ballot initiatives more than just about anywhere else—deserves greater elaboration than they provide. Most states allow some form of referrals of the state legislature to the people on major legislative acts (such as amendments to the constitutions), nearly half allow ballot initiatives of some form, and various municipal governments across the country actively integrate referenda into major elections. By some arguments, an over-reliance on ballot initiatives only serves to undermine the trust we might otherwise instill in our public servants, and other countries demonstrate far greater faith by eschewing referenda that their representatives are going to serve their elected roles responsibly. Like any remotely complicated causal nexus, the chicken and the egg apply here: no doubt most Americans who support direct democracy do so precisely because of lack of confidence in elected leadership. Such disillusionment may also justify low participation levels in major elections: a bifurcated electorate manifests this disdain for representative democracy by either overriding officials’ authority through direct ballot initiatives or non-participation in the voting process altogether.

I’m scarcely going to sneer that voter turnout has been higher for final episodes of American Idol than it is for presidential elections; enough other cultural critics on the blogosphere are doing so and I don’t feel it’s a particularly productive polemic. No amount of railing against “what this says about our society” is going to change the fact that a nation of widely divergent values and traditions is unlikely to find much of anything under which it can so easily organize or mobilize. That more people have direct, convenient access to televisions, telephones, and the Internet than to polling stations (including the millions who cannot legally vote) is only one factor of many.

So, rather than dwelling on problematic voter turnout for “the big ones” (whether that be Barack Obama or Adam Lambert), I’ll again focus on the more ordinary examples of ballot initiatives scattered across this great land—an ordinariness suitable of a website called American Dirt, like this example at a rest area near a scenic lookout point of a canyon on an infrequently-traveled state highway just west of Taos, New Mexico: 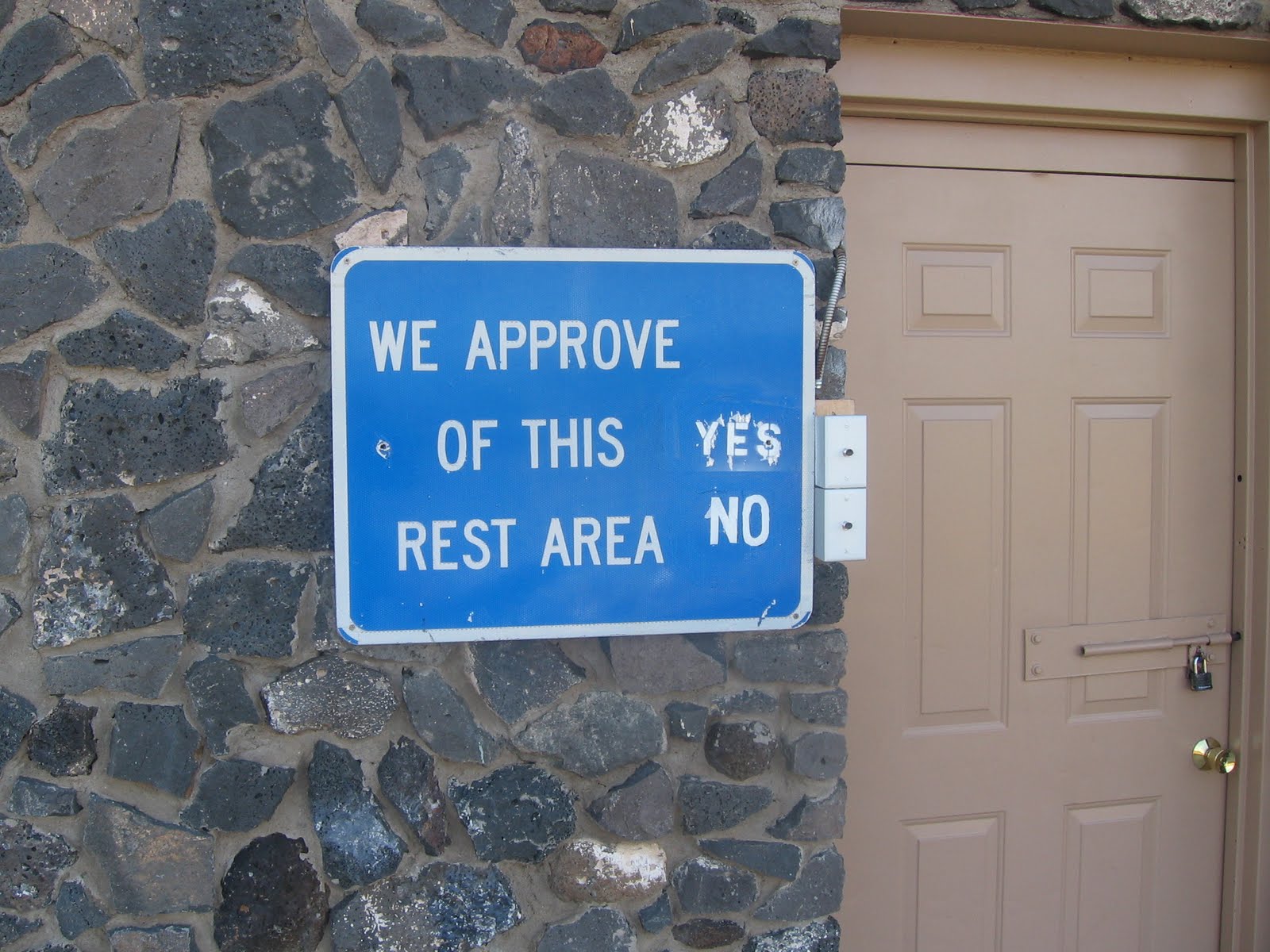 I guess the voting buttons to the right of the sign indicate the users’ feelings regarding the care and cleanliness of these restrooms; I could hardly have been a judge, since, as is obvious, the door to the restrooms was padlocked shut. It was about 5pm on a comfortable day in August. But even if the restrooms had been open, how exactly would this have worked? Could they actually be asking for users’ opinions on the very existence of this rest area? Do they really expect an honest example, and do they have a means of precluding ballot stuffing? And why does it appear that the lettering for the word “Yes” appears to be stenciled in, using a different typeface from everything else on the sign?

This sign suggests to me that the State of New Mexico is operating much the same fashion as various polls conducted by Newsmax and other agencies choking the vacant add space across the web—they both are fixated on the essence of empowerment that voting proffers upon the people, rather than the actuality. It seems all the more pessimistic when a state entity that actually has the power to initiate legally binding elections still resorts to this vague “polling” at an unmanned station—the governmental equivalent to waving a butterfly net around. In an era where shrinking state budgets are resulting in massive closures of rest areas across the country, couldn’t an unconfident legislature submit a ballot to the constituents of New Mexico if they really wanted an accurate gauge of the efficacy and popularity of rest areas? Couldn’t a careful monitoring of the use of paper towels or water from toilet flushes determine whether or not the rest area was deemed acceptable enough that people are using it? In a sparsely populated state such as New Mexico, truck stops and fast food chains are few and far between, posing less competition to rest areas than they might in, say, Ohio, so their continued operation could prove a more pressing concern. But if I were a taxpayer in New Mexico who was vexed that the state couldn’t properly maintain its rest areas, I most likely could voice my frustration by pressing the “No” button fifty times in succession. Or perhaps I might just be annoyed that the state was spending money on something I thought frivolous—and then not even granting me access.

PrevMaking right turns a bit easier—is it always a good thing?
Stairways as an unanswered question.Next