“What street am I on?” says the pedestrian.

In the late 1980s and early 1990s, the majority of large US cities began upgrading their street signage at major intersections, replacing smaller (approximate 18”) fixtures projecting from a corner street pole with much larger (3 to 4’) signs, which they share with the masts for stop lights or cables strung across the street. Clearly these upgrades improve the visibility of street signs, though they generally target one viewer in particular: the motorist.

In Indianapolis, the smaller signs typically featured black lettering on a white background; a few telltale, faded remnants of these signs remain today, mostly in outlying residential areas. The replacement signs use white lettering on green, which in many ways is less distinctive but easier to read and to identify amidst a multicolored backdrop. However, the intersection below, in downtown Indianapolis looking at Alabama Street where it intersects with New York Street, reveals a serious oversight: 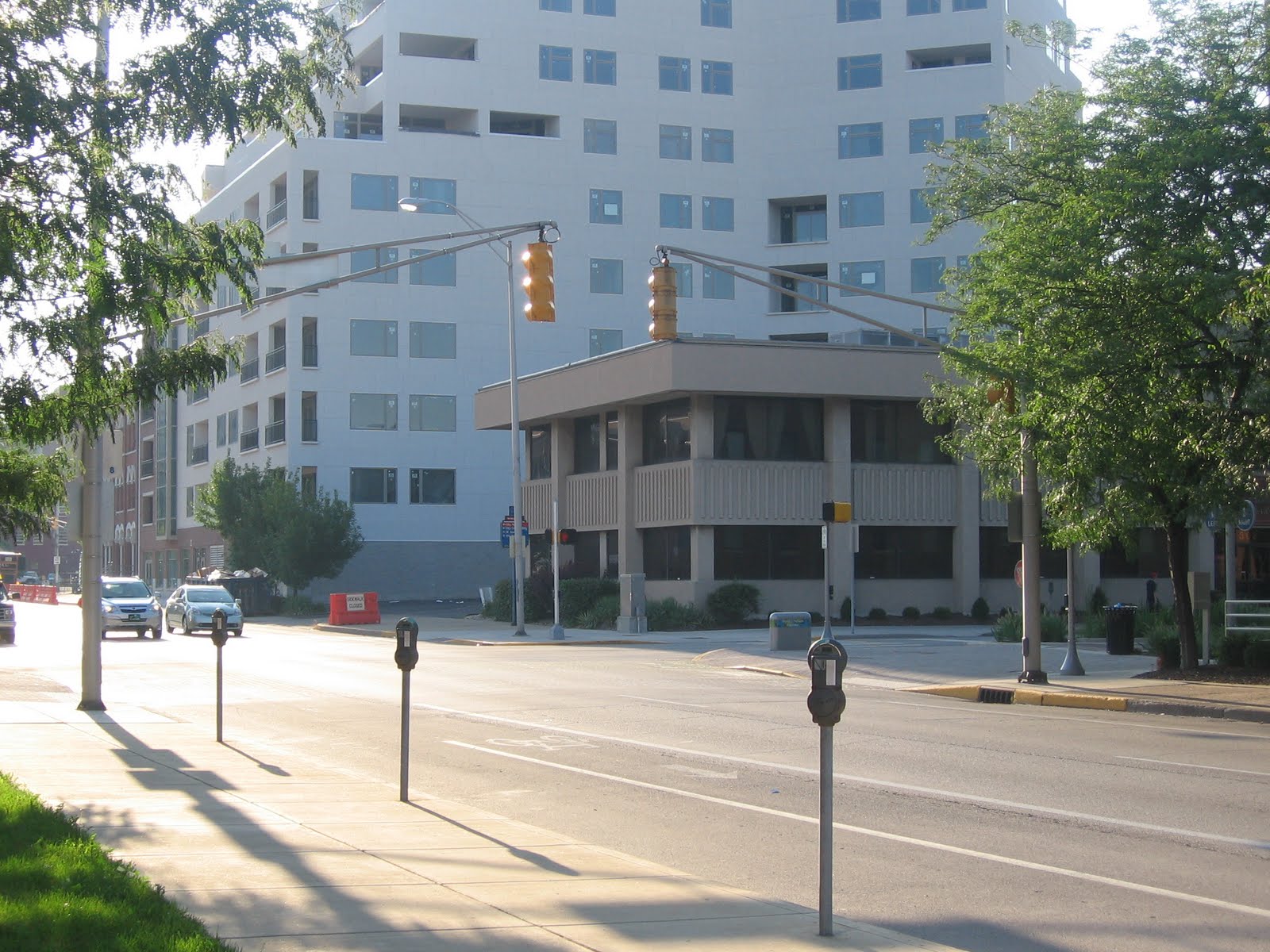 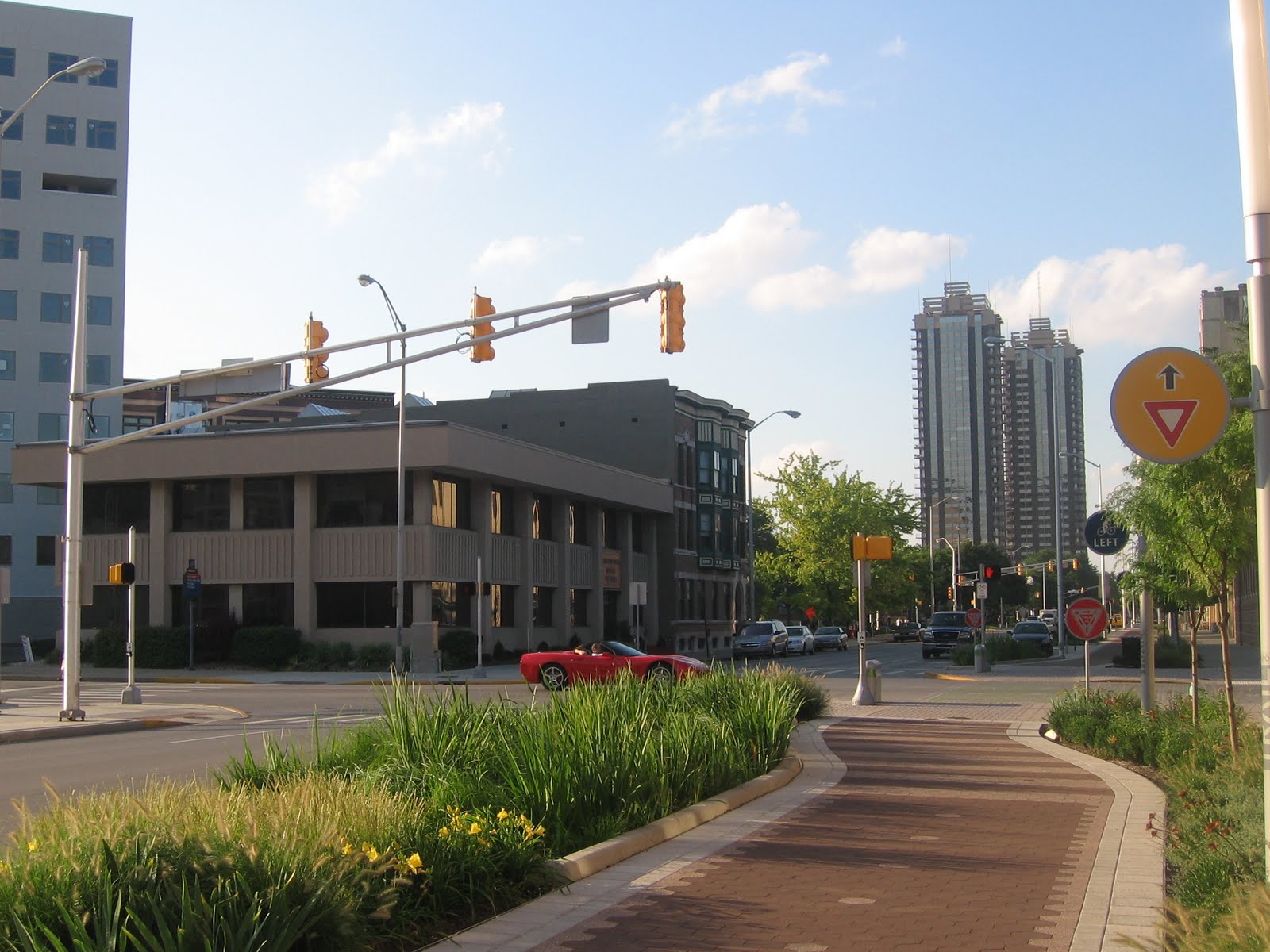 No visible sign again. Alabama is a one-way southbound street, and I am looking to the north. In both cases, the intersection has a street sign—the only problem is that it favors people driving along the one-way streets in their cars. You can see the back side of it here: 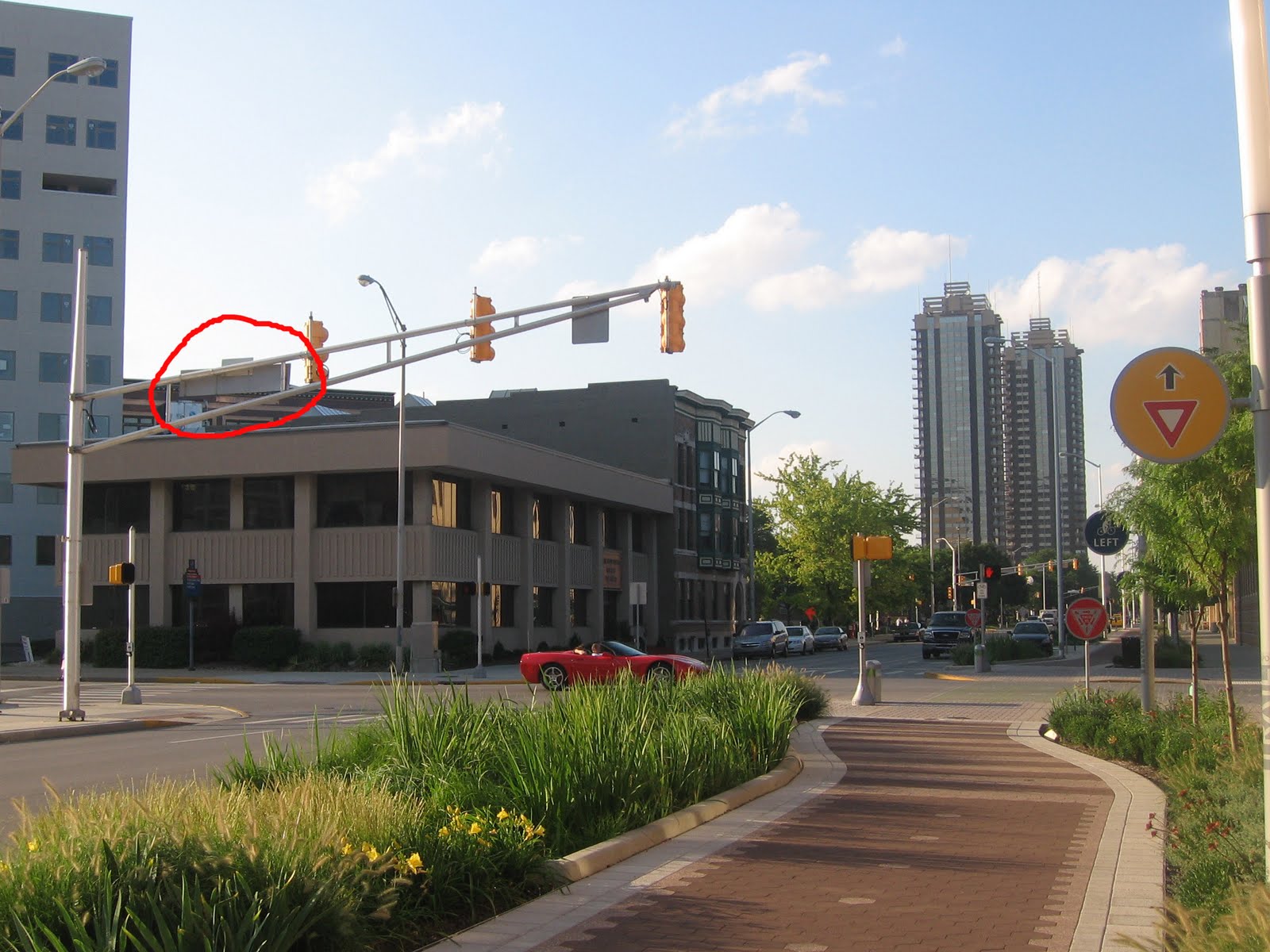 Thus, pedestrians unfamiliar with the city may lose track of what street they’re on, and, if they’re going in opposition to the direction of automobiles on a one-way street, they won’t see signage at any distance. On two-way streets, this does not usually pose a problem. But a pedestrian on Alabama Street essentially has to walk right up to the sign and crane the neck backwards to learn that the intersecting street is New York Street. This is particularly embarrassing since Alabama Street here benefits from the accents of the Cultural Trail (seen to the right on the last photo above), which specifically accommodates pedestrians and bicyclists. A block south on Alabama Street, standing in the Cultural Trail, again looking to the north, there is not a street sign in sight: 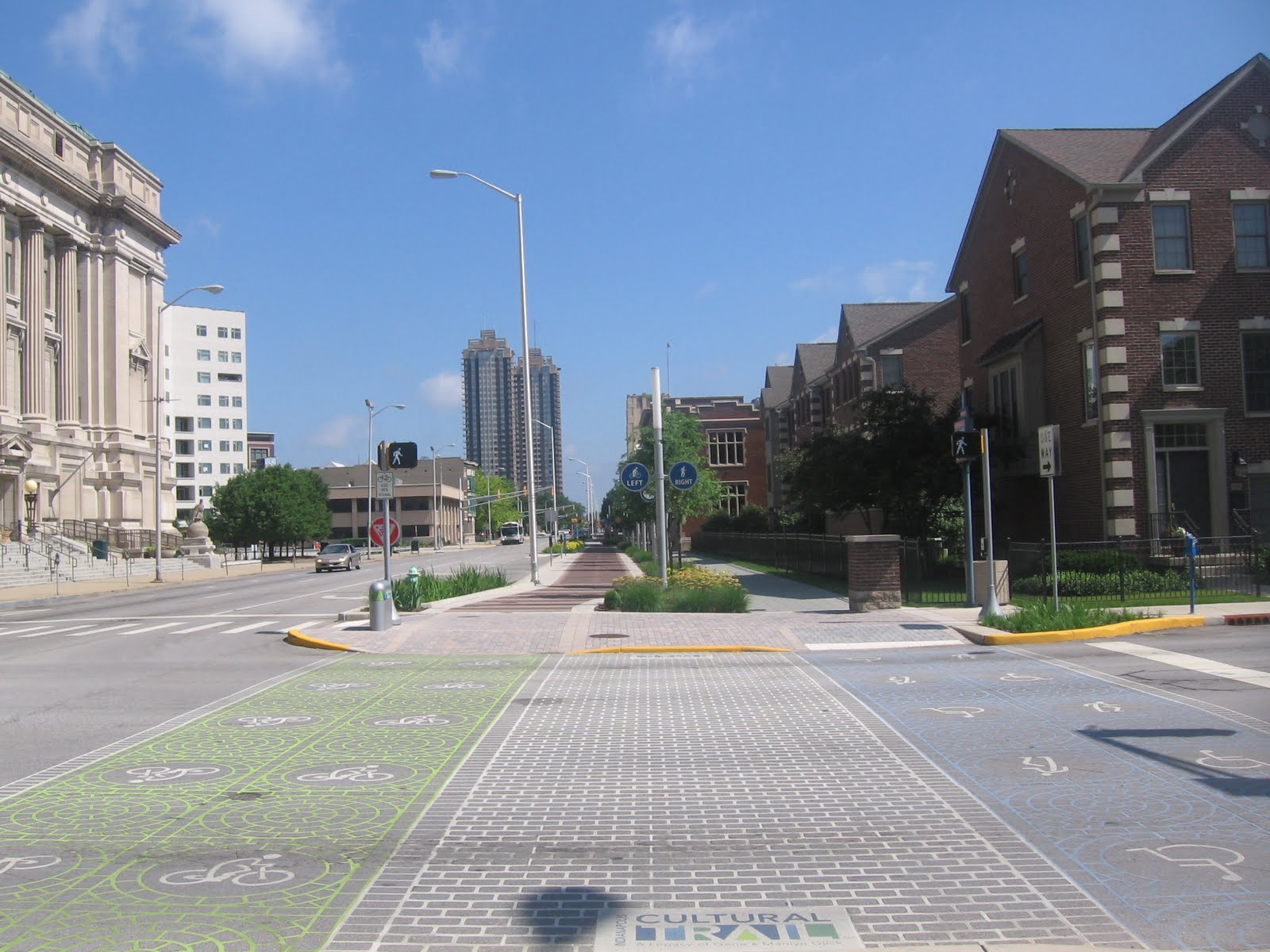 Thus, we see a problem hardly unique to Indianapolis: most signage infrastructure is scaled and tailored to drivers in cars only, as though pedestrians, who have the luxury to walk either direction on a one-way street, simply don’t need signs. About the only place in Indianapolis’ downtown where pedestrians can see signs regardless of whether they’re walking along a one-way or two-way street is in the Wholesale District, where streets signs hang along the masts next to the stop lights, as well as the old-fashioned way, protruding from the corner street pole at right angles, such as the picture below: 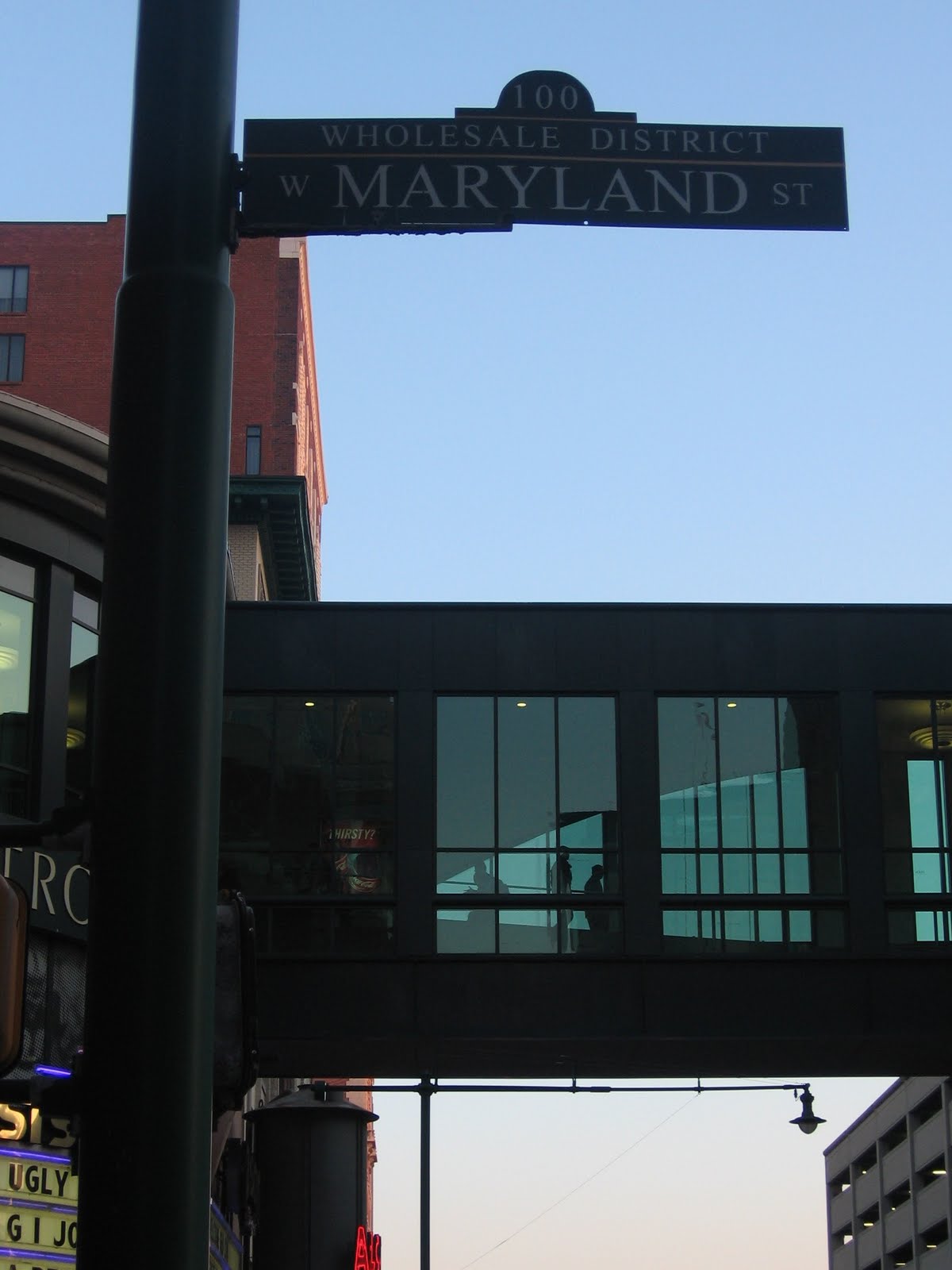 However, even in the Wholesale District, the signage is far from perfect or consistent. Notice this view down Washington Street: 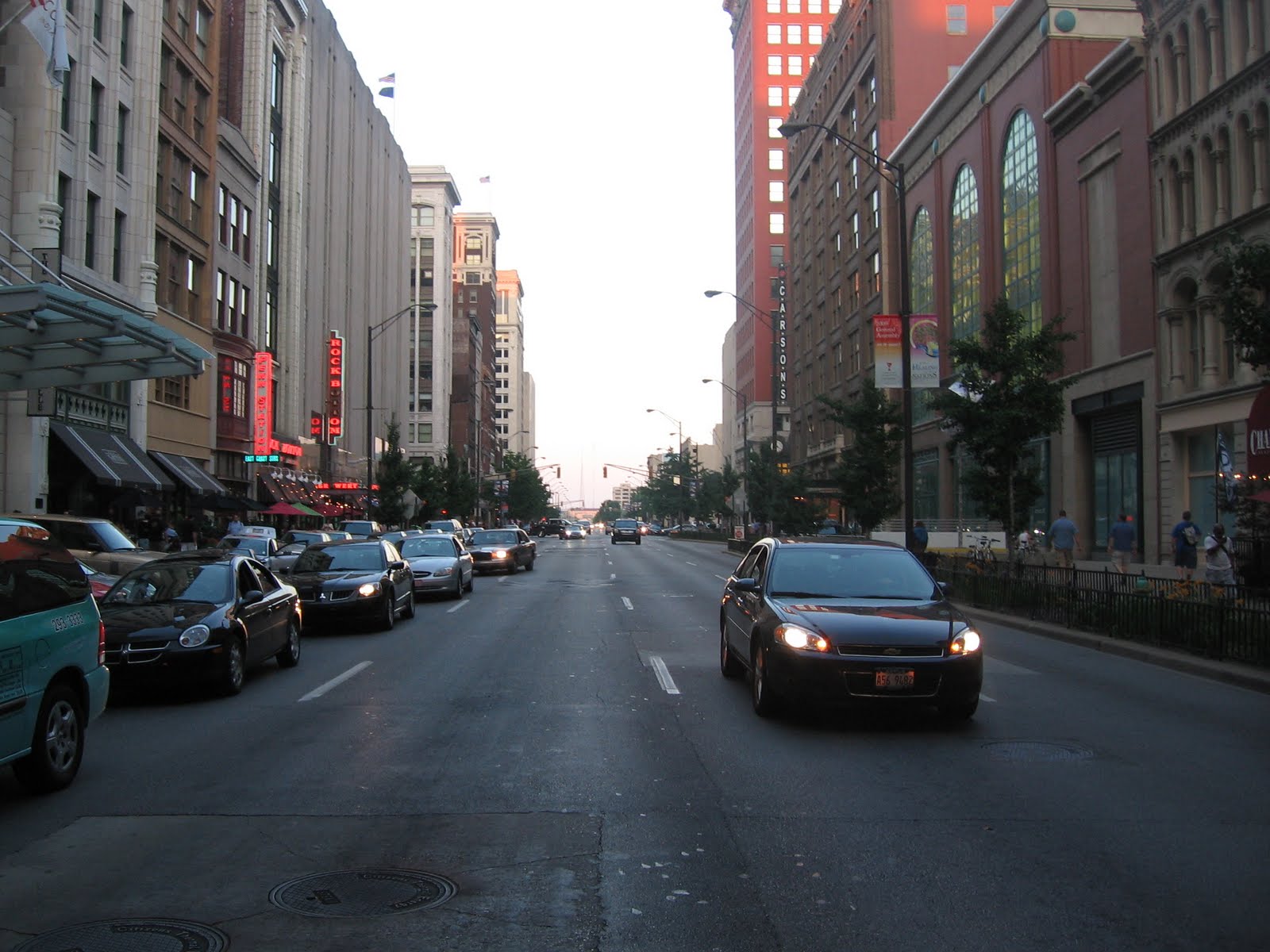 If a person is walking opposite the flow of traffic on a one-way street, he or she will not see signs for the intersecting streets for any great distance. The specialized Wholesale District attached to the street poles are far too small, showing again that signs are tailored to meet the needs of drivers only.

These large signs attached to stoplight masts pose a bigger problem at the city’s many three-way intersections. The downtown signage, when visible, is bold and clear, as seen below: 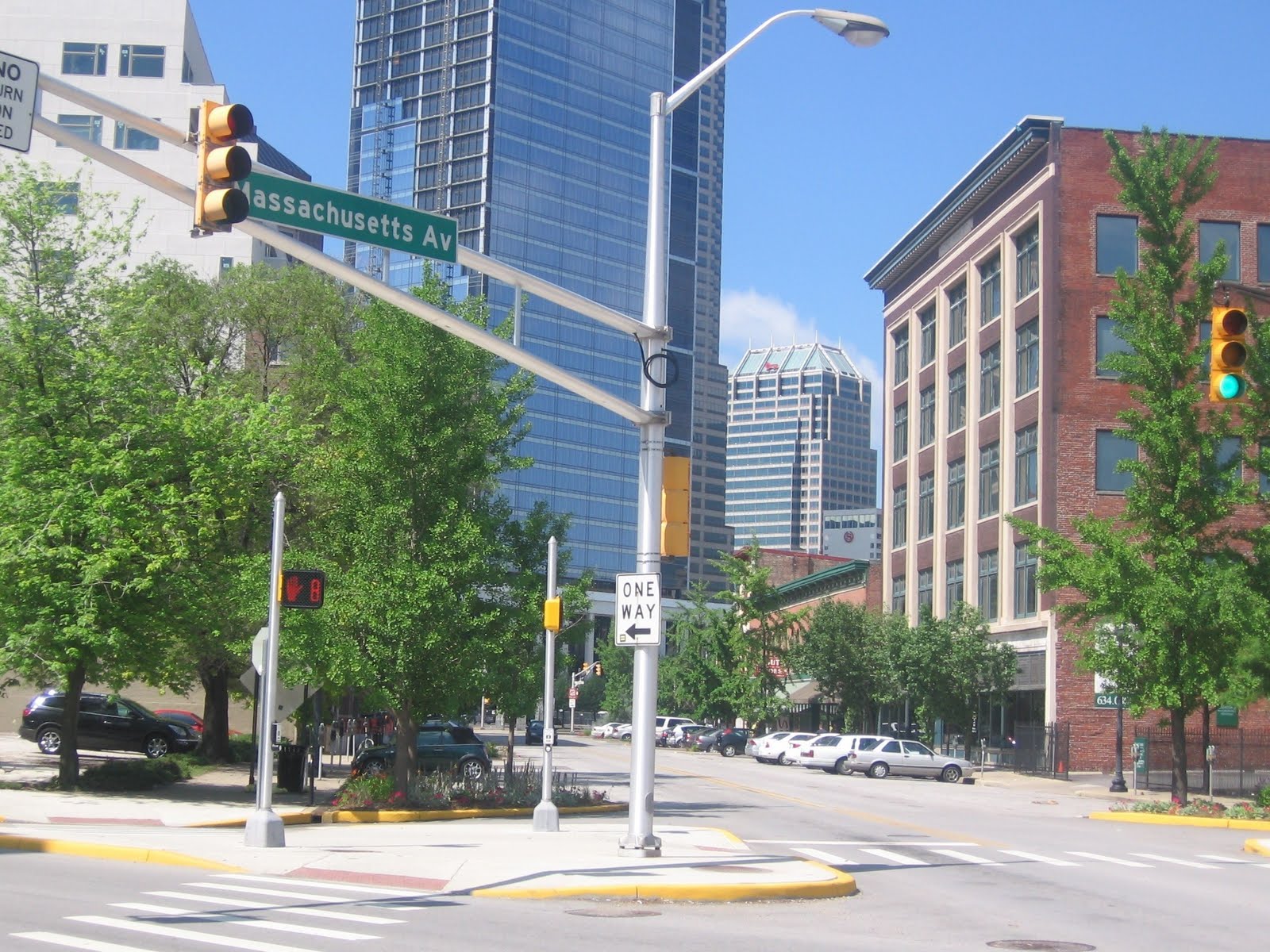 That’s great and all, but this is a three-way intersection in which two of the three streets are one way. The direction of the masts does not always clearly distinguish the street that is directly perpendicular from the one at 45 degrees. And the one-way street featured here (clearly indicated by the sign in the dead center of the photograph) again demonstrates the confusion a pedestrian is likely to face if walking against the flow of cars. A simple solution, of course, would be to simply affix street signs to both the front and the back of the mast, next to the stop lights. But it does not solve the problem of deciphering which way the mast is pointing in a three-way intersection. Many European cities simply attach or paint the street name to the sides of buildings at that intersection. Unfortunately, most US cities have nowhere near the building density to do this, since many intersections simply hold parking lots flush to the street intersection. (I’m also not convinced the European method is that good because there it is hard for signage consistency when the background it rests on—the building itself—can come in a variety of colors, materials, and design features.) Also, street signs in cities with a very clear block numbering system should always indicate the direction of travel and the block number: for example, the 500 Block of New York Street East. Nearly all street signs in Indianapolis feature this information (far better than many other cities I’ve seen), so it’s a shame this is missing in this instance.

I’m not sure if Public Works is responsible for this street sign shortcoming. In most cases, it would be, but a downtown Business Improvement District (BID) often handles features such as these within the BID’s clearly defined boundaries. Thus, I suspect that either Indianapolis Downtown Inc or the Convention and Visitors Association would show a greater concern for the city’s navigability from the pedestrian angle; these two organizations most likely care for the historic district signage that makes the Wholesale District much more clearly marked. The utilitarian Public Works Department has standards etched in stone from which it will hardly deviate simply because it’s a downtown.

What seems like a minor detail can become a formidable sore spot for a city if it is trying to attract or retain a large presence of out-of-towners, which Indianapolis is doing. Contrast this with New Orleans, a city which wins no great awards for street signage; even before Katrina, no American city I have seen was missing more signs, and virtually no downtown intersections have pedestrian crossing signals (all intersections in Indianapolis do). But at least the Downtown Development District of New Orleans took care to mark both sides of the mast with clear street signs. Most wayfinding signs in Indianapolis are quite good; the use of a quadrant system for breaking the downtown into smaller parts seems to have worked now for well over a decade. But a confusing downtown for pedestrians is automatically a less appealing one, and can have significant repercussions for the thriving convention industry if visitors struggle to situate themselves in a city center.

PrevThe exodus is complete.
“Please do not park here again.”Next

One thought on ““What street am I on?” says the pedestrian.”