Waterfronts that fail to make waves.

For those Indianapolis residents who remain forlorn about the current state of the Canal Walk—or for those who think it stands as an archetype for urban development—I present another waterway below street level that demonstrates similar challenges: the Providence River in downtown Providence, and its man-made tributaries.

In some ways the Rhode Island capital has followed an almost identical trajectory as Indianapolis, in terms of megaprojects used to stimulate the downtown.One could almost argue that Providence mimicked Indianapolis, or vise versa, except that these are broadly general urban revitalization gestures implemented in a number of cities. Indianapolis and Providence simply seem to be yielding remarkably similar results. Among the projects: a carefully disguised multi-story shopping mall (which is still successful, unlike downtown malls in many cities), an expanded convention center nearby, and—most germane for this analysis—the subsurface waterway allowing for running, biking, and gondola rides. The pictures below show the riverfront in Providence at its widest point. 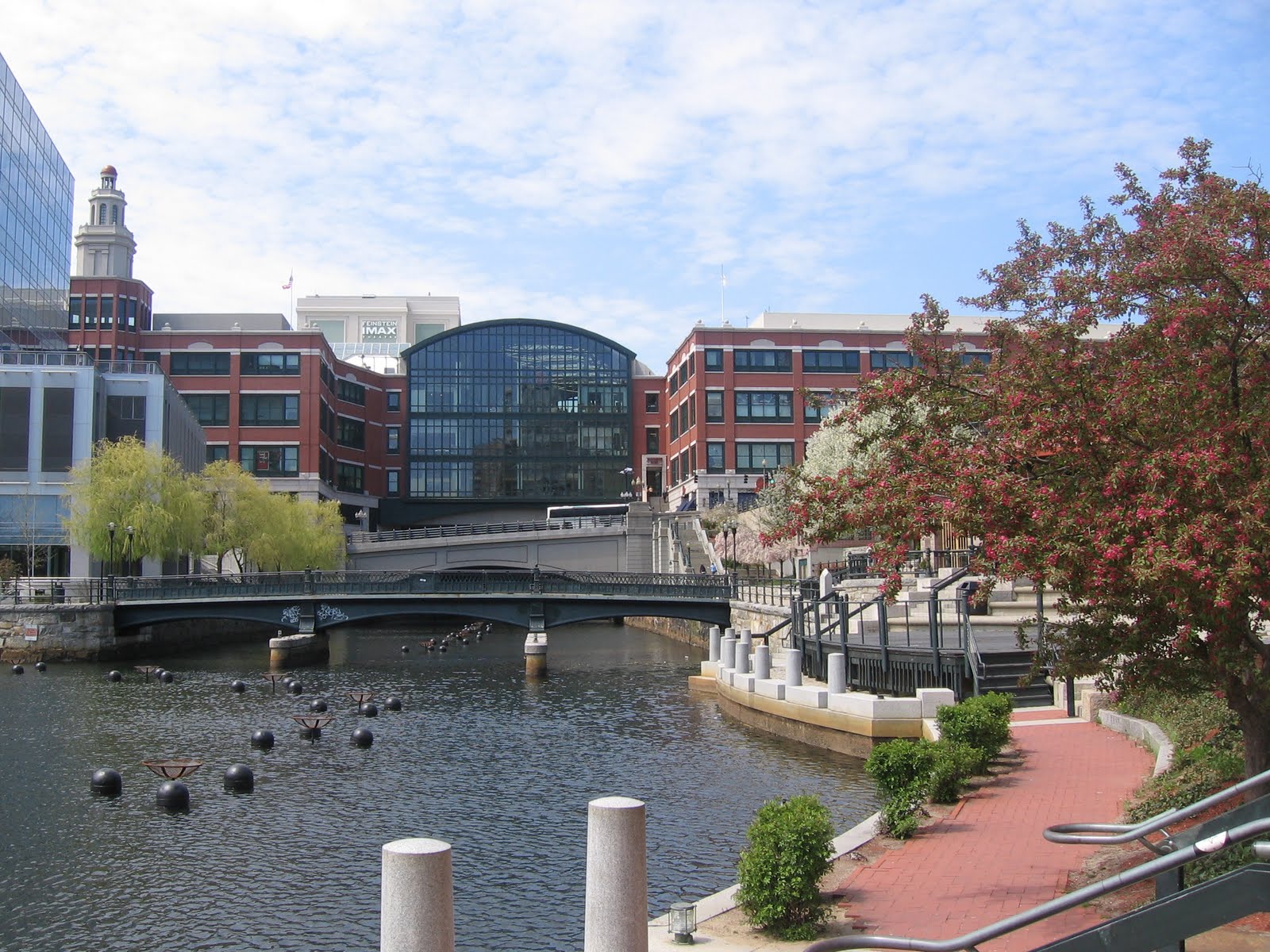 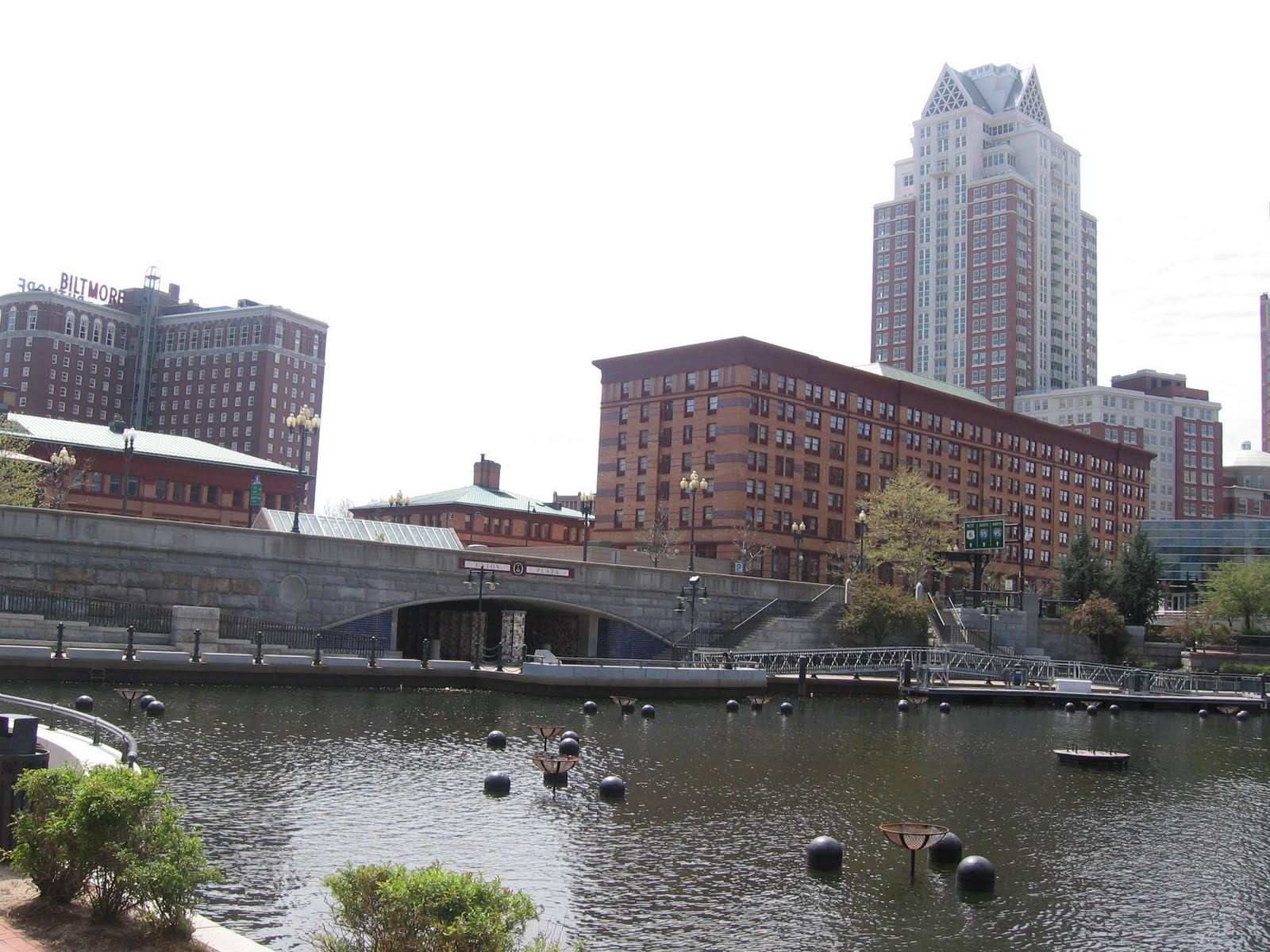 However, much of it is comparable in scale to the Canal Walk, if slightly wider and a bit closer to the surface. 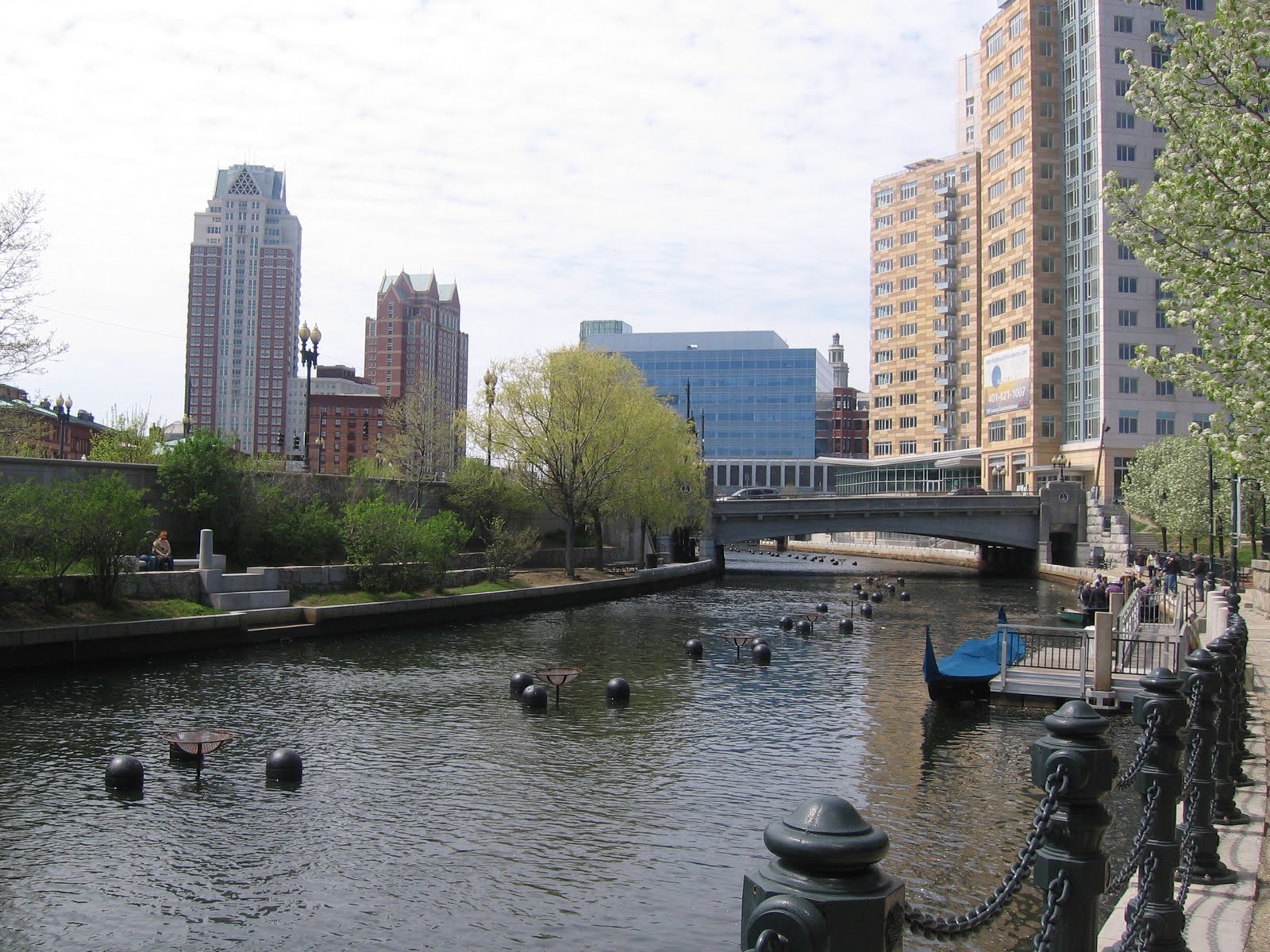 Though the Providence riverfront does not emphasize museums and monuments to the same degree as Indy’s Canal Walk, it features at least one restaurant with a similar pedestrian engagement to Buggs’ Temple, as well as a small amphitheater with terraced seating. Most significant, however, is the seasonal WaterFire event.The objects you see floating in the river in the photos above are braziers that support aeromatic wood which burns heavily on event nights, drawing people to the river’s banks to watch the reflective glow as gondolas veer precariously among them, stoking the flames and dousing them at midnight. Artist Barnaby Evans introduced this spectacle in the early 1990s and it has evolved to a local tradition along the river, supported largely through voluntary donations (it operates as a 501(c)(3) arts organization). For almost anyone who hasn’t visited Providence, it behooves you to coordinate a visit during the selected Saturdays twice a month from May to October that the city hosts WaterFire. To me, it represents public art as a triumph of semantic ambiguity. It attracts all strata in a city that, across many neighborhoods, is scarred by decades of class tension and deindustrialization, and it would not have half the appeal if people could clearly describe what they’re looking or what it means.Evans has shrewdly avoided instilling it with a metaphoric content, but it nonetheless brings as many people to the Providence River as a typical Independence Day fireworks display…despite the fact that it happens multiple times a year. Unfortunately, WaterFire can no longer brand itself as unique—Columbus and Kansas City have introduced it to their rivers at a smaller scale—but Providence is the city where it began, and the crowds it draws surpass anything I’ve ever seen along the Indianapolis Canal Walk.

Despite this creative infusion of art and design largely accredited to Providence’s revitalization as a city (no doubt hyperbolically so), I am not convinced that Providence’s riverfront development is any more successful than that of Indianapolis. It still suffers from poor land use management after the initial implementation, so it, too, offers its fair share of blank walls and uninspired office buildings along its banks. The above pictures should reveal much of this. Despite a relatively straightforward layout—it encompasses part of the Providence River and an associated canal—the clean visual path of the water clashes with a cluttered, unarticulated pedestrian infrastructure, filled with superfluous twists and turns, changes in incline and programmatic use (ramps and stairs are everywhere) and inconsistencies where the path drops off on one side of the river, or dead-ends altogether. Many of these impediments can easily be remedied, but at this point—unlike Indianapolis’ Canal Walk—they make it hard for bicyclists or runners to use, and, while Providence thus shares this feature with San Antonio’s similarly labyrinthine Paseo del Rio, at least San Antonio offers a lot more commercial activity alongside its banks, as well as uses on the river that enhance the pedestrian’s mobility options. The visual message of Providence’s riverfront is less pronounced than either Indianapolis or San Antonio, despite the fact that the original designers seem to have crammed the walkways with activities—or perhaps the diluted impression the waterfront leaves is a direct consequence of all of those extra details. WaterFire provides the strongest articulation of the Providence’s River’s centrality in the city, though that only happens a few times a year.

In case my argument has failed to convince that Providence’s waterfront falls short of greatness—and it is by no means a bad effort—one only needs to observe real estate trends in the immediate vicinity.Just two blocks away from the river is this sad plot of land: 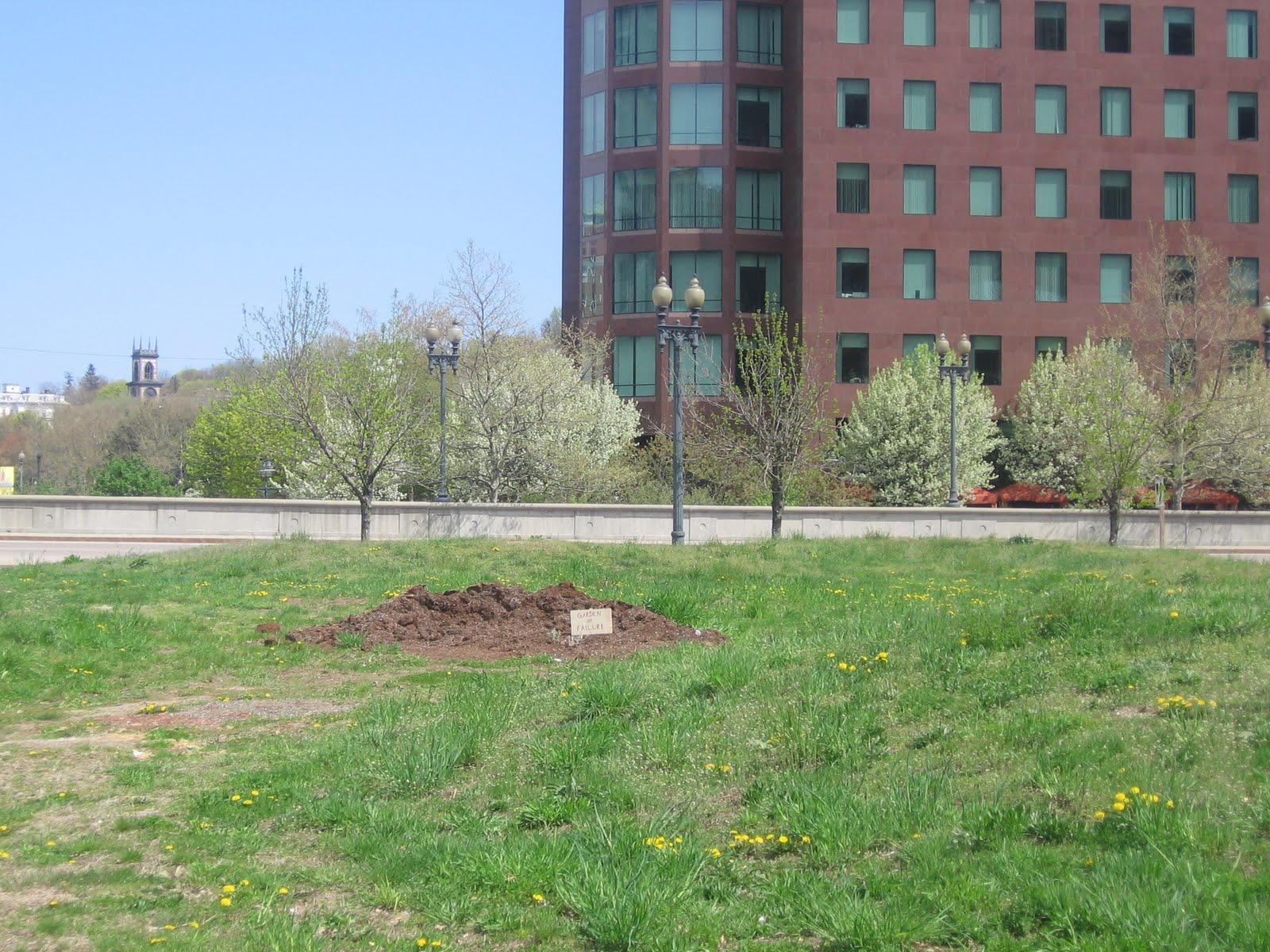 For those who can’t read the cardboard sign resting in the pile of dirt, it says “ Garden of Failure”. To me it recalls the ocean of parking lots just a bit more than a block to the east of the Canal Walk in Indianapolis. At one point, many years ago, some students at Ball State University hoped to stimulate condo development into these parking lots by actually grafting new parts of the canal at right angles to the actual waterway, thereby creating artificial “inlets” that would encourage condo construction, because, hey, everybody wants to live next to water. It’s actually a valid proposition, but I’m relieved it never materialized, because I remain convinced that if either Providence or Indianapolis had made their sub-surface waterfronts the fully vibrant destination they intended to be, market forces actually would have claimed the vacant land nearby, serving as a second-tier commercial/residential to compete with the truly top-of-the-line developments that directly front the canal. Alas, it has thus far failed to ignite in either city.But at least the Providence “Garden of Failure” still offers a more ecologically sound demonstration of moribund real estate—no impervious surfaces and some mild biodiversity.

Providence has, like Indianapolis, attempted high-end residential development directly along the river. 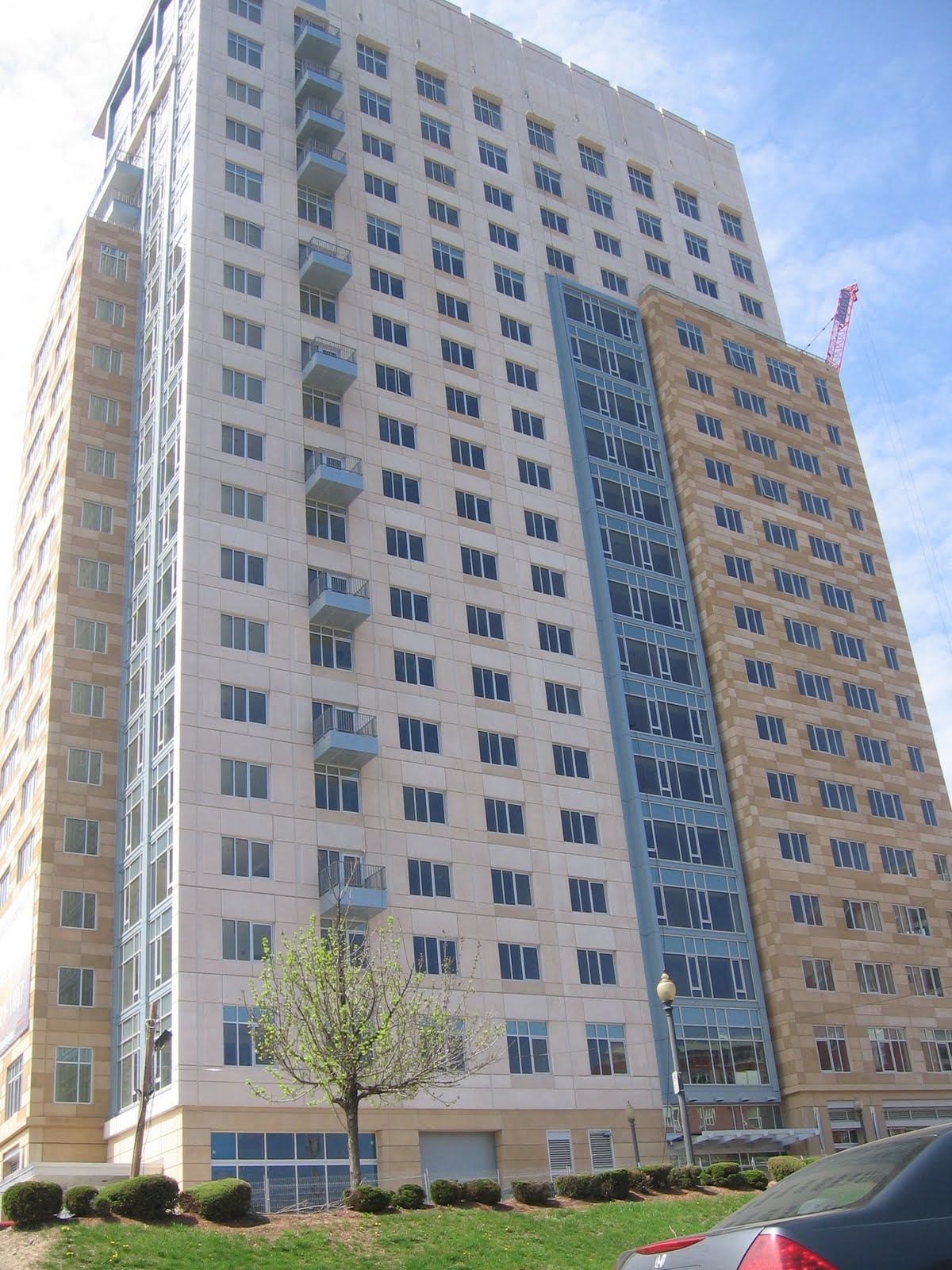 The Waterplace Condominiums—also visible to the far left in the third photo on this blog posting—generated considerable fanfare at the initial ribbon-cutting a few years ago, signifying that Providence was entering the big leagues for generating enough demand for downtown living to justify these formidable structures. By 2007, rumors abounded the preliminary sales were worrisomely slow. In today’s era of the subprime meltdown and ensuing foreclosure crisis, demand for luxury condos has plummeted to the point that the developer has demoted the building to an apartment/condo mix. But Providence made bigger news when a neighboring development, Capital Cove, signed a three-year agreement with Johnson and Wales University to lease the 96 condos as student housing—before the structure was even completed. Aside from this agreement providing to university undergraduates an unparalleled luxury compared to typical dorm accommodations, the Capital Cove negotiation has irked city leaders who see it as a violation of a tax treaty. The developer, who simply couldn’t sell the units, claims the only other option was to sell the building to Johnson and Wales, which would effectively remove it from the tax rolls, thereby crippling a city already falling short of anticipated tax revenue.On top of this, rumors abound that Waterplace may suffer the same fate: a short-term demotion to dormitory use.

The much less grandiose structures along the Indianapolis Canal Walk suggest that it has not yet suffered from residential overbuild, at least in this section of the canal. But developers in Providence have ostensibly overestimated the desirability of the waterfront, constructing units at a scale that even the San Antonio River Walk market might not be able to absorb. Clearly the design and development communities in both Indianapolis and Providence could share a slice of humble pie, acknowledging that they are now reaping the consequences of development and design carelessness from the past.Rather than expanding the magnitude of their respective cities’ waterfront plans, civic leadership should now concentrate more on improving what’s already there.

PrevWhere the Canal Walk first went wrong.
When urban revitalization is nothing more than a façade.Next