The exodus is complete.

I will always be apprehensive to post blighted urban scenes on this blog, particularly if it depicts residential disinvestment. First of all, I don’t want to exploit obvious signs of economic distress and poverty when it involves families, and photography can easily be very exploitative; secondly, even if my analyses attempt to deconstruct dire situations with the aim of understanding how to prevent or rectify them, I never want to turn the hapless subjects of these photographs into laboratory animals to gratify my own curiosity.


Yet I’m still posting the images below; I’ve overcome my hesitancy in this case. I feel I can make an exception in the pictures below because there are no longer people to exploit; any dwellers (at least legal ones) have moved out of this single block of rowhouses in Camden, NJ. All that is left are the homes themselves, and from these pictures you can see that I first approached the homes, then looked down the Arlington Street (barricaded by a row of tires), then pivoted to my right to take one last picture before leaving the scene. 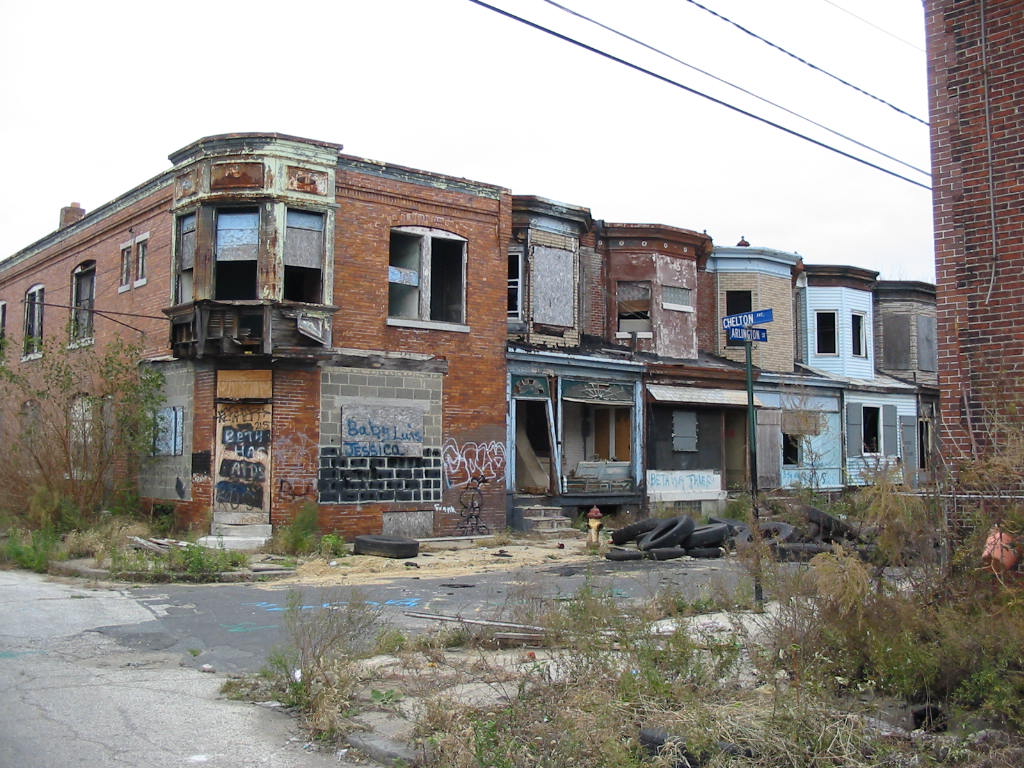 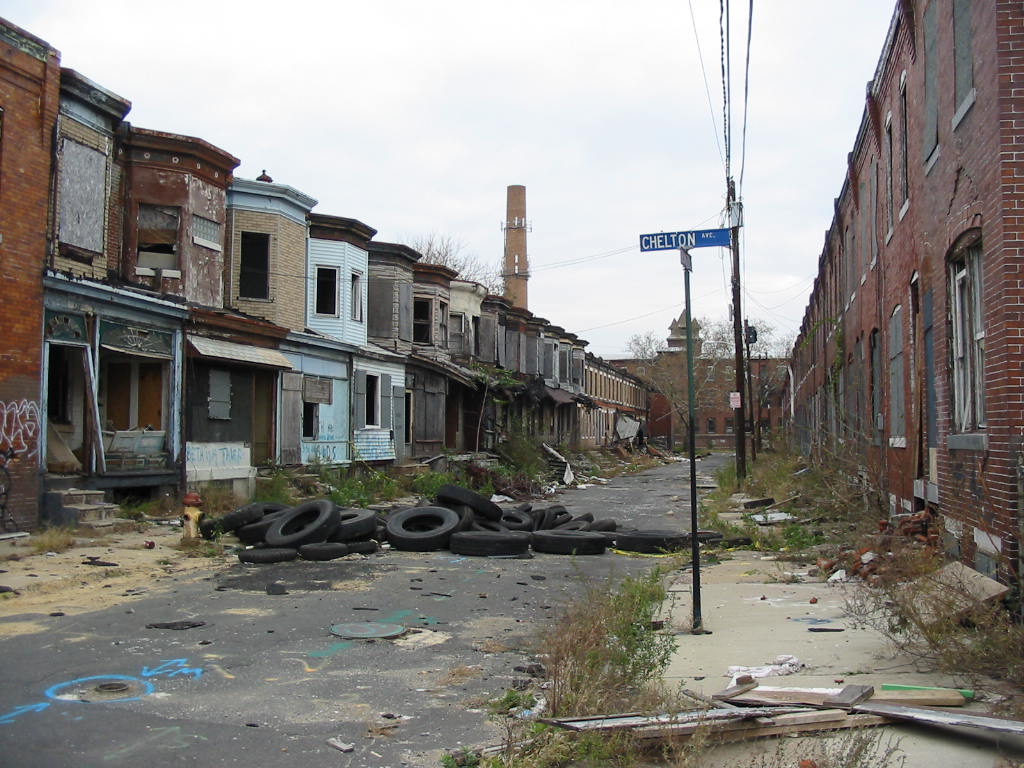 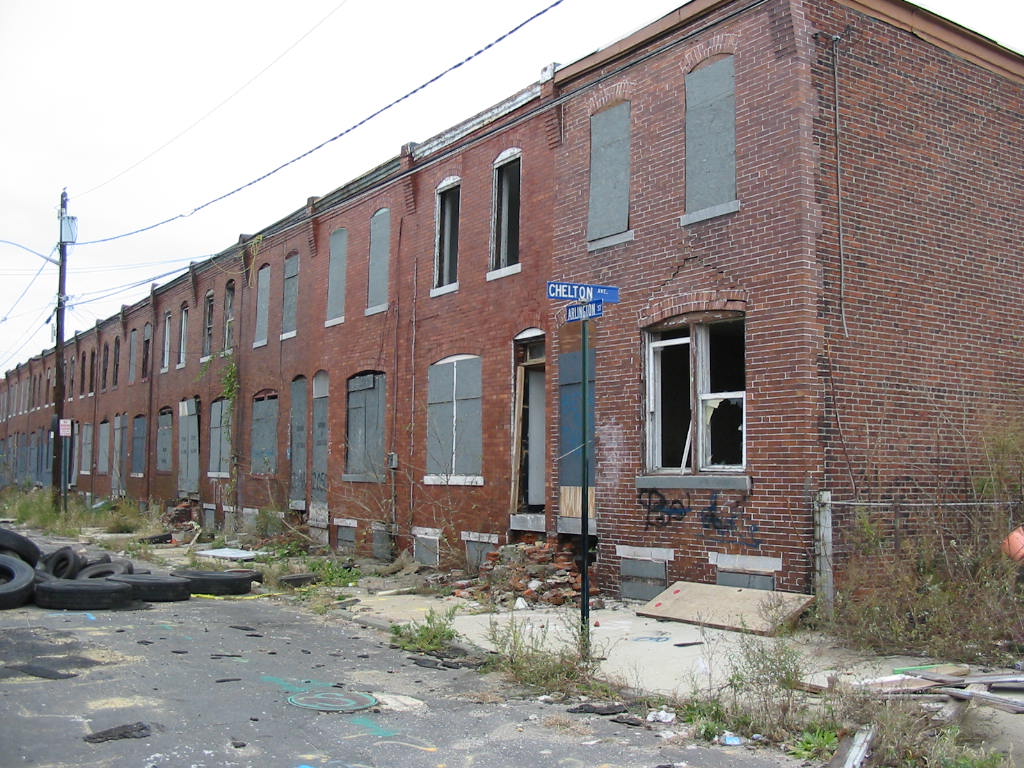 Camden, New Jersey sits directly across from the Delaware River from Philadelphia. Not as much a suburb of the larger city as a secondary hub, it rose to prominence as an industrial center and headquarters of RCA Victor, the New York Shipbuilding Corporation, and Campbell’s Soup; the latter retains its headquarters in the city. However, widespread relocation of the industry (beginning during the Depression), political corruption, and high crime helped the city’s population plunge from its peak of 125,000 to a current rate of about 80,000. The city remains a contender for the poorest big city in the country; recent US Census reports estimate that over 40% of the population is below the poverty line.

This single block in a neighborhood south of downtown near the riverfront may exemplify the devastating impact population loss can exert on a city. But population loss fails to account for something this profound. A number of cities have lost a third of their population since the dawn of suburbanization, but most of these places don’t look like Camden. What specifically contributed to Camden’s decline, or, more specifically, what happened in this specific neighborhood? I am going to try to shy away from being the armchair sociologist, and look at this more from the perspective of the principal demographic group that left the city. In short, I’m going to get into the head of a working class white resident of Camden from decades past. Here are my speculations on what took place over time, based empirically on what residents might have experienced in prior decades:

1) Obsolescence of housing stock. The attached rowhome is probably the most common typology for working class residences in the greater Philadelphia area, particularly in the old cities that directly abut the Delaware River. Unlike the neighboring northern city of New York, Philadelphia had a relatively high degree of homeownership among its laborers even prior to the GI Bill and rampant suburbanization in the late 1940s. The average “trinity” is three stories, about 900 square feet and originally designed to house family of between five and six. Fitting this many people into such a small home is inconceivable by today’s standards; even the Levittowns, one of which was built outside Philly in Bucks County, offered more space than this, with the added benefit of personal lawns and private walls. As old neighborhoods in north Philadelphia and Camden declined, the white working population left these rowhouses for slightly more spacious homes; even if they didn’t have the income to buy a fully detached house, at least they sought something bigger and with a patch of land or an alley for off-street parking in the back. Philadelphians of moderate incomes moved to former pasture lands in northeast Philadelphia; though they left a devastated North Philly in their wake, at least many of them remained in the city limits. Camden, at an extremely compact 10 square miles, had little or no vacant land, so the middle class flight involved an exodus from the city, depleting the area of its tax base and living scores of homes with no one to fill them. Neighborhoods such as Arlington Street pictured above were among the older, less desirable and the first to go. Conversely, some of the newer “suburban” areas of Camden, though still very urban by any observer’s standards, have newer homes with slightly more modern features; these neighborhoods are often largely abandoned as well, but not completely vacant.

2) Racial integration of school systems. Unsurprisingly, in a country with such a turbulent racial history, nearly all white flight is a response to a certain stimulus caused by a non-white “other”; in this case (as in most) a burgeoning African American population seeking factory jobs after departing the South in the Great Migration, then arriving to industrial centers such as Camden. Most likely Camden experienced de facto segregation in the earliest decades of its decline, in which school districts were drawn to along neighborhood boundaries that essentially preserved racial homogeneity: white schools and black schools. I feel it’s safe to make this assertion based on what I know about the Fairview neighborhood in far south Camden, which was, according to a person who grew up there, “still Mayberry” even into the 1970s when the rest of Camden had largely collapsed. Separated geographically from the rest of Camden by a limited access highway and a river, the Fairview neighborhood—which was a government sponsored “garden city” built to house workers after the First World War—remained almost completely white while the rest of the city was African American and Puerto Rican. However, in the 1980s, leaders built a bridge over the Newton Creek and changed school district lines again, thereby connecting Fairview to the rest of Camden and integrating the most critical institution people typically use to gauge neighborhood quality—the school system. In only a few years, white flight in Fairview was so profound that today the abandonment and decay in the neighborhood almost compares to the rest of the city. A further indicator of Camden’s hapless role as a tinderbox for regional racial hostilities is the fact that the surrounding communities generally remain majority white. While trendy Collingswood and tiny Woodlynne are relatively diverse, the town of Gloucester City to the South of Camden, is, by some locals’ estimates “what Camden used to be”, a town comprised of blue collar Caucasian laborers. What is striking about Gloucester City is that it is unusually homogeneous for a city within a state as diverse as New Jersey: over 97% white and over 40% of Irish ancestry, according to the 2000 Census. Any time a place of such homogeneity abuts a city as diverse as Camden, one can surmise that the residents have made every effort to prolong the segregation. Though civil rights laws of the 1960s prevent de jure segregation from existing today, zoning regulation or laws limiting rental housing often preserve de facto segregation, which might explain why Gloucester City has retained a population of white laborers—perhaps many of them former residents of the Fairview neighborhood.

3) Proliferation of the car allowed workers to commute to Camden. Though Camden suffered tremendous job loss after World War II, it hemorrhaged residents at an even faster rate. Campbell’s Soup retains its headquarters in the city, and because it is the seat of government for Camden County, Camden is a principal place of employment for many white collar government workers. However, nearly all of these workers living in affluent neighboring suburbs such as Pennsauken, Cherry Hill, Haddonfield, and Collingswood. The availability of the automobile to working class individuals meant that people with some financial means could escape the city just as easily as the wealthy had in earlier decades; the fact that the old housing stock in Camden does not accommodate vehicles with garages or driveways made the prospect of leaving the city in favor of newer housing that much more appealing. Today, only a handful of areas in Camden show any real sign of reinvestment: Rutgers University keeps a campus there, and the neighborhood surrounding it is in generally good maintenance. Beyond this, the waterfront of Camden has become the target for the vast majority of revitalization monies: among them are an aquarium, an outdoor concert venue, a minor league ballpark, and the USS New Jersey. While many of these attractions have been successful, they typically lure visitors from elsewhere in the region, who drive to their destination, park in a secure garage, and attend the event. Revitalization in Camden remains quite isolated to the waterfront, though city revenue has no doubt improved through taxes collected on these highly profitable entities. Nonetheless, Camden remains a scary place in the perception of most people in metro Philadelphia, and automobiles serve as a buffer from crime as one reaches city’s various destinations. Pedestrian traffic in downtown Camden beyond the impoverished local population is virtually unseen.

The result is what you see here at Arlington Street: a neighborhood that has achieved complete extinction. It is undoubtedly a harbinger of other Camden neighborhood’s futures, and most of the remaining housing stock is in such a state of disrepair that it is unlikely to lure urban pioneers for its vintage aesthetic. Camden represents one of the nation’s biggest urban revitalization challenges: so few neighborhoods remain intact that it is virtually impossible to sell the place. Anyone capable of leaving for a more prosperous community in the area (which is EVERY community) will most likely do so. Revitalization of some of the old RCA Victor factories into luxury condominiums is a nascent and potentially successful endeavor, but it remains to be seen if it will spill over beyond the well-monitored brick fortresses along the waterfront that comprise these unusual pockets of affluence in a sea of poverty. The best that can be done in many Camden neighborhoods is a complete reinvention, which apparently is what happened to the area in this picture, taken in 2003; mercifully, since this time, all the homes on this block have been demolished. However, this leaves Camden with its other monumental problem: acres of vacant land (often so contaminated from old factory pollutants that they have been designated Superfund sites) with no real demand for anything new. No doubt the fields along Arlington Street in Camden will lie fallow for many years before anything as radical as a home or a store will ever be built there.

PrevNon-variegated skylines.
“What street am I on?” says the pedestrian.Next

44 thoughts on “The exodus is complete.”