I recently had the chance to explore dying shopping centers in out-of-state locations that disprove the trends I observed at Lafayette Square and Washington Square Mall. In many regards, the retail decline at these two locations has advanced much further than the aforementioned two, and yet they remain open due to a resilient flicker of life in both.

The first, Summit Place Mall in Waterford Township, Michigan, benefits from several lengthy descriptions of its history on Deadmalls.com and Labelscar.com. The mall apparently originated in 1962 as a much smaller shopping plaza and then grew in phases over the years, until it began to decline in the late 1990s with the opening of Great Lakes Crossing nearby. I ran into no concerns with security during my visit to Summit Place in July of 2009. The inefficient, serpentine shape suggests the mall enjoyed abundance of space for developers to expand without any need for careful planning: even though it was devoid of crowds at the time of my visit, it still took me over ten minutes to get from one end to the other. In-line stores are over 95% vacant, and yet the winding corridors remain completely open. Mall management has, up to this point, made no effort to consolidate the remaining tenants to a specific location, so the few survivors are scattered. But the majority of the halls look more like this: 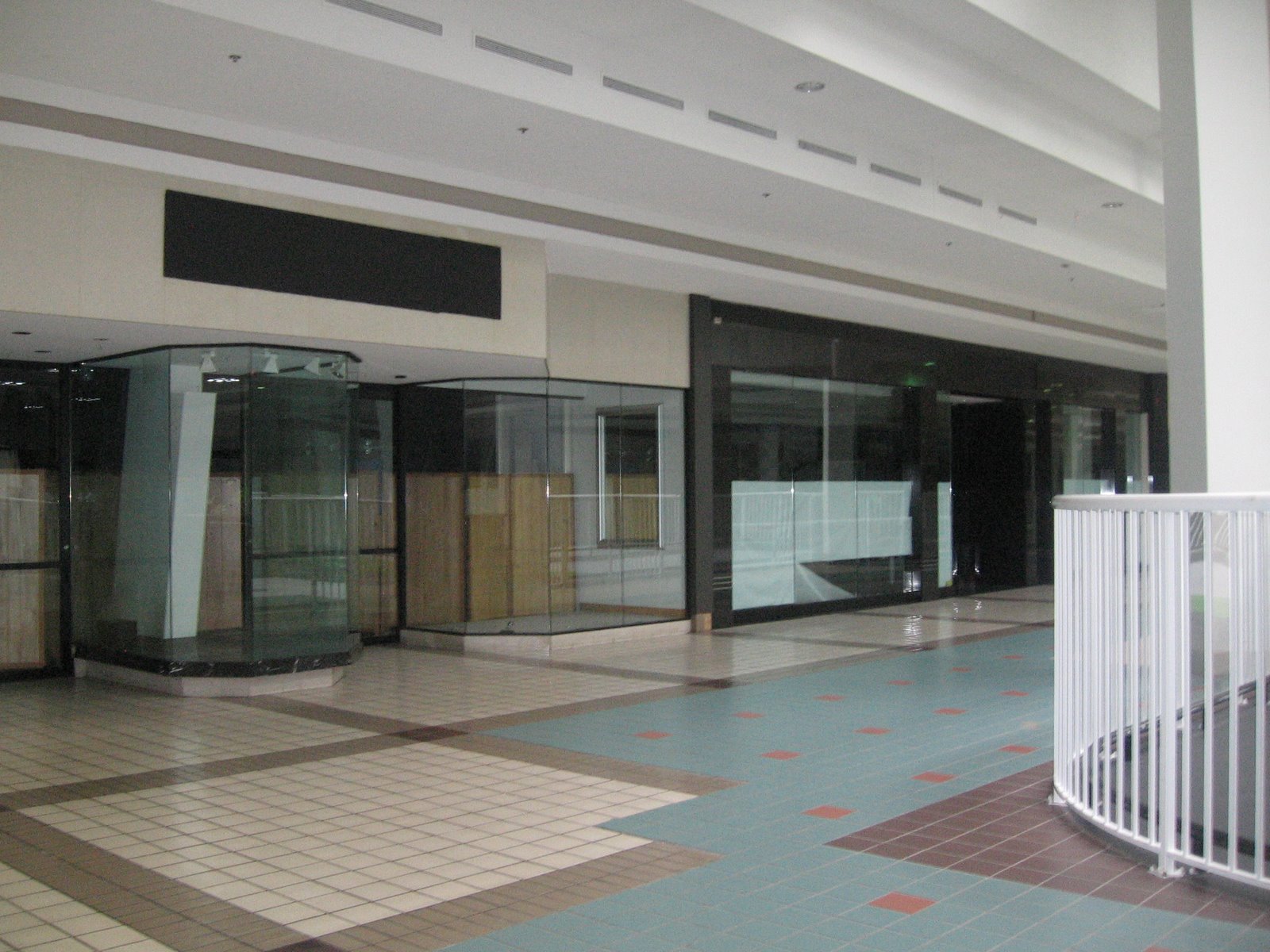 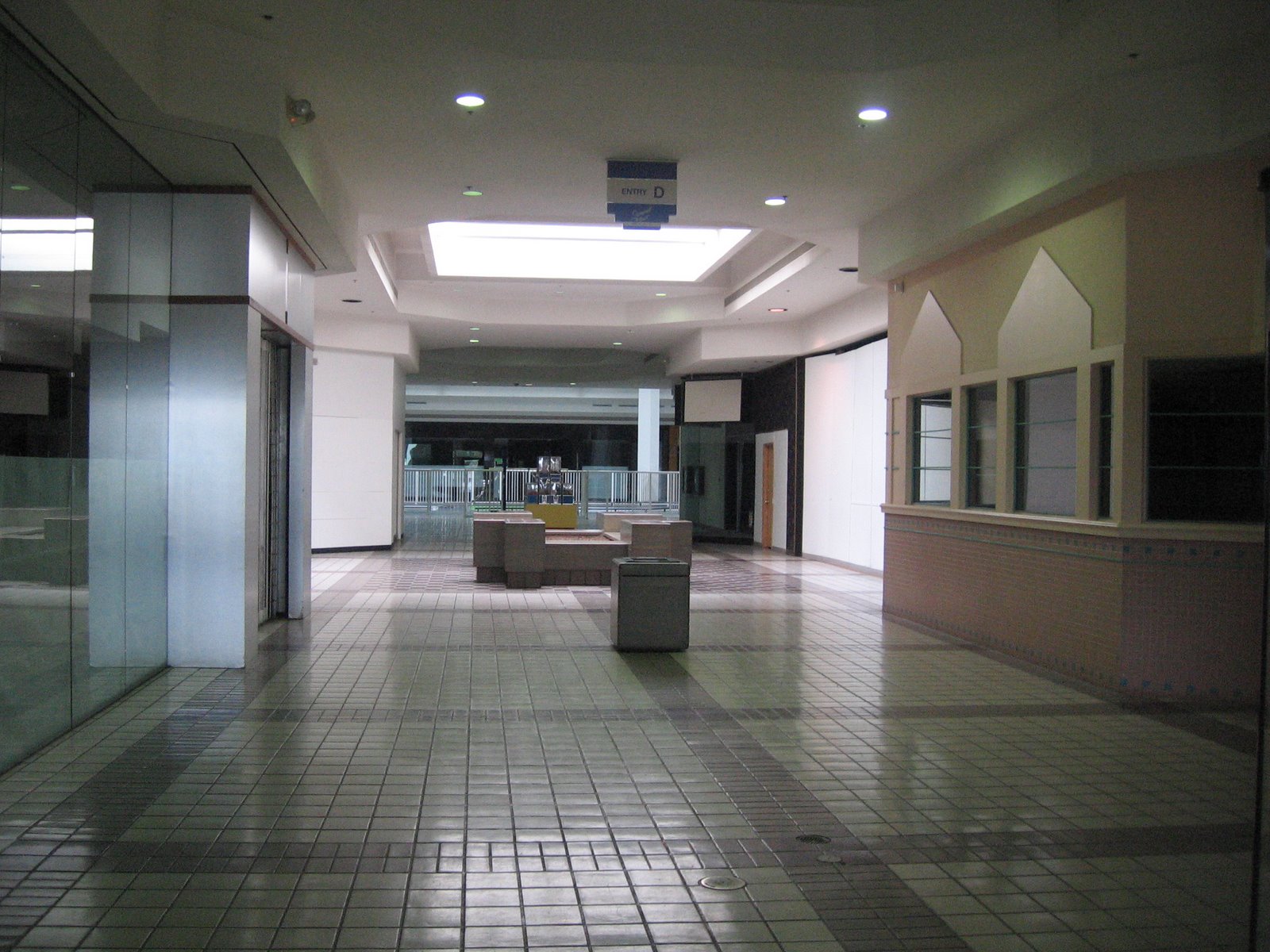 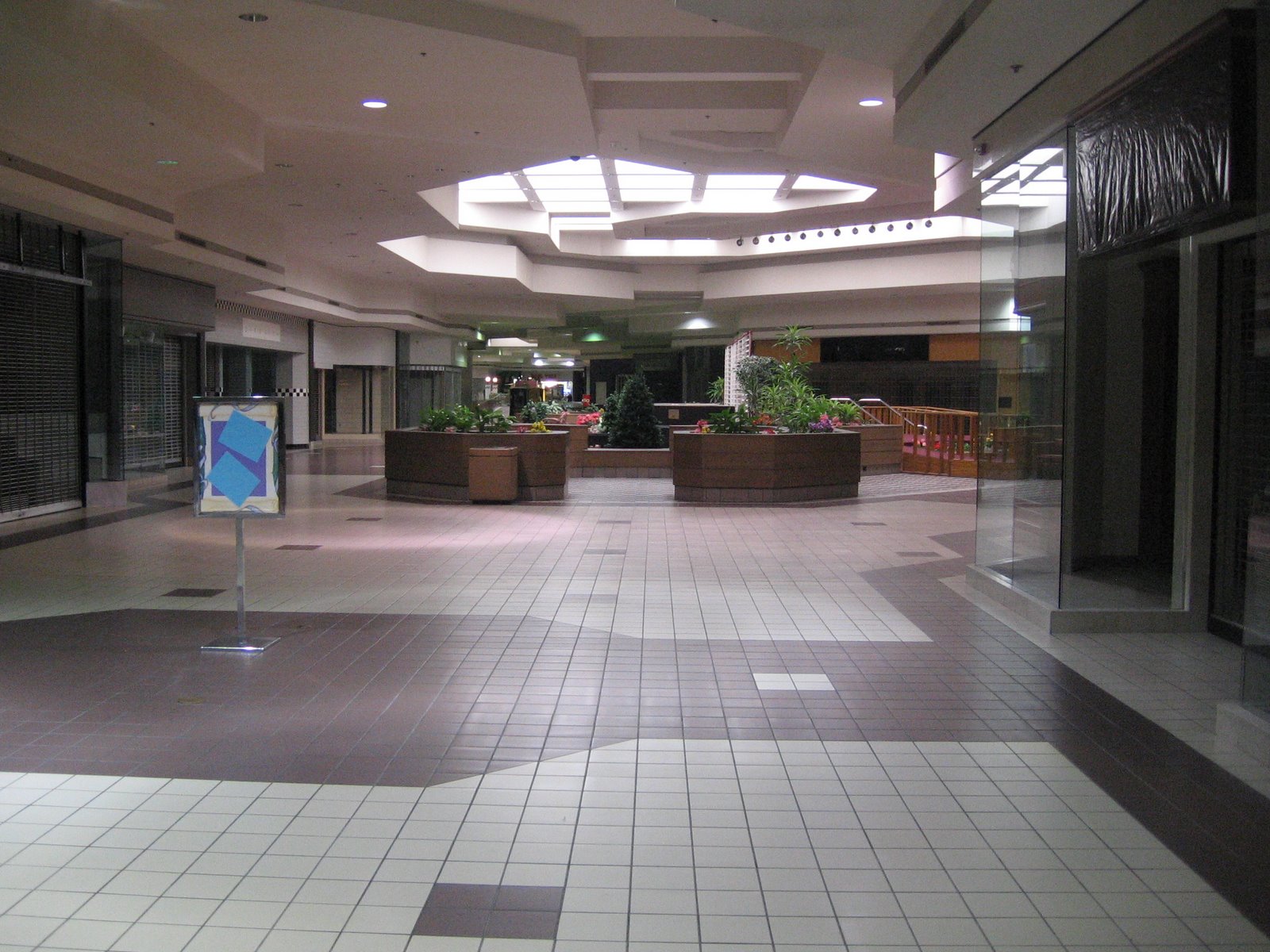 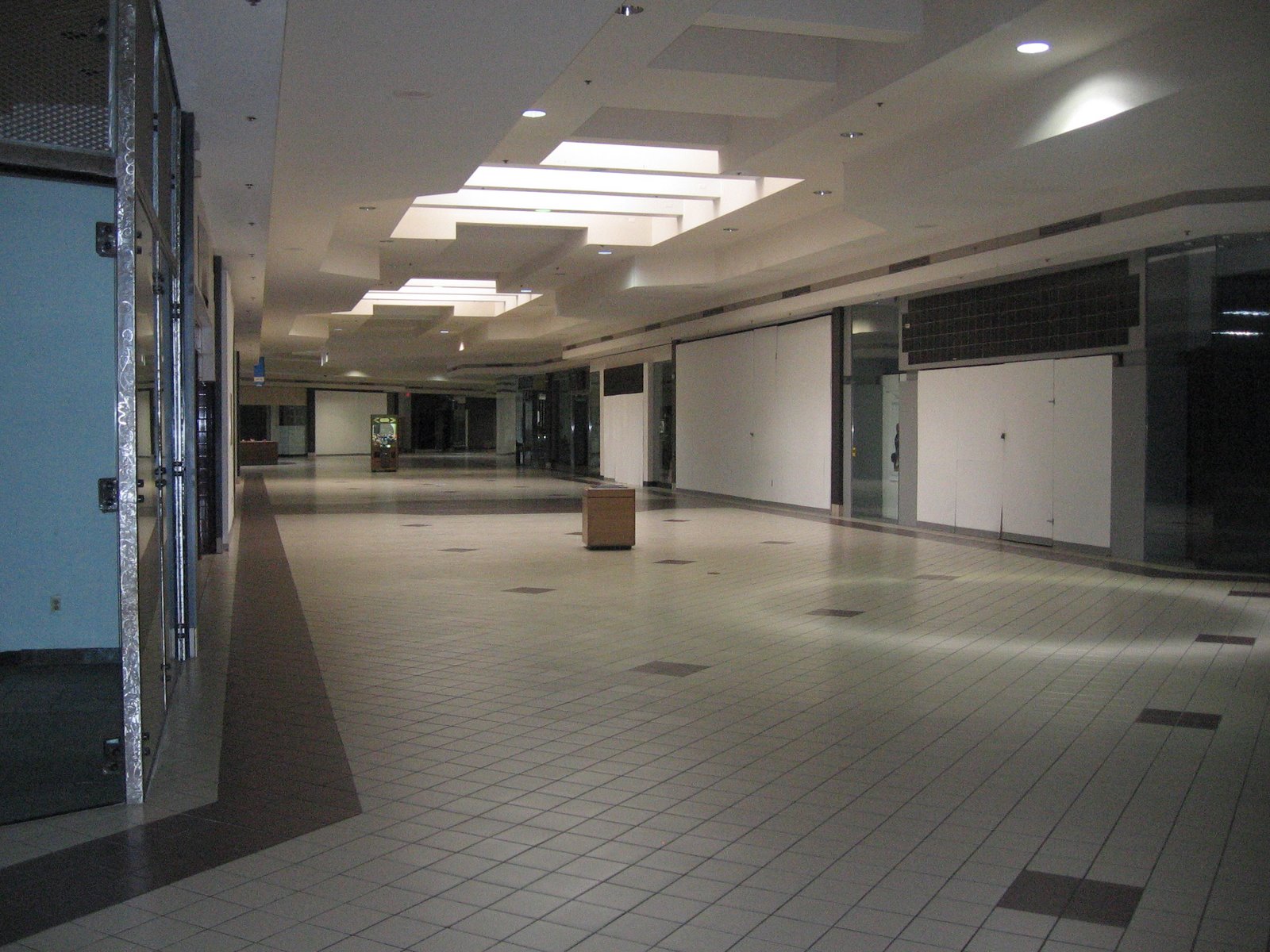 The few remaining open in-line stores that I saw contained a barber shop, an insurance agency, and a community theatre with an up-to-date schedule: 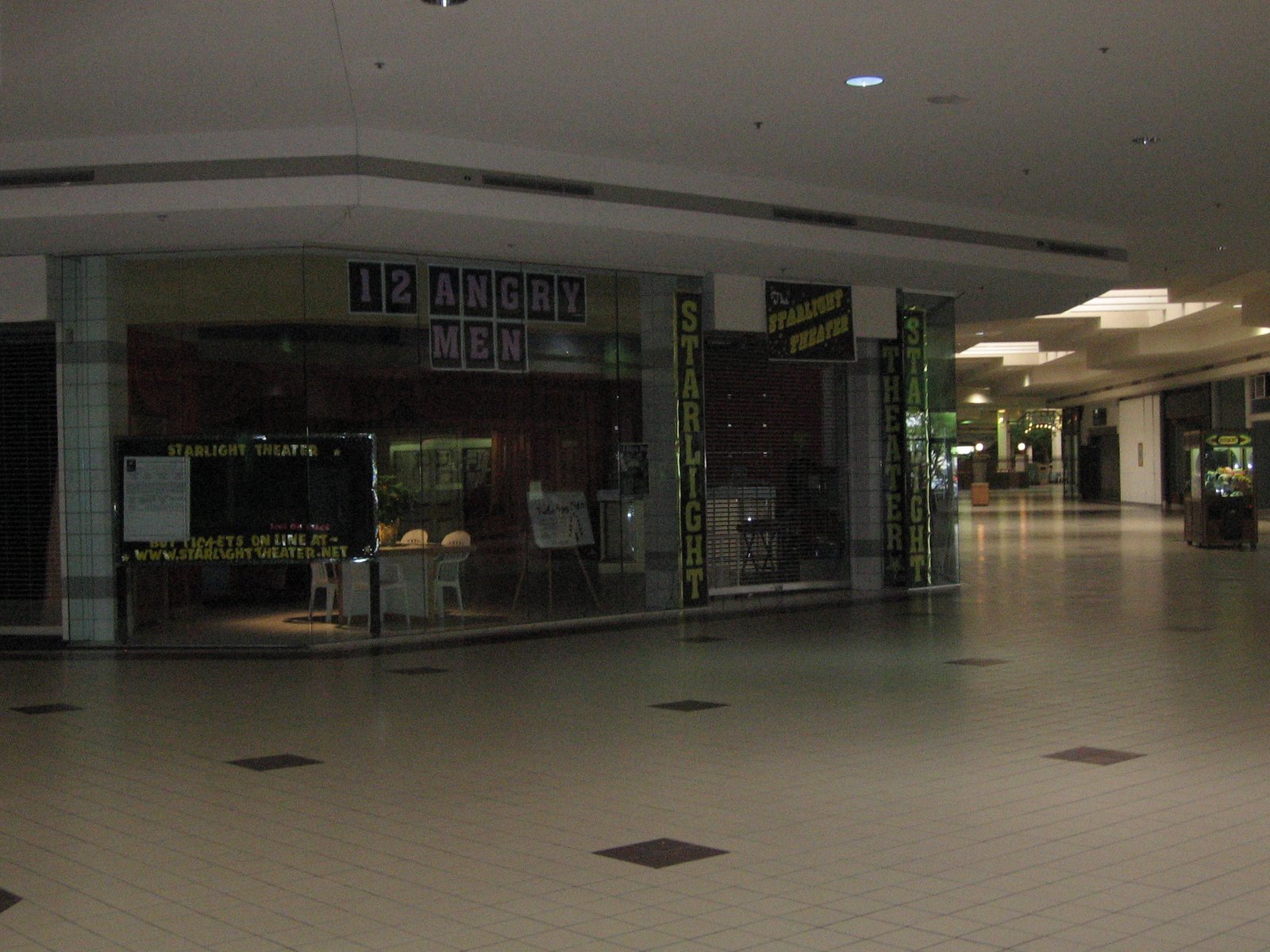 The only national retailers I saw were Kids Foot Locker and Deb, a discount fashion store targeting young women. What is remarkable about the Summit Place Mall—and what distinguishes it from the two struggling malls in Indianapolis—is that it still had, as of July 2009, three of its five anchor tenants: 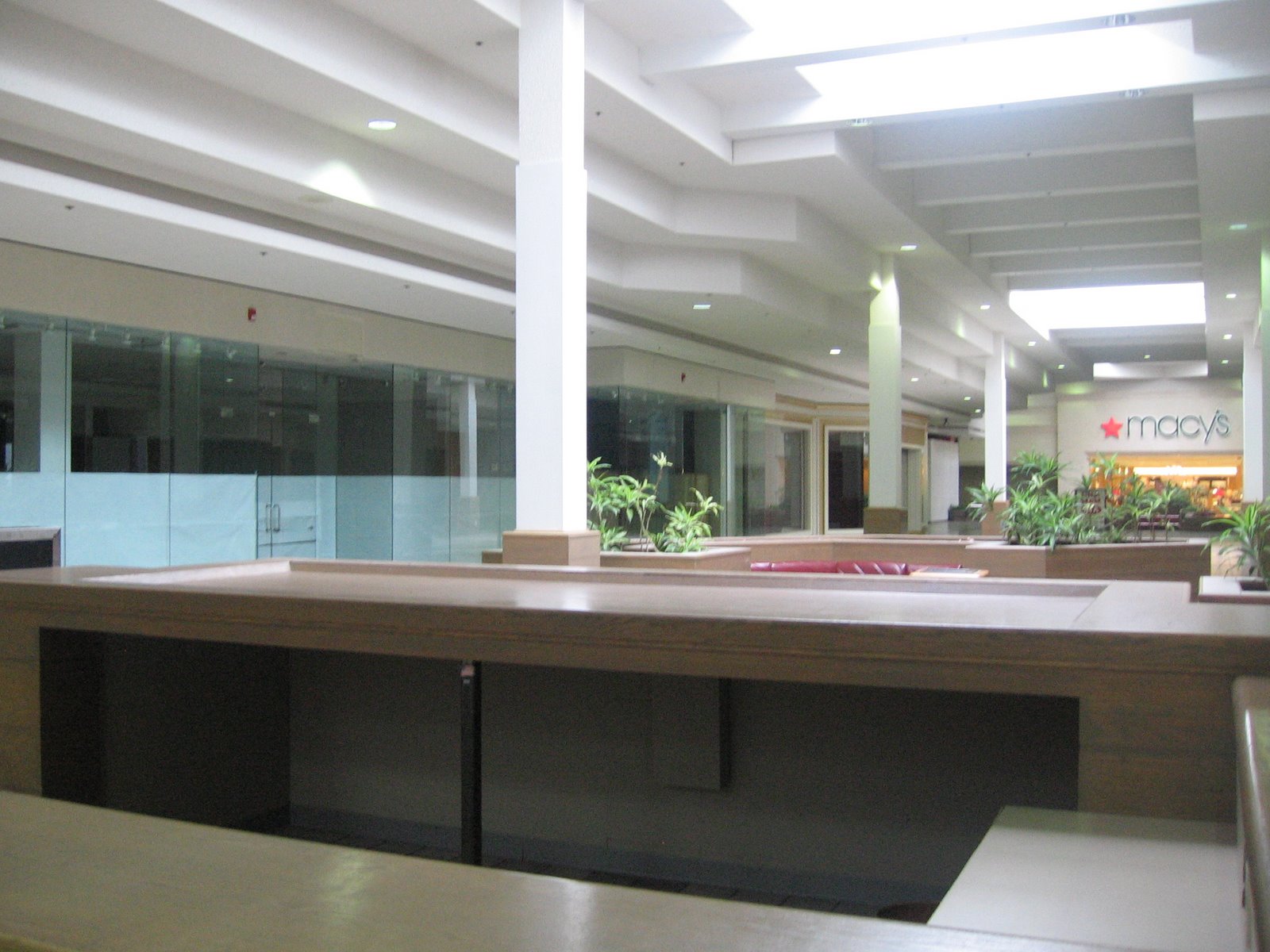 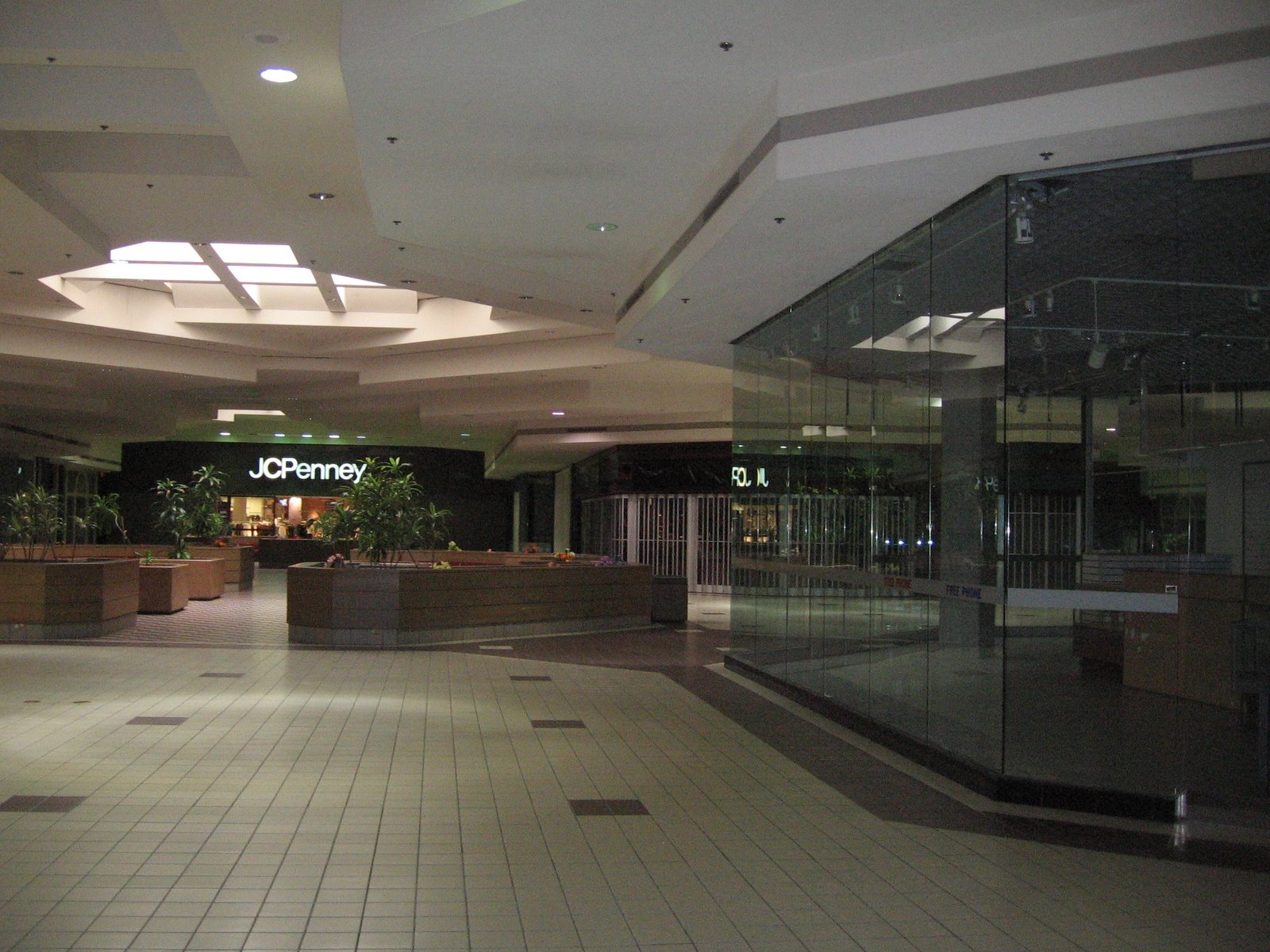 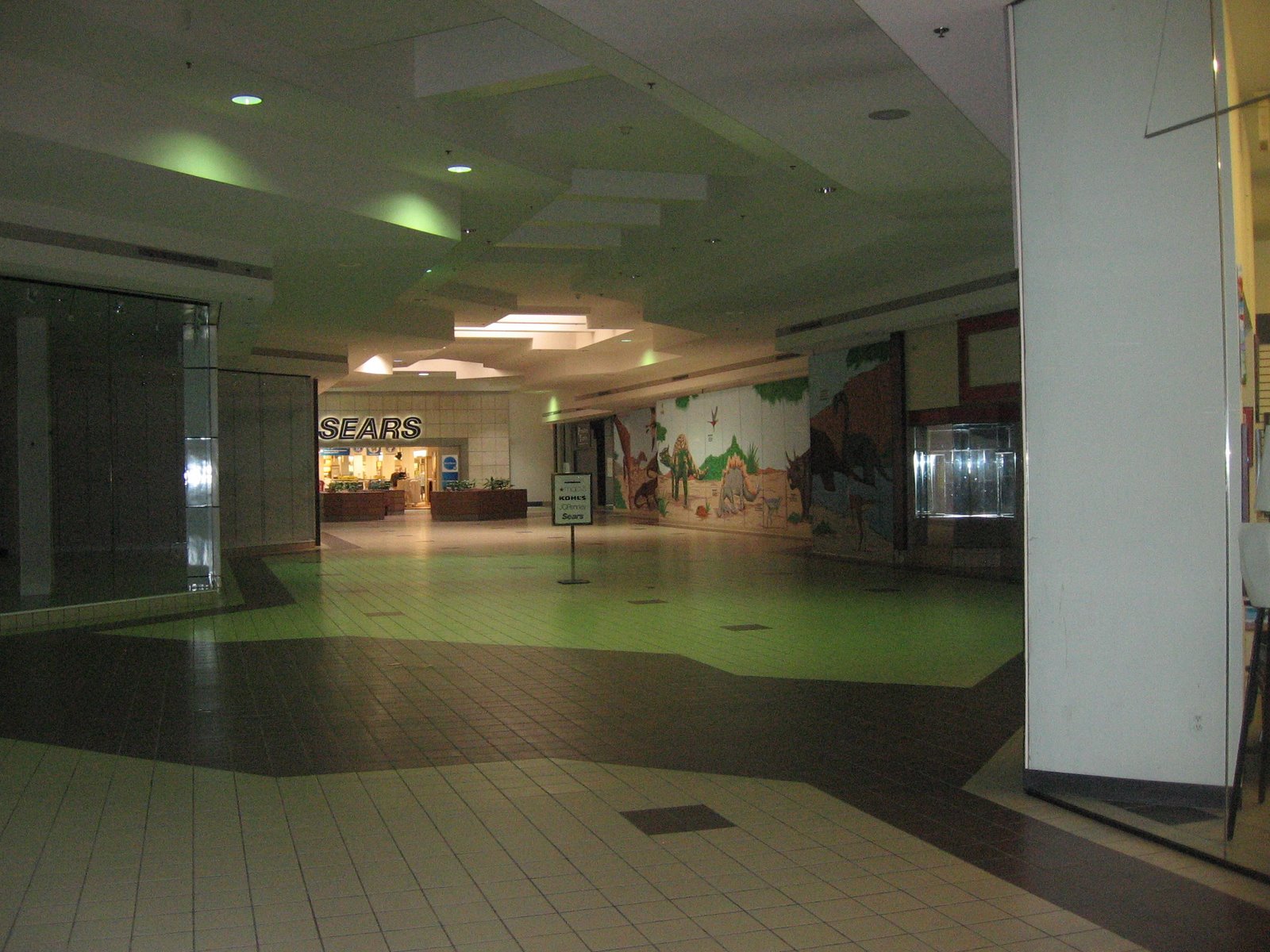 Despite the fact that the mall is almost completely empty, these department stores have remained. (Kohl’s apparently only left in the spring of this year.) These are not third-tier or second-tier tenants, either: Macy’s, J.C. Penney, and Sears are all conventional department stores that typically inhabit perfectly desirable malls in middle-class areas. All three have direct access to the exterior parking lot (which is almost always the case), and though I saw few cars on the day of my visit, sales volume at these three stores is ostensibly good enough for them to remain open amidst otherwise catastrophic retail failure. The physical condition of the mall still appears strong. For example, this courtyard, though surrounded by vacant stores, remains competently if cheaply furnished: 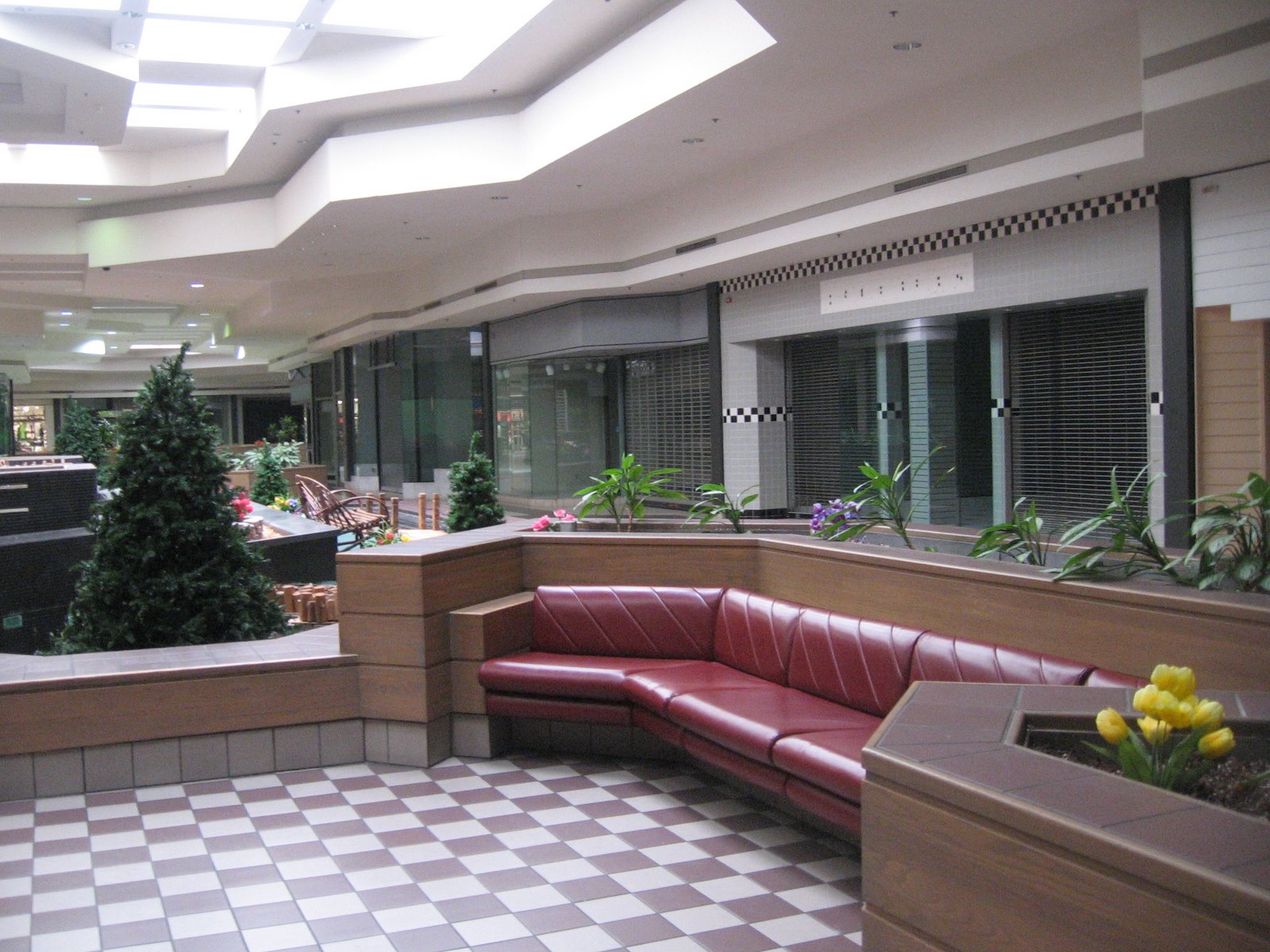 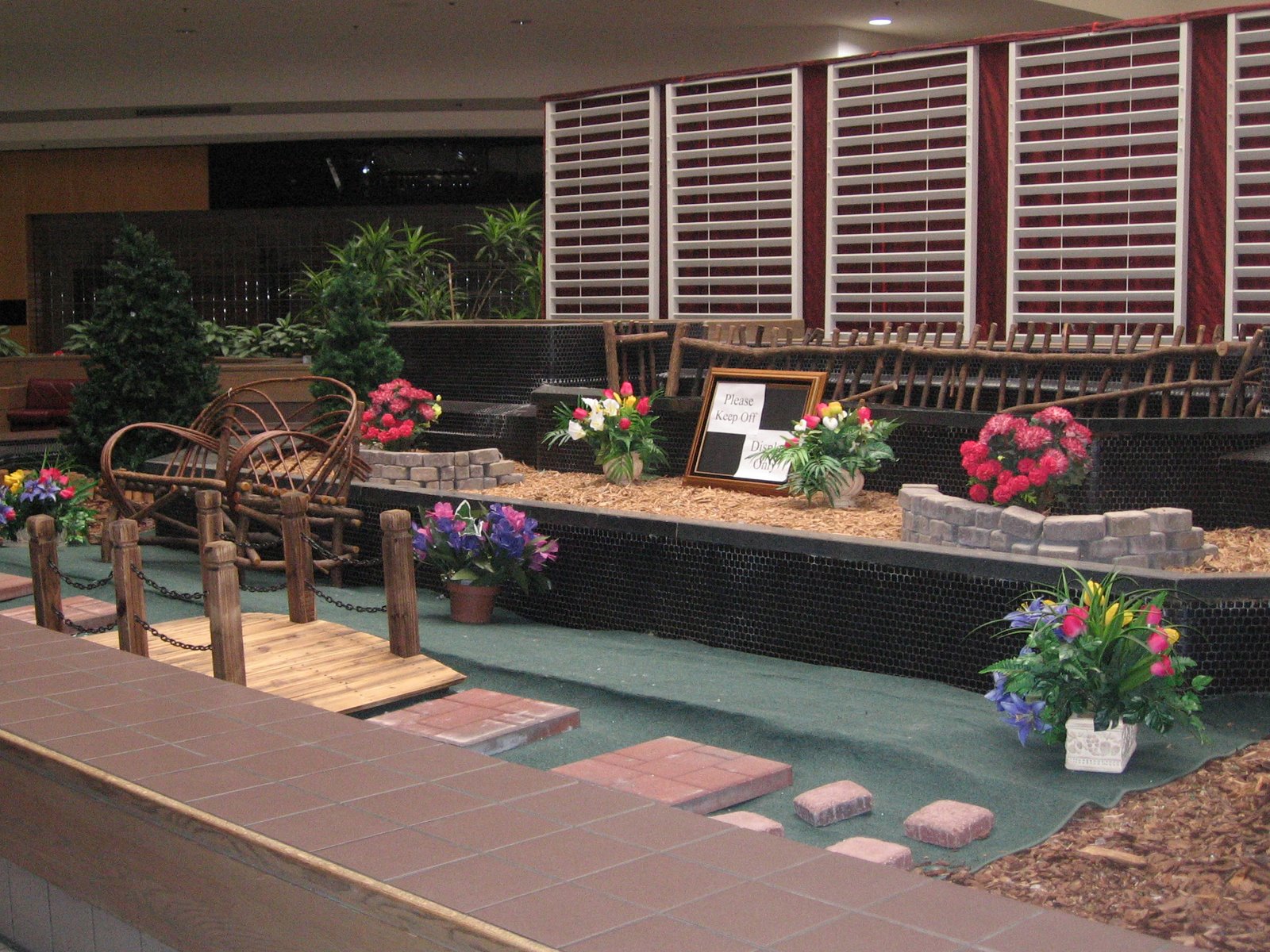 It puzzles me how management would be able to continue operating this mall without hemorrhaging money, but a closer scrutiny reveals signs of cost-cutting: lighting is minimal except around active stores, the parking lot is pockmarked with holes and worn cement, and the moribund, 90s-era food court provides the only evidence of a security officer who admitted to me she had nothing to do: 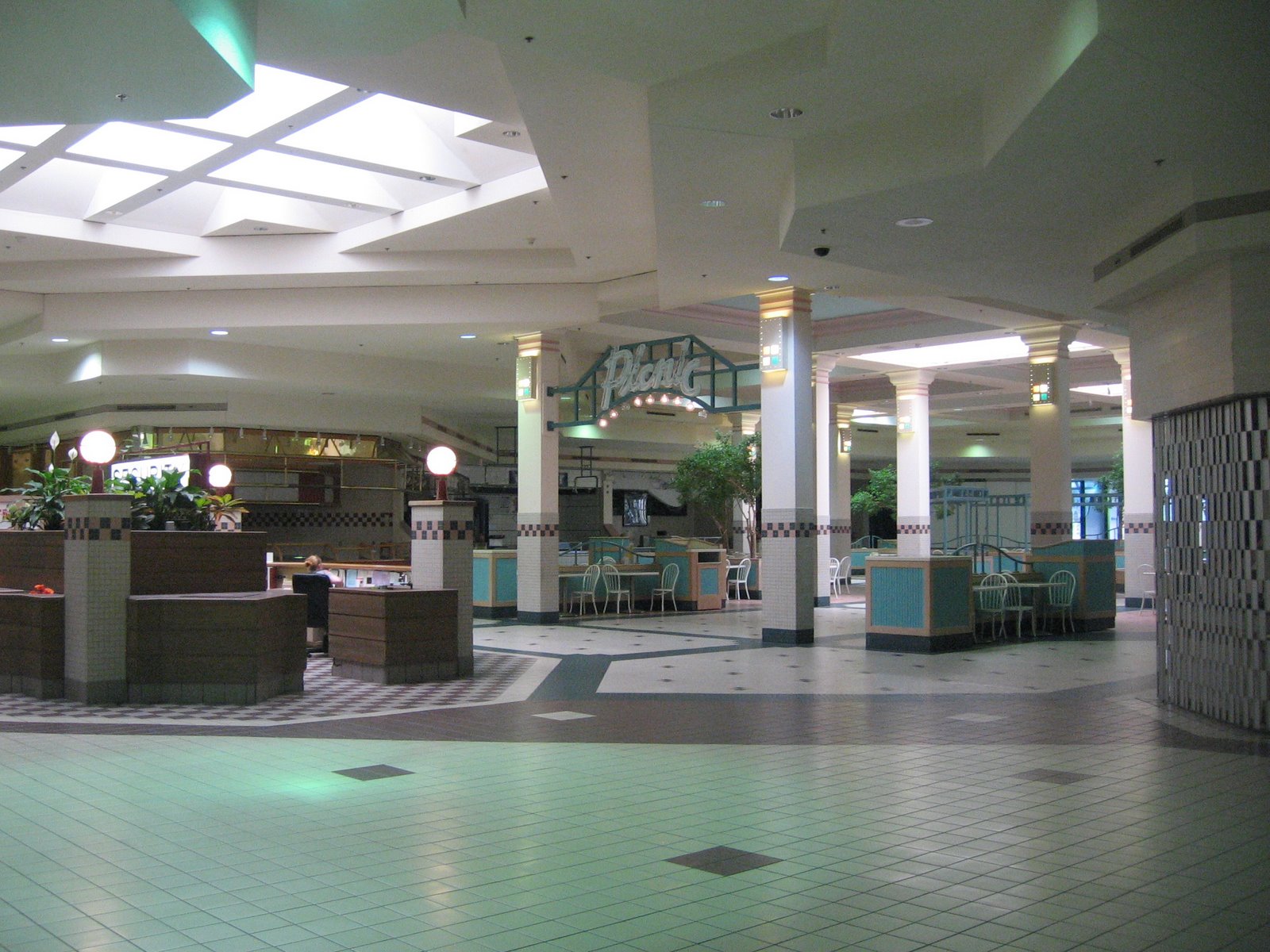 But since malls usually earn little or no revenue from anchor stores while depending on the rent from in-line stores, how—and why—is this mall able to stay in business even this long? Unlike Lafayette and Washington Square in Indianapolis, the transformation of Summit Place Mall is inevitable, and apparently NAMCO Capital Group, the mall’s current owners, have asked the remaining in-line tenants to move to stores with exterior entrances, while the non-profits are vacating completely to make way for a major tenant retailer.

Whether or not the proposals of the mall’s general management come into fruition, it appears that these three major department stores are committed to their location. What about the existing socioeconomics of the area would explain why these tenants are not relocating or closing up shop altogether? My guess is that the source of the anomaly is the location within the broader metro area of Detroit. Summit Place Mall rests north of America’s most consistently depressed major city, away from Detroit’s troubles in the wealthy suburbs of Oakland County. While Detroit continuously ranks among the poorest and most crime-ridden of major cities, the suburbs in Oakland County remain consistently prosperous. However, metro Detroit has struggled far worse than the average urban region during this prolonged recession, largely due to the automobile industry’s woes, but also because the city may have been coasting on a particularly misleading real estate bubble, at least partially induced by the artificially inflated wages of jobs at the Big Three auto companies that were surviving as unreasonably leveraged corporate entities for far too long. While Detroit has scarcely enjoyed the prosperity of a peer city such as Chicago, for many years the home values were comparable; the most recent downsizing of the auto industry elicited an unpleasant recalibration of real estate to meet actual demand, and prices plummeted. Oakland County can coast on its comparative wealth, but Summit Place Mall, in affluent Waterford, also abuts the city of Pontiac (the municipal boundary is directly across the street on the east side of Telegraph Road). Pontiac is perhaps the oldest, most industrial, and most economically depressed town in an otherwise stable part of the metro area. Concurrently, Oakland County radiates a misleading prosperity because it is the wealthiest portion of a region that is continuing to implode, shrinking in population as job losses continue unabated.

My suspicion is that the radical, almost violent juxtaposition of wealth and deprivation culminates in a place like Summit Place Mall, where mall traffic and sales volume estimates don’t allow any reasonable conclusions that coincide with national retail study models. Therefore, these department stores perform deceptively well in an area which the retail otherwise shows every indication of being in steep decline. In short, the current life cycle of Summit Place Mall can be explained accordingly: metro Detroit is shrinking in population. If metro Detroit were growing, no doubt an enterprising developer riding the wave of easy credit would have built a new shopping plaza prior to the bust of 2007. This didn’t happen in Detroit because it’s been hurting for while, and these three anchors—Sears, Penney’s, and Macy’s—aren’t leaving Summit Place, which is close to both rich and poor areas, because there are no new locations for them to move to. Thus, they remain. Whether or not they survive another year at the mall—especially if it fails to redevelop in a major way—will largely determine whether my hypothesis is correct.

I have even less of an idea of what to make of L’Enfant Plaza in Washington, DC. An anchorless underground mall at the L’Enfant Plaza stop on the DC Metro subway system, its gold-plated interior suggests a period of prosperity far older than that of Summit Place Mall: 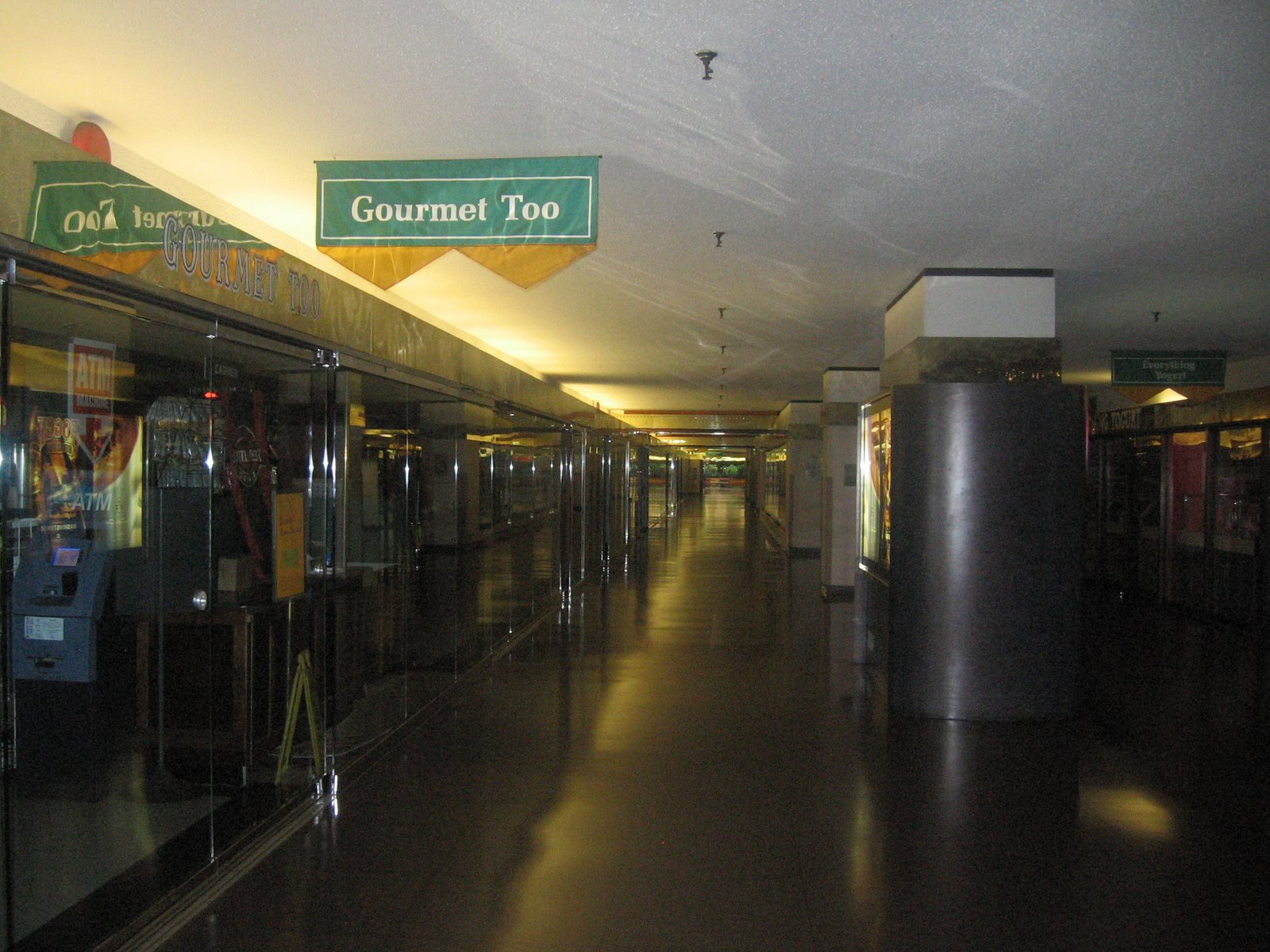 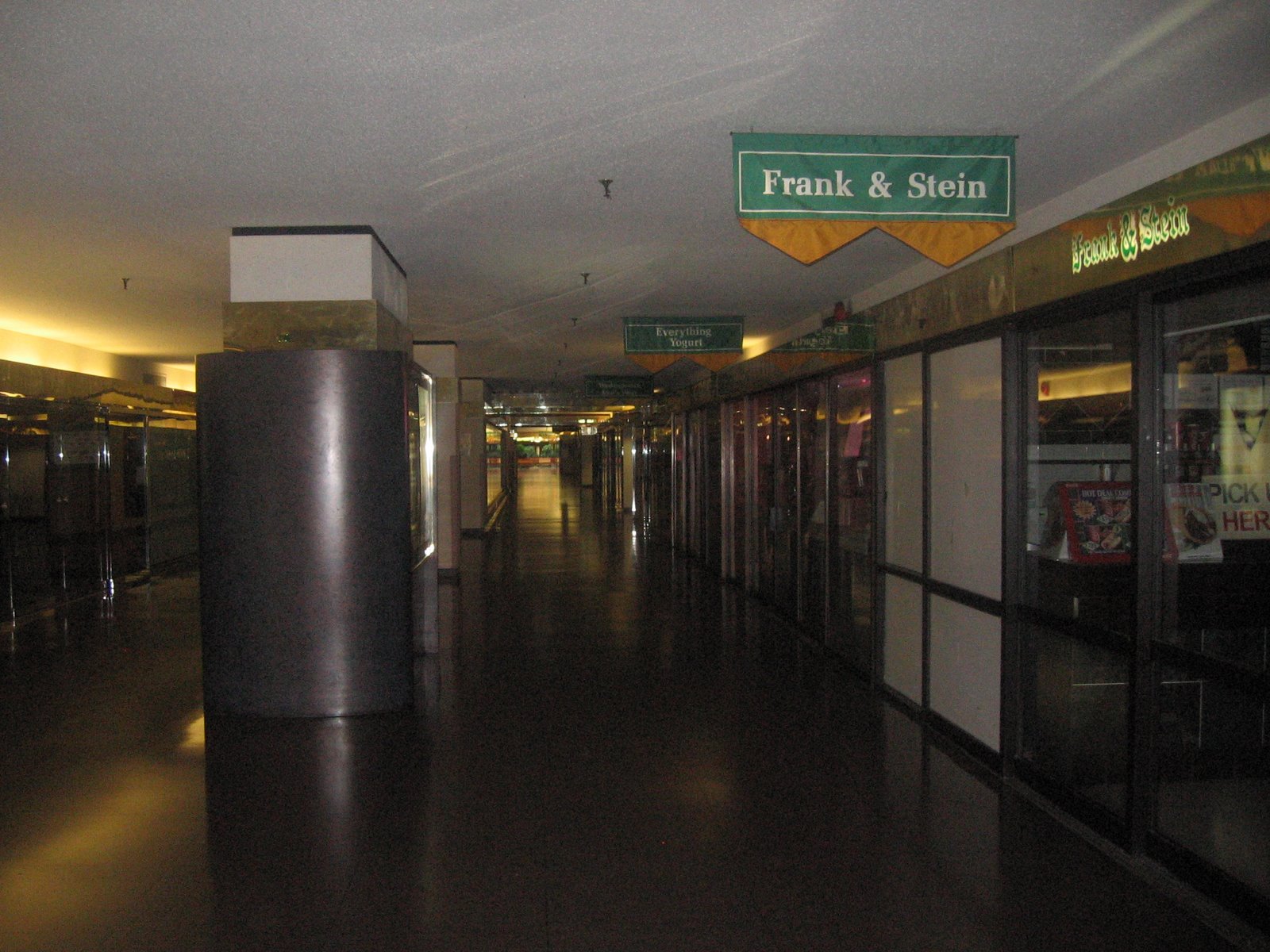 My visit may not fairly convey the real nature of this lifeless retail space, because the few visibly occupied shops were closed on the Sunday evening I was passing through. The preponderance of lunch places (the only notable chain is Au Bon Pain) suggests that the shopping place appeals to the lunchtime business crowd in the area only, a space flanked by such major federal government branches as Housing and Urban Development and the Department of Education. The density of office workers traveling through the area each day is formidable. More importantly, L’Enfant Plaza rests atop the convergence of four of the five principal subway lines running through Washington. Considering these factors, shouldn’t the plaza benefit from heavy pedestrian traffic that would transform these storefronts into prime retail space?

Clearly this is not the case, making this another deviation from the rules of good retail: location, location, location. By all estimates the location here should be terrific, but apparently most workers or subway commuters find alternatives when it comes to lunchtime shopping. It could be that the proximity of the Metro station almost makes it too easy to find shinier shopping plazas nearby; any similar shopping center in the Golden Triangle (the heart of DC’s central business district) offers a more eclectic variety in a setting that has been updated to meet contemporary standards of attractive retail. Daytime workers could hop on the subway and be at a much better location for shopping in just a few minutes. Thus, the problem at L’Enfant may derive from poor urban design choices in the 1970s era in which most of it seems to have been constructed: the area around L’Enfant Plaza is no more inviting at the street level than it is underground. The massing of these large institutional structures in southwest DC do not easily accommodate a recreational, white collar shopping/eating experience, since the roads are wide, distances between buildings are great, and a typical streetscape offers a monotony of office windows rather than expansive, retail-oriented fenestration. A facelift may be all it takes to revitalize L’Enfant Plaza as a shopping or lunchtime destination, but I suspect it would achieve little, because the built environment above these underground retail halls fails to harmonize with any of the flurry of activity that occurs below.

Summit Place and L’Enfant Plaza may challenge from the standards of mall decline put forth in earlier blog entries, but they reinforce the notion that retail is highly sensitive to seemingly infinitesimal shifts in people, structures, and the way the two engage with one another. Both spaces are screaming for redevelopment, but unless the person/place dichotomy shows the right level of calibration (or finds the right designer who can work to make them harmonize), they will continue to flounder in retail limbo.