“Please do not park here again.”

With this pioneering blog post I’m going to feature a photograph taken by someone else. Though I haven’t been to this exact location, I have visited the city and I think many of us have witnessed this sort of predicament at some point. The photo was taken by Krzysztof Hanusiak in Park Ridge, Illinois, a suburb of Chicago. 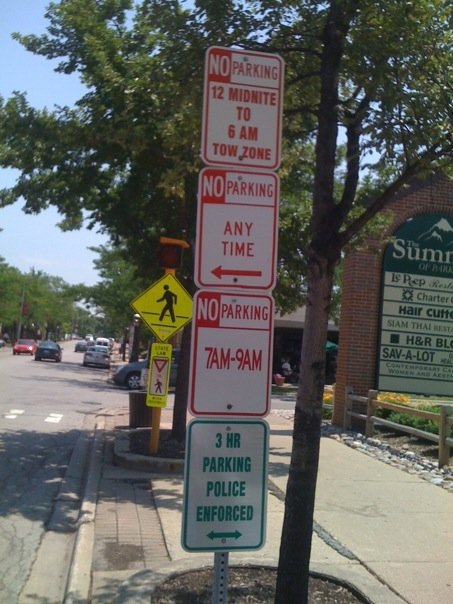 Trying to decipher it is akin to solving one of the logic questions one might see on a standardized test. I have blogged before on the artistry of on-street parking management in specific urban locations , and signage such as this suggests to me the accrual of multiple regulations applied over time. Here are my speculations:

Clearly I could speculate on this until I’m blue in the face. Chances are these restrictions existed as separate legislative acts, applied methodically where the street and building conditions suited their respective restrictions. The reason behind the restrictions doesn’t really matter; what’s interesting is how they all come together at this precise location, like the fusion of multiple circles in a Venn diagram. The only problem is they don’t come together at all.

So who can park here? This much signage in aggregate has the effect of discouraging on-street parking altogether—not something you want to do in a suburb that generally favors the automobile but still accommodates the pedestrian better than the newer suburbs farther away from the city of Chicago. While the density is nowhere near as high as that of Chicago as a whole, the city represents a generally fluid transition in neighborhood vernacular from the comparatively middle class, white neighborhoods of northwest Chicago that abut Park Ridge to the south, such as Edison Park. While the homes in Park Ridge are somewhat newer and more opulent than in EdisonPark, the transition between the two otherwise is seamless, with broad streets to accommodate on-street parking, moderate density (four to eight homes per acre), and a thoroughly developed network of sidewalks. The separation of uses afforded by Euclidean zoning is certainly greater here than older neighborhoods of Chicago where residential and commercial routinely occupy the same space; however, uses in Park Ridge are not so sequestered to prevent residents from walking brief distance to minor commercial options within a mile of their homes.

Thus, in some ways, Park Ridge found—perhaps quite unintentionally—a balance between cars and people suitable for a bedroom community. Most people will drive to get around, but, unlike outer suburbs such as Inverness or most of Schaumburg, that residents aren’t resigned to their cars if walking suits them. The presence of large, sprawling, off-street parking lots in Park Ridge is restrained enough to keep building density comparatively high. The availability of on-street parking, manifested by what this sign both allows and forbids, could easily offer a tipping point for such a suburb: destroying the culture of on-street parking would hardly turn people away from their cars to seek shopping by foot; instead, they would simply seek off-street parking and commercial areas that more readily allow parking without confusion or threat of a ticket. Park Ridge has a pedestrian friendly downtown and several retail clusters (such as the one in the picture) that still facilitate walking from one shop to another. It would be a shame if excessive regulation turned people off so that they sought strip malls elsewhere simply to avoid the hassle of making sense of these ridiculous street signs.

At this point it might seem easy to ask, “You get all of this from a single photograph?” It probably is a stretch on my part, but I am convinced that town planners should watch the effectiveness of on-street parking like a hawk, because general availability and cost can exert a profound influence on pedestrian counts, which in turn influences the type of retail that locates nearby, or whether retail chooses to locate there at all. In this case, the City of Park Ridge just slathered on the restrictions, and they all came to a head at this ridiculous spot. I wish the retail tenants—and their shoppers—the best. Caveat emptor.

Prev“What street am I on?” says the pedestrian.
Window washing.Next

2 thoughts on ““Please do not park here again.””