Pedestrian hatred rears its ugly head in the humblest of ways.

One of my readers pointed out that I made some inaccurate observations in the post listed below, in which I used a picture provided by another blogger but failed to identify some of the details correctly. Specifically, the sign below refers to a surface lot and not a garage, and it is blocking a bicycle lane and not a pedestrian one. While they don’t significantly alter the spirit of the analysis, I want the essay to reflect accurately the content of the photograph, so I am re-posting to account for this.

In meeting my goal of using other people’s photos for occasional blog posts, I submit this recent pic from John, a local blogger and contributor, who made this observation of the Indianapolis Cultural Trail earlier in August, looking southward down Alabama Street: 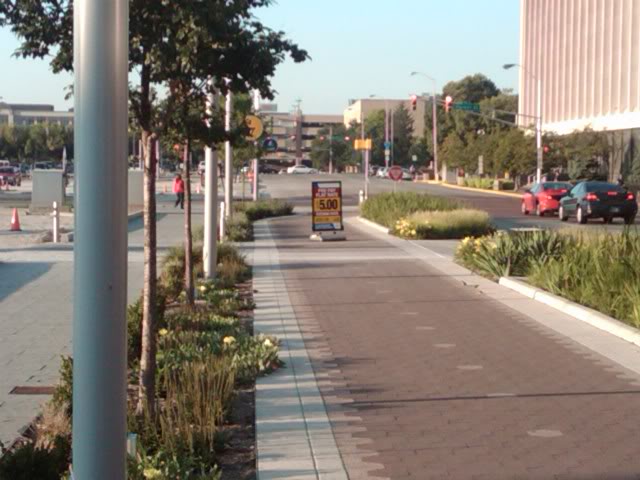 The metal sign advertising rates at an adjacent lot is blocking a portion of the bikeway. The trail, one of the most innovative pedestrian improvement projects in the country—let alone in Indy—clearly doesn’t rate highly among the owners of the surface parking lot, which, sadly, happens to be the City of Indianapolis. Not only does the car trump the bicyclist yet again, but even signage accommodating the car and promoting the parking lot takes precedence.

My use of the word “hatred” in the subject here is clearly hyperbole, and this was probably an isolated incident reflecting one city parking services employee. It’s unfair to assert that this episode reflects the overall status of bicyclists or pedestrians in urban settings, but it does demonstrate profound negligence on the part of city employees. Unfortunately, public servants with far greater decision making power have made similarly poor judgments in regards to the pedestrian environment; the results are often far more permanent. This link on SkyscraperCity shows the catastrophic results when two other city agencies (most likely Public Works and Utilities) fail to correspond their plans with one another. The area is impassable for someone in a wheelchair. (Conversely, the parking debacle in Park Ridge that I blogged about earlier suggests a single department failing to see that its regulatory plans correspond internally.)

After seeing this photo, someone else essentially remarked that such a metal sign would not survive fifteen minutes if it were blocking the vehicular right-of-way. Most walkers, of course, can maneuver around this without infringing upon another person’s safety or personal space, while a car could pose an extreme hazard by swerving to avoid this. The less solicitous drivers would no doubt simply ding it off the front bumper. Bicyclists fall somewhere in between, in that they could probably avoid this particular obstacle but may endanger themselves or another cyclist in the process. Both bicyclists and pedestrians have developed a tacit reputation of extreme adaptability: witness the “goat trails” of worn grass at the verges of some roads that have no sidewalks but clearly get used frequently by walkers (or mountain bikes). Most will find a means of getting around by foot or two wheels regardless of the meager infrastructural support. This in itself may have far more to do with the reason so many urban roadways remain auto-oriented–cars are among the most demanding means of transportation, generally requiring specific surfaces, gradients, and traffic management devices to operate safely and efficiently. Even in urban areas where the population density and environment come closest to supporting bicycling and pedestrian infrastructure with little intervention, one often witnesses road repairs while sidewalks continue to crumble–if they exist at all.

This is hardly a profound observation, but it can manifest itself in banal and thankfully ephemeral ways. A few days later, John, our fearless photographer, revisited this site and another area where the Cultural Trail was partially blocked by a scissor lift, and both barriers–the scissor lift and this metal sign–had been removed.

PrevCheapened by the nosebleed view?
Maybe Memphians are on to something the rest of us don’t know.Next