When I first visited Houston, it took me several hours to decide what seemed so strange when I was observing the skyline while coasting along I-10. Many people have remarked on the acentric nature of the metropolis, how a cluster of skyscrapers at what seems to be the downtown immediately devolve in importance from the presence of another neighboring cluster of skyscrapers, while a third or even fourth ostensible “downtown” looms in the horizon. This is all true, but even the biggest aggregation of tall buildings—the real, original downtown of Houston—seems funny looking on its own terms.

Many websites—SkyscraperCity among the most popular—dissect urban skylines’ density and breadth, generally serving as a platform for a detailed discussion of urban concerns. Houston’s skyline seen here from City Data has a moderate degree of multi-dimensionality and thickness to be expected for a city of its size in which the major edifices stand on a variety of streets. (Compare this with New Orleans’ skyline, which seems quite impressive for its breadth from certain angles such as this one from Travelblog but has very little density, because a preponderance of the skyscrapers rest on Poydras Street.)

My own photos, taken from about the twentieth floor of a hotel, try to capture what still seems to be missing this portion of downtown Houston. 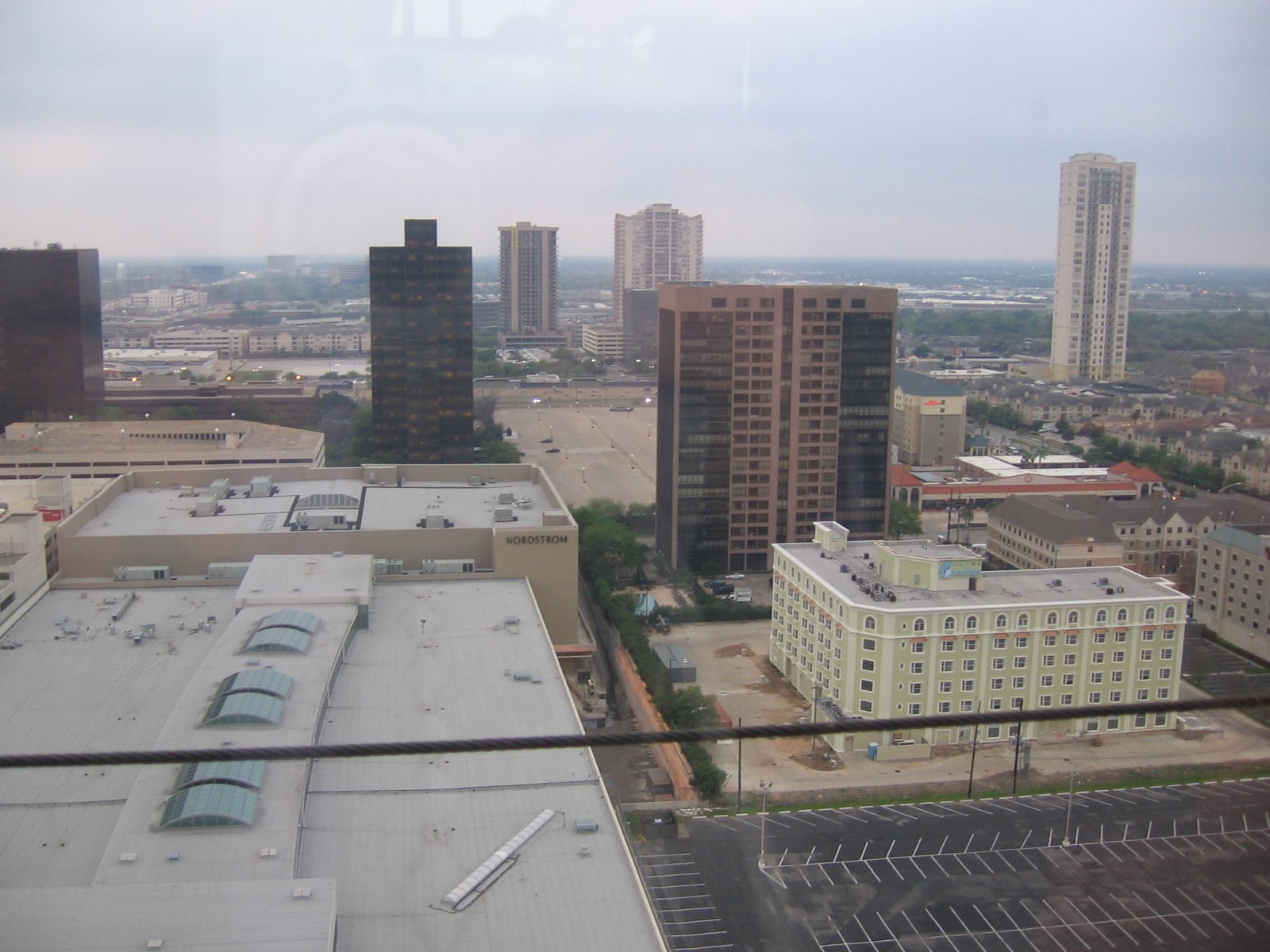 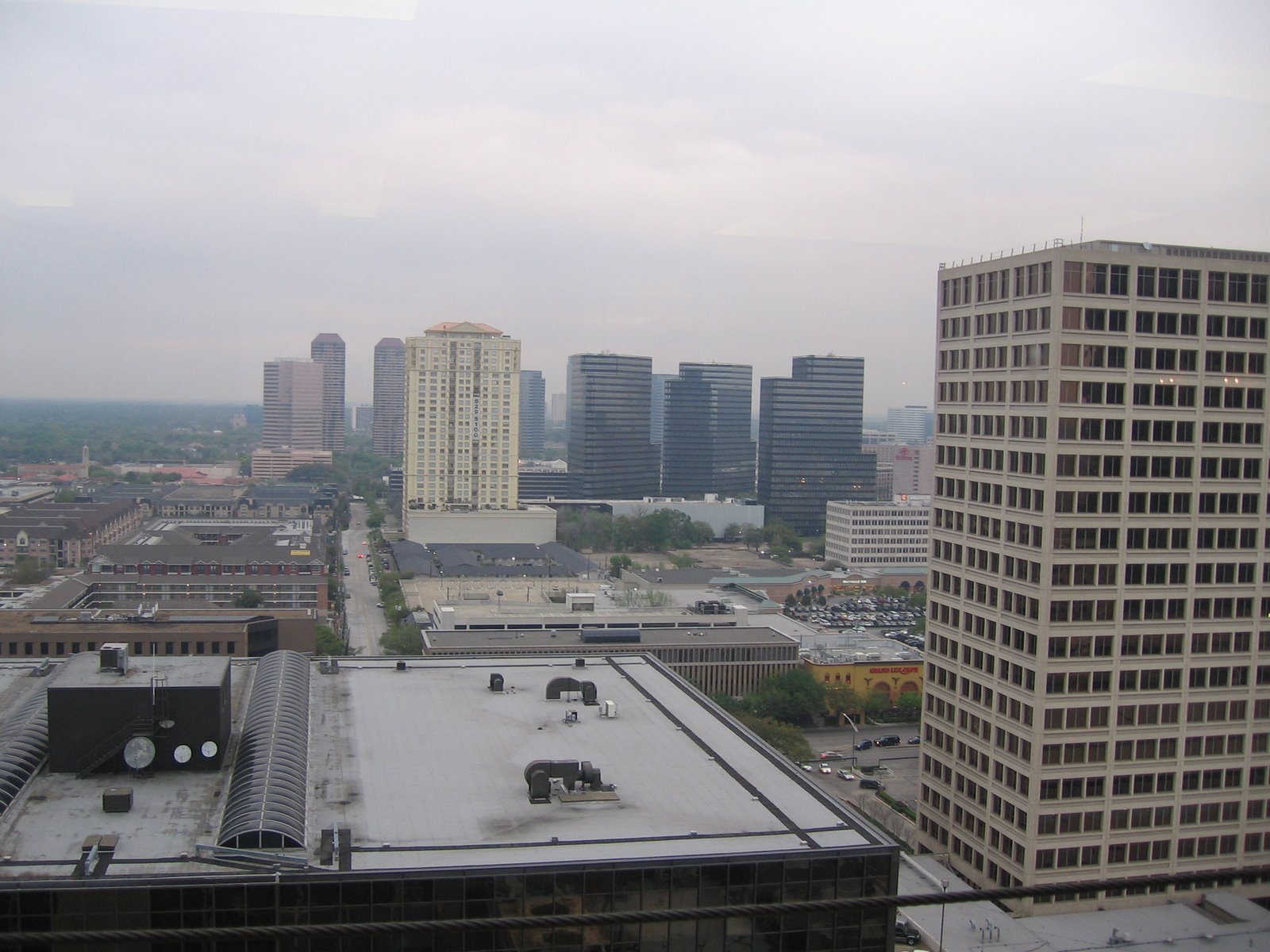 For those of us who grew up in old northern cities (or at least older cities like Indianapolis), Houston’s skyline stands out for the glut of structures dating from the 1970s to the present: glassy cladding above all else, reflective of architectural fashion at the time that Houston began to swell in population to one of the nation’s major cities. One must always consider that Houston was a modest city even up the second World War; Modernism and Art Deco, as well as their associative building materials, are uncommon or often threatened in Houston and other Sunbelt post-war boomtowns. Compare this to New Orleans, which was the largest city in the South in 1900 and remained prominent through the Depression, when cities such Dallas and Houston started to overtake it.

The somewhat homogeneous texture to Houston’s skyline also correlates to a dearth of buildings between four and ten stories in height. Most Midwest and Northeastern cities peaked in the late 1900s, when hydraulic elevators were a pioneer innovation, neither fast nor particularly safe. Thus, buildings were often limited in height to the number of stairs people were willing or able to climb. Houston had a population under 50,000 in 1900, making it the 85th largest city in the country at that time. The proliferation of electric elevators in the 1880s finally allowed the emergence of the first true skyscraper, a 10-story structure in Chicago. As elevators became safer and more efficient in the next decade, buildings would soon surpass this height in Chicago and other cities.

But not in Houston. Though Houston’s leadership attempted to make it a port and railroad hub, the city’s rapid growth, which finally began in the 1920s, is predicated on petrochemicals. Without the logistical prominence of other rail and river cities, Houston lacks a strong warehousing identity. The result is what you see in the photos: high-rise Class A office space, spread thinly by the presence of low-slung, sprawling retail, hotel, and residential construction. This post is too simplistic to serve as a criticism of Houston—it is only natural that Houston’s skyline would look this way, and its lack of variegation in this regard is not a weakness but a reflection of its growth patterns. I have never visited Phoenix or Dallas but suspect that they would look much the same way. What some may denigrate in Houston for its lack of a middle layer of historic century-old buildings achieves a different kind of character through the amorphousness of Houston’s sundry business districts. Part of the city’s identity is that it has multiple business nodes that are often all visible simultaneously across the city’s flat topography. Whether these alternative downtowns are edge cities or ancillary economic clusters, they add a distinct character to the act of driving around Houston that old monocentric cities of the north simply cannot achieve.