Cheapened by the nosebleed view?

If you want evidence that the economy of the Pittsburgh metro area has long been in the doldrums, you can use any variety of studies: year-to-year changes in GDP provided by the Bureau Economic of Analysis; job growth patterns there in relation to the rest of the US by the Bureau of Labor Statistics; the correlation of economic health to net population growth with figures provided by the US Census Bureau….or you can just use your eyes.

For those who don’t know the topography of Pittsburgh, it is fair to say it is one of the most dramatically hilly cities in the US outside of San Francisco. The original Fort Pitt stood at the terminus point of the Ohio River, where it diverges into the Monongahela and Allegheny Rivers, like a fork in the road. Today this location, known colloquially as the Golden Triangle, comprises downtown Pittsburgh. Though I never was there to witness the “before” scenario, it has apparently witnessed a remarkable transformation—a beautification by most metrics. Gone are the steel mills that dominated the tip of the Triangle after the collapse of the industry in the 1970s and 1980s; in replacement is the verdure of Point State Park. While the Golden Triangle is relatively flat, it is sandwiched between two majestic bluffs on the opposite sides of the Monongahela and Allegheny Rivers, which at some points, are so steep that pedestrian access is essentially impossible. (Cars often have to wind their way up the hill through lateral arcs or bypass the bluffs altogether though tunnels.)

Atop the bluff south of downtown is a neighborhood overlooking the Monongahela River; both the bluff and its associated neighborhood are called Mount Washington. From the perspective of a person in the Golden Triangle, this is what it looks like: 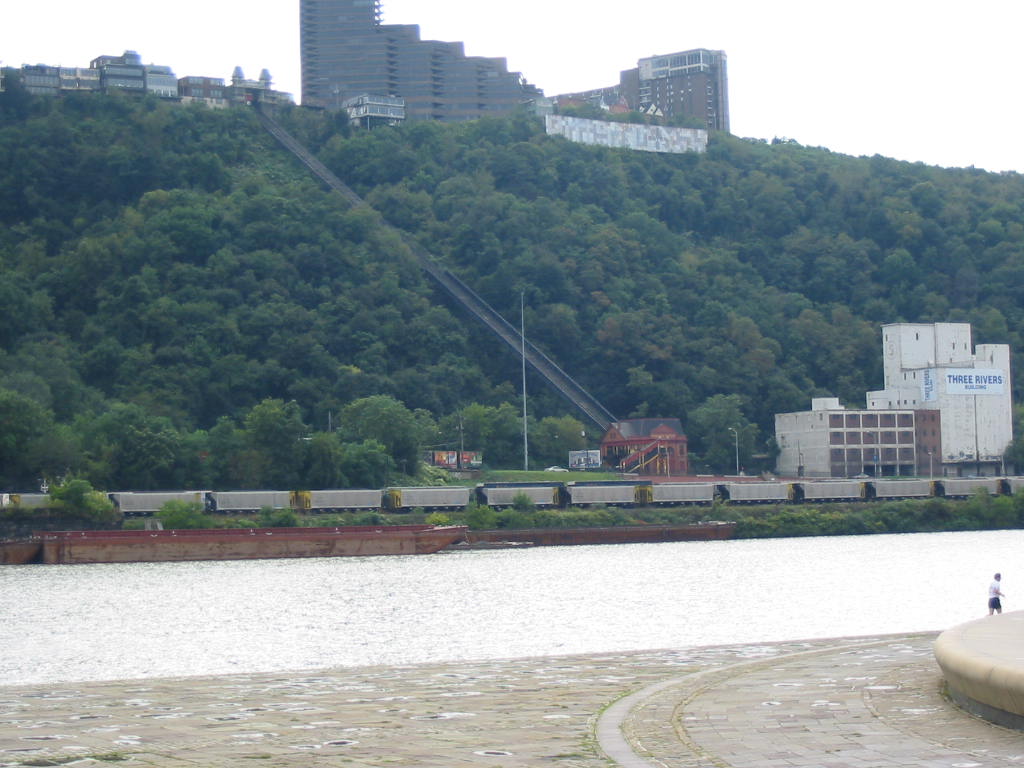 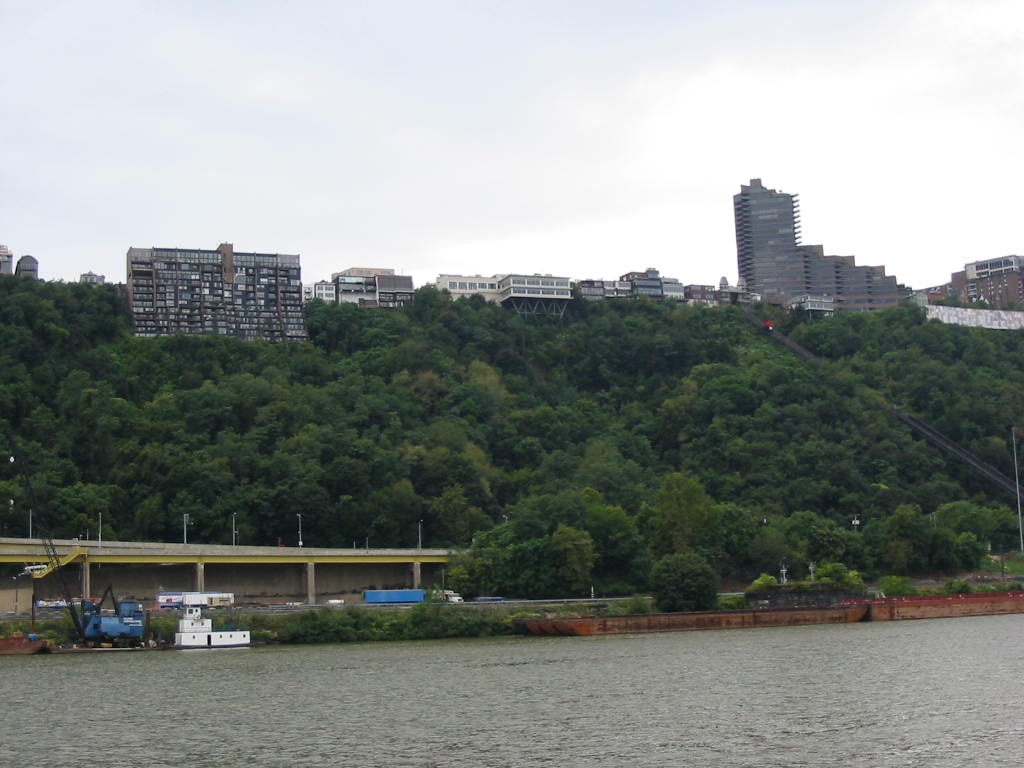 To the right in the second photo (and central in the first photo) is a funicular railway just across the river, known broadly and locally as the Duquesne Incline, which allows pedestrian access to the top of Mount Washington, in which, clearly, a number of houses lean precariously on the edge, capitalizing on the august view. At their peak in the late 19th century, Pittsburgh had nearly two dozen inclines; now the city has two, and the Duquesne is popular among tourists. While riding the incline upwards, passengers understandably gain an increasingly panoramic perspective of the city center, so at the top they are treated with this lookout point: 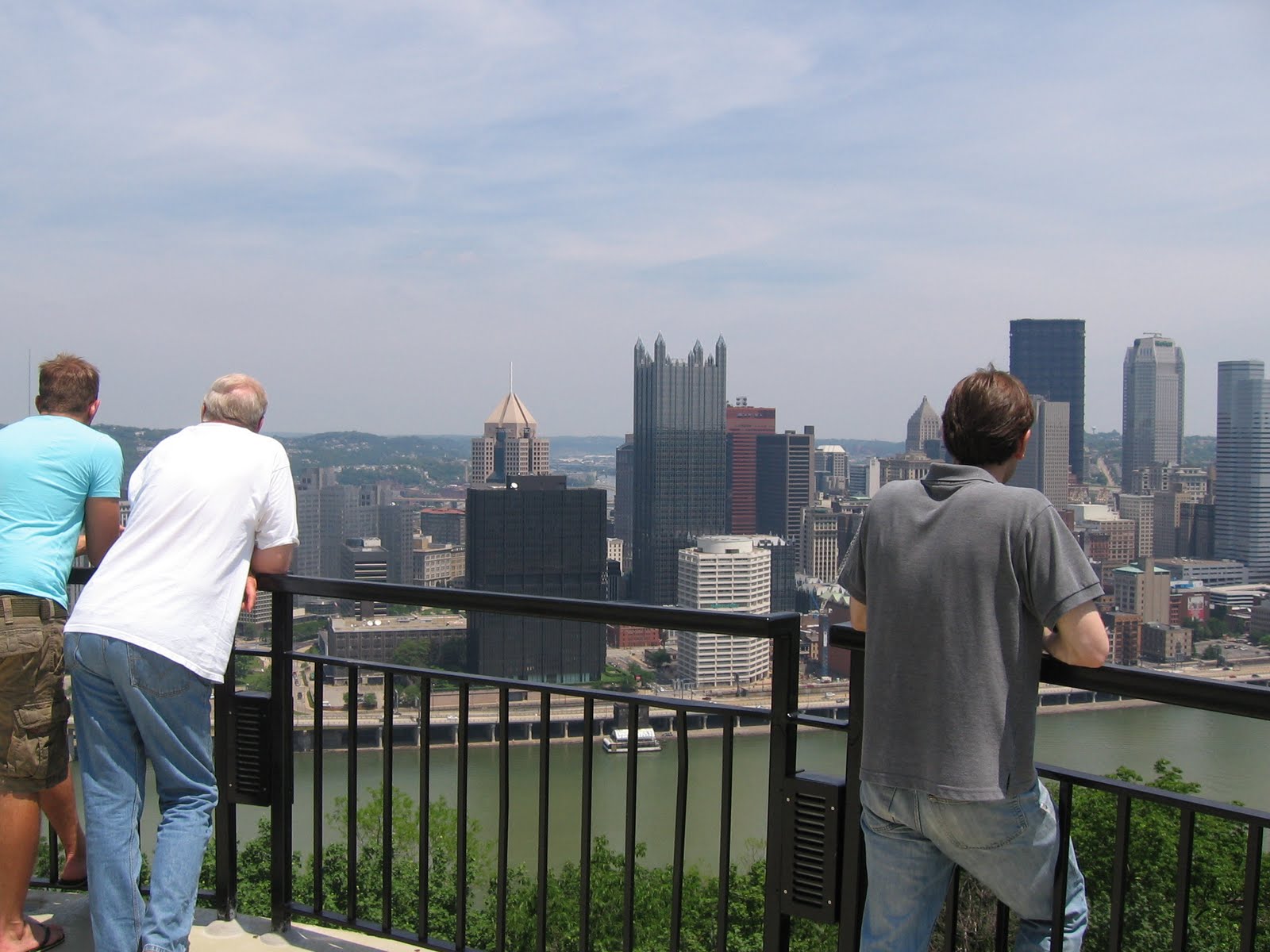 A few more, to show the density of the Pittsburgh skyline as it fronts the Monongahela, with its numerous bridges: 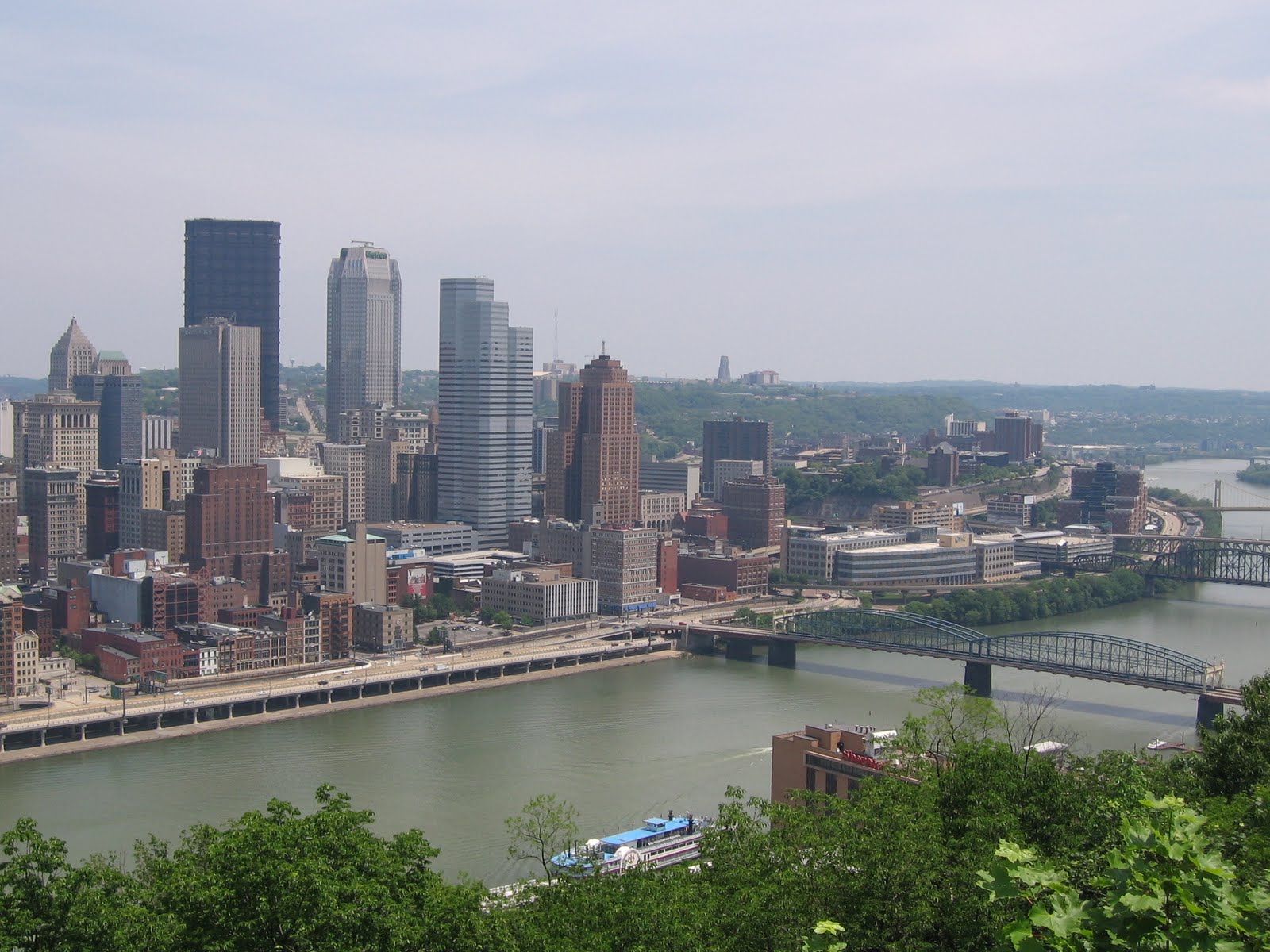 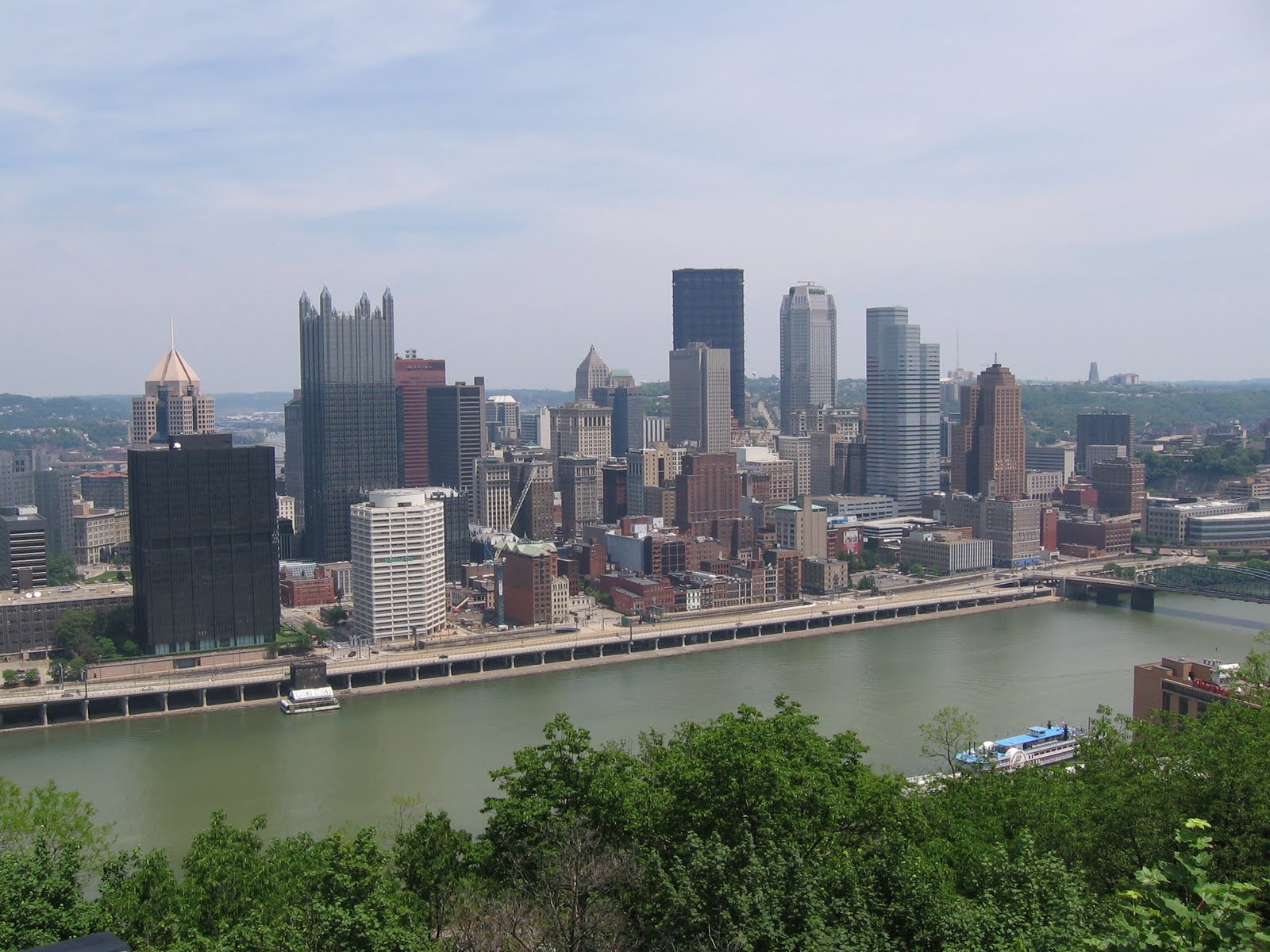 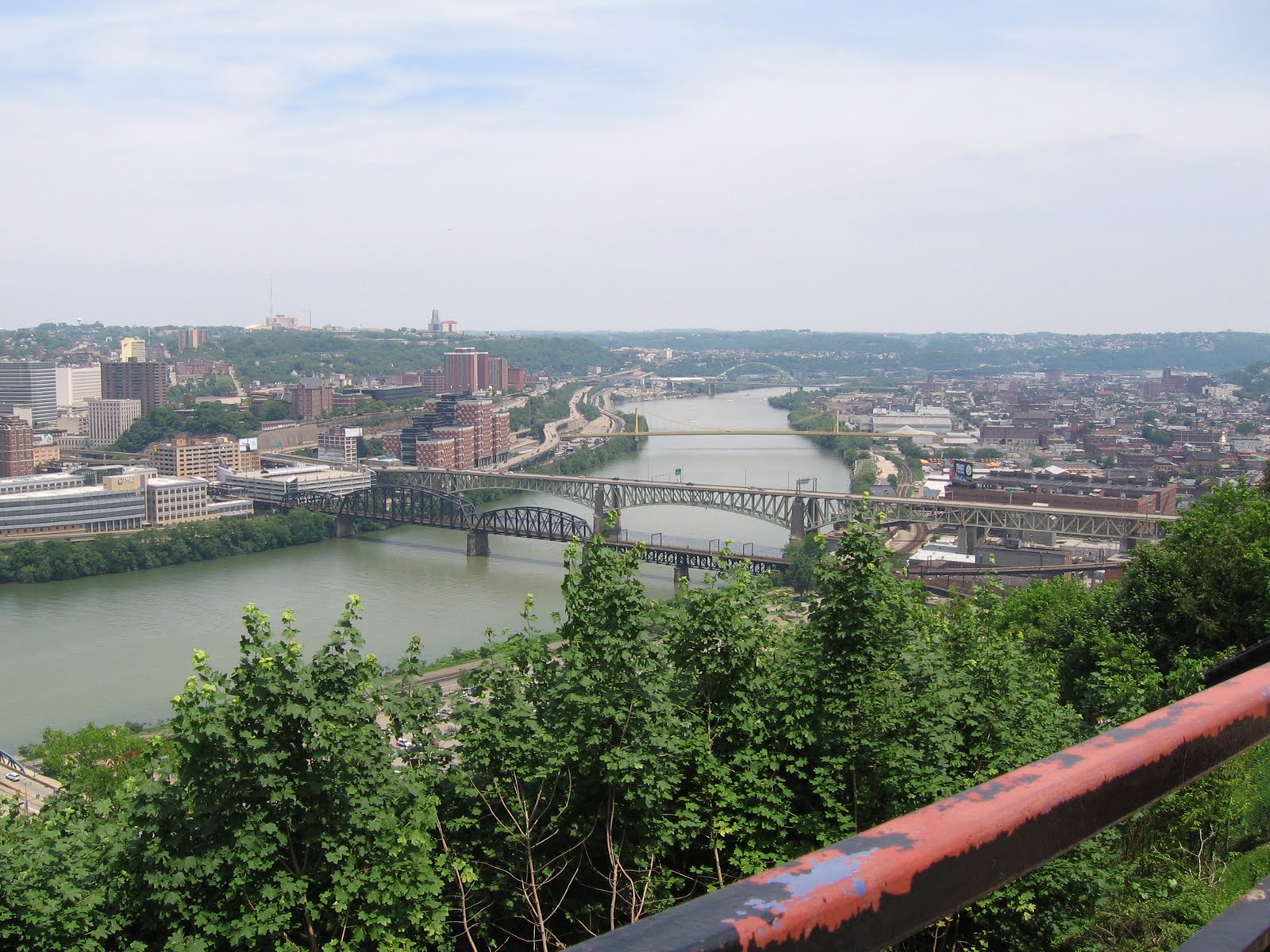 Returning to the ground level photos, one can easily see from the housing on Mount Washington that at least two large condo buildings have taken advantage of the view, which is understandable.

While some people can very legitimately claim that such edifices are a blot to the landscape, just as many will see a development opportunity for residents seeking a view. However, these two multifamily buildings are an exception rather than the rule. Up there in the Mount Washington neighborhood, just a little down the road from the lookout point, are houses such as this, also benefiting from the view: 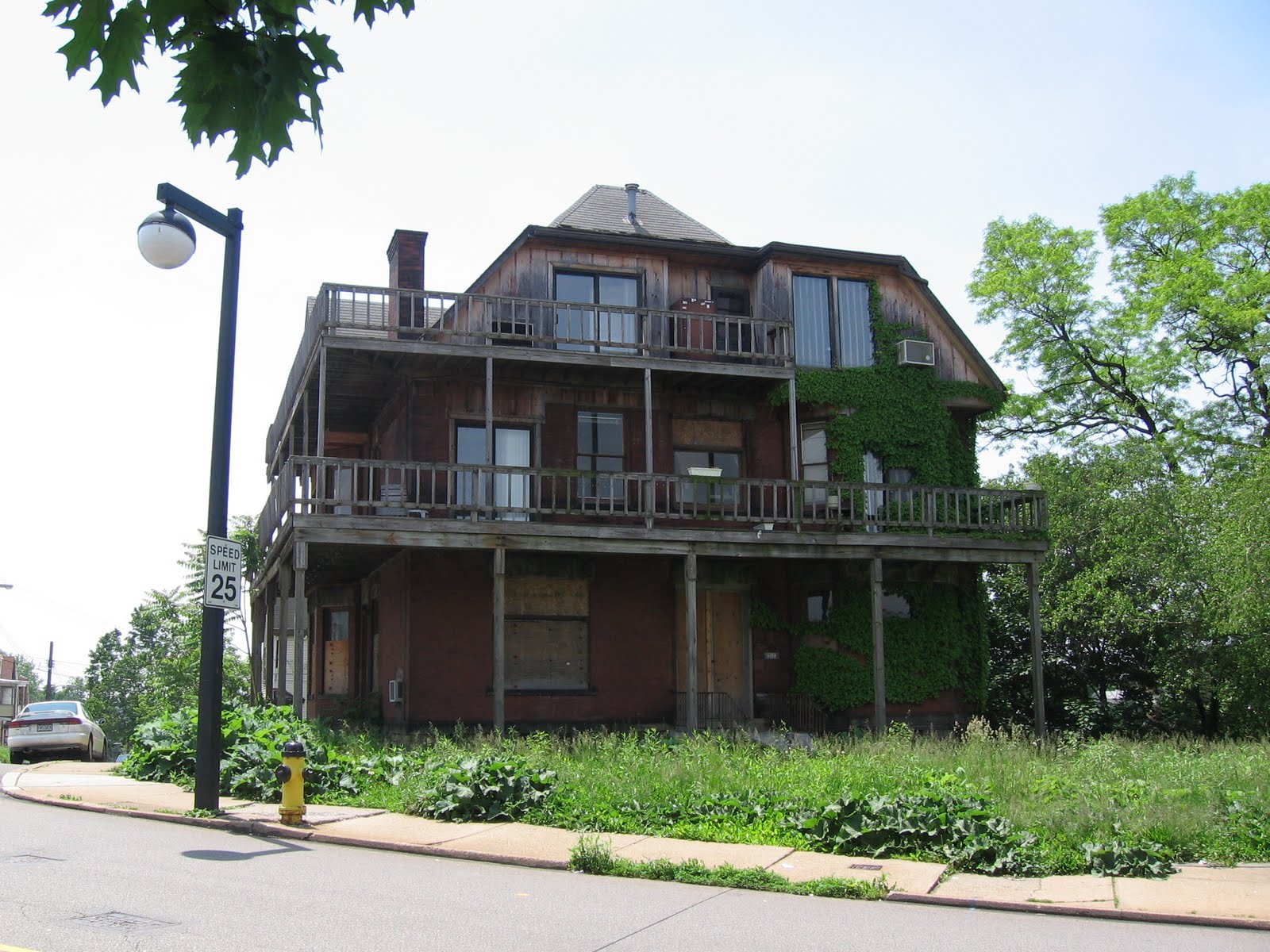 This house, too, is an outlier—most in the area don’t appear so downtrodden. But, judging from the graying color of the plywood, those boards on the windows in the lower level aren’t recent. The very fact that even a single house looks like this in what should be extremely desirable real estate by virtue of the view alone is an indicator of the profundity of Pittsburgh’s economic malaise. Walking around the Mount Washington neighborhood away from the overlook (and thus deprived of the view) is a generally well-kept but hardly affluent community. 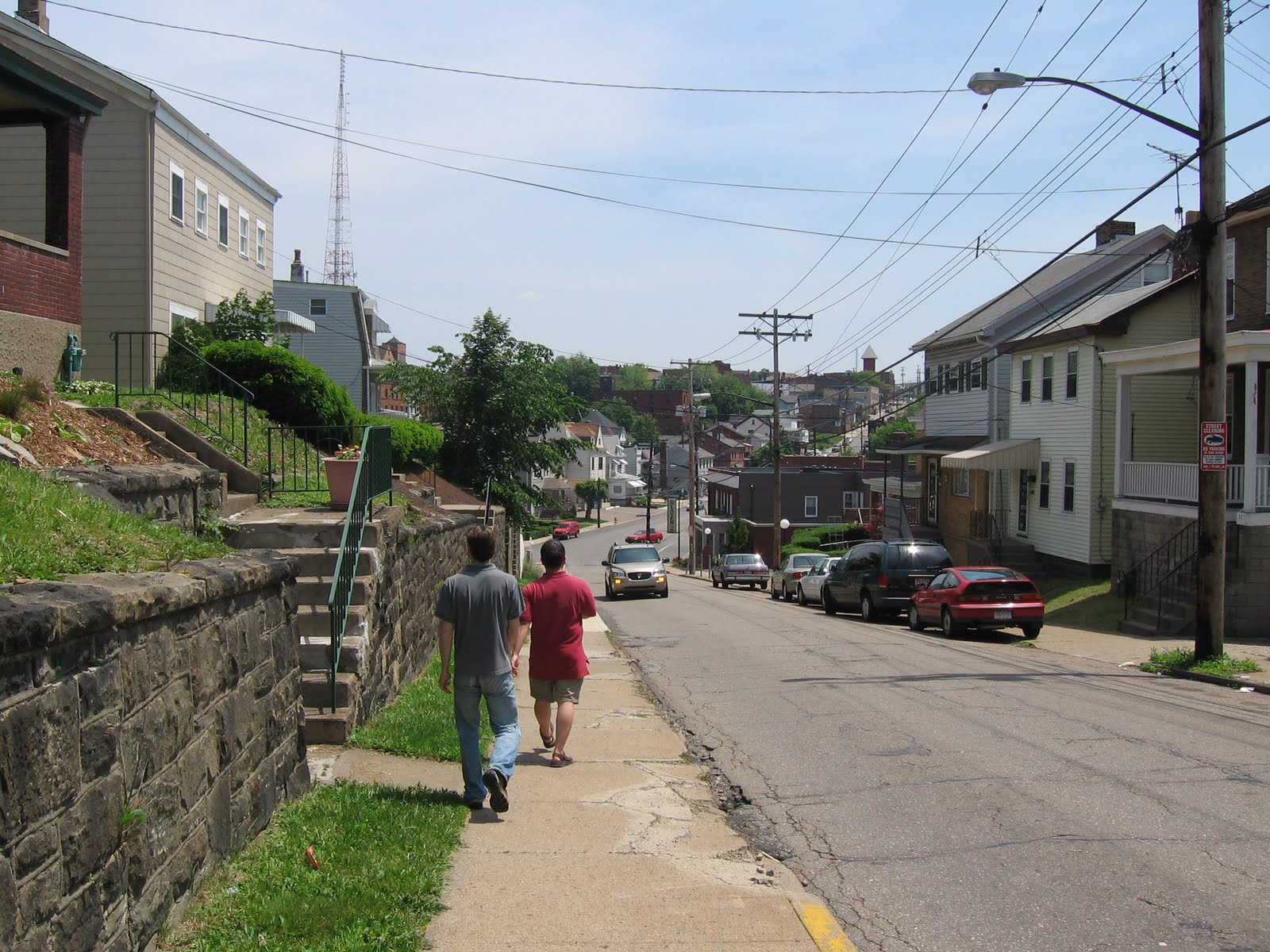 Our impression of the neighborhood from views of front porches and patronizing a local deli was that it was dominated by elderly white people. Nothing wrong with that. But think of this view transposed to San Francisco or Seattle; it would have been dominated by ultra-wealthy yuppies or baby boomers walking their dogs, maybe pushing children in strollers. These pictures were taken in 2006; perhaps the neighborhood has become a hot commodity in the ensuing years, in which case a Pittsburgher could easily refute my argument.

But that dilapidated house—with fenestration clearly intended to absorb the spectacle of the Pittsburgh skyline—burns in my memory. Even in 2006 that would not have happened in a city with a robust economy; it would have never happened, and Mount Washington wouldn’t remain sleepy, geriatric, and lower middle class.

One could easily accuse me of being unfair here—of failing to take into account the complex socioeconomic forces that have shaped Pittsburgh into the consummate Rust Belt city, with a subsequent recovery that, while undeniably aesthetically improved, has failed to stimulate any subsequent job growth. Perhaps I’m indirectly being a shill for gentrification. No, I am not offering a very sensitive urban analysis. But I am trying to think like a realtor. (And if that sounds like a dig toward realtors, I’m also trying to think like a homebuyer.) Realtors and buyers often have cosmetic priorities that scarcely penetrate the nuances of a neighborhood’s cultural history: I mean, who cares?! It offers a killer view! If the neighborhood really is filled with senior citizens, then it probably doesn’t have a high crime rate, and it looked clean, even if most of the homes could benefit from a renovation. For many with the disposable income to buy a home solely because of the view, these attributes may suffice. The multifamily buildings mentioned before seem relatively isolated and sequestered from the neighborhood around it: perhaps the demographics of these condo-dwellers are so radically different from the long-term residents of the simple homes that they have completely failed to generate any dialogue with one another. At any rate, Mount Washington isn’t saturated with such structures, so clearly few enterprising developers have jumped on board—these two buildings may very well have inordinately high vacancy levels.

This worm’s eye view, which evaluates prime real estate that has failed to ignite, undeniably paints the economic scenario with a broad brush. But such a view comes closer than any bird’s eye statistical analysis to capturing the palpable economic reality of this distinctive, often beautiful but ailing city. A city with the topography of Pittsburgh undoubtedly offers numerous opportunities for spectacular views. But so does San Francisco, and any home such as the one seen above would easily fetch $2 million, if Pittsburgh had San Francisco’s change in GDP, or its job growth, or internal in-migration, et cetera.

PrevKeeping up with the Vicksburg Joneses.
Pedestrian hatred rears its ugly head in the humblest of ways.Next

12 thoughts on “Cheapened by the nosebleed view?”