City dwellers may have to take a second look at the photo below even to recognize what it is: 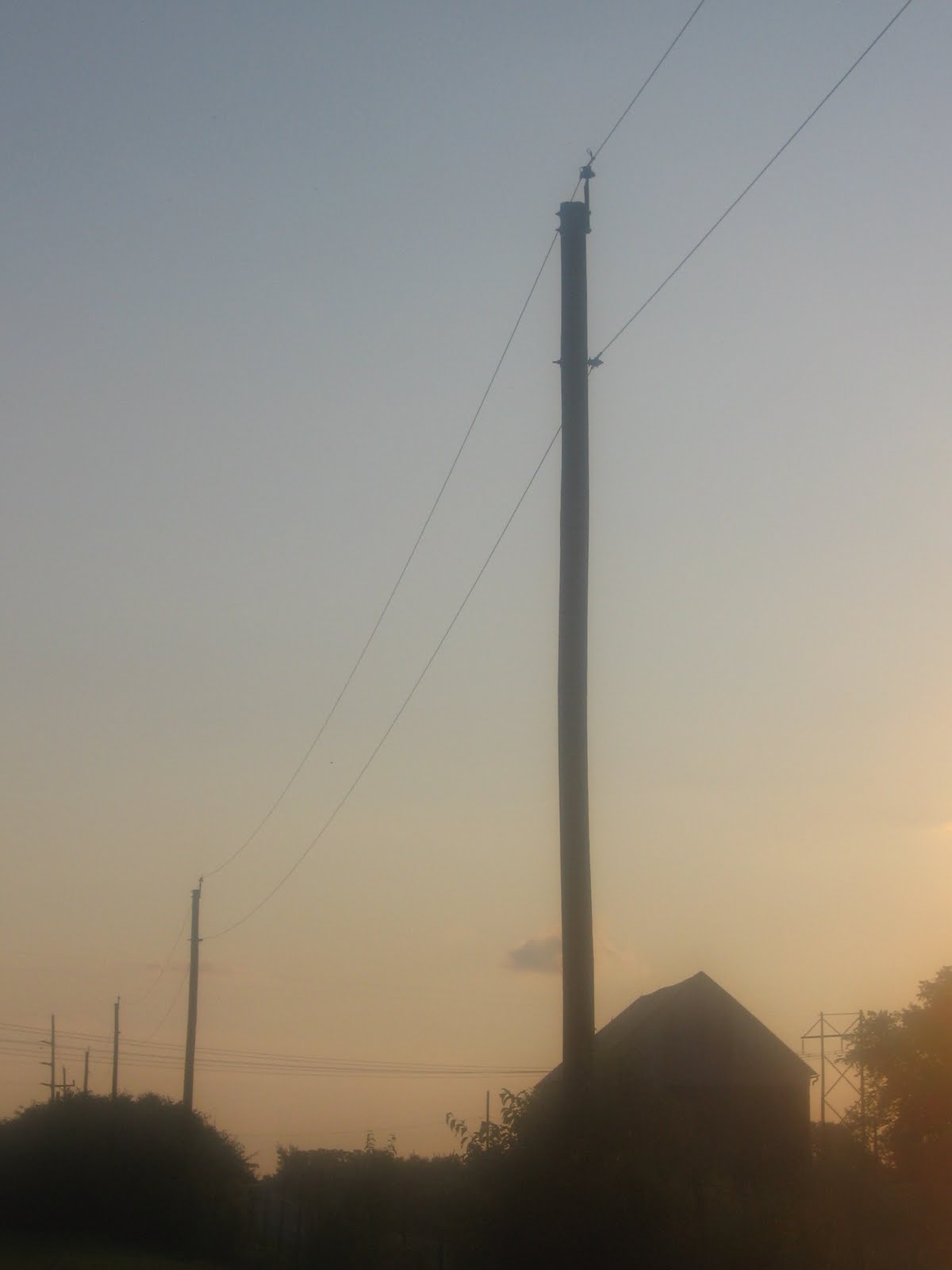 Yes, it’s a utility pole. But while we’re used to seeing a double (or triple or quadruple) masted pole carrying an assortment of parallel electric cables, this clearly isn’t necessary in rural, sparsely populated areas. In much of the country, population is scattered so thinly that, while the demand for electric transmission naturally remains, only a few conduits are necessary. Thus, we see a stanchion here but it only needs to elevate a few cables to residences in these far-flung locations. Judging from the picture, it would be fair to conclude that this is in an extremely rural part of the country, far removed from any major settlement.

Incidentally, though, this image is still within the city limits of Indianapolis. It is in Franklin Township, about 10 miles to the southeast of downtown. And this is what a significant portion of Franklin Township looks like.

As mentioned several postings ago, Indianapolis merged its city and county boundaries in 1970 with the passage of Unigov, resulting in a significant portion of undeveloped land suddenly falling under the City’s jurisdiction. Franklin Township, which occupies 42.1 square miles to the southeast of the central business district (which rests squarely in Center Township), has been the last of the nine major townships to witness any major urbanization. Though it has grown considerably in the past two decades, it remains a largely rural subcommunity within the larger city: 2008 estimates are that the population remains below 40,000 for this township, giving it a density of less than 1,000 persons per square mile. The infrastructure of the area largely supports this rural nature. The entire township has less than a dozen stop lights. Few roads beyond the interstate highway are more than two lanes. Only one bus route traces the eastern edge of the township, along Emerson Avenue. Roads such as east Edgewood Avenue (where this photo was taken) have visibly narrower truckways than the same road does in the much more heavily urbanized PerryTownship to the west. Outside of the new developments and subdivisions, which are required to place sidewalks on all roads (including the perimeter ones), almost all vehicular infrastructure anticipates a very low average daily traffic volume.

Nonetheless, if one were to project Franklin Township’s existing development trends into the future, it stands at a point of divergence. It is one of the fastest growing areas in Indianapolis, having nearly doubled in population since 1990. Each township in Indianapolis has its own school district, and Franklin Township’s district currently rates near or at the top in terms of student performance on standardized tests. School performance is one of the strongest metrics at gauging the desirability of a jurisdiction, which helps to explain why the township is growing steadily: for people wanting to raise children within Indianapolis city limits in a township with strong schools, Franklin would seem a natural choice. By many regards, the schools in Franklin Township do not have to face the challenges of other districts due in large part to the existing demographics: it is the most homogenous of the city’s nine townships. With few foreign-born residents, the township’s need for English Language Learners’ (ELL) curricula is lower than elsewhere in the city, though the district still releases informational material in Spanish and Punjabi. Homeownership is extremely high; the township only has a few apartment complexes along its western edge. Poverty in Franklin Township is quite low, and the median household income is above the city’s average. In general, the township has effectively functioned as a bedroom community for white-collar homeowners without the long commute of the more distant suburbs or the congestion and crime with which other, more urban townships must contend.

All of the aforementioned variables augur well for Franklin Township to grow steadily over the next ten to twenty years, which forces the civic leaders in the township to confront a problem: how much do they want to grow? If the area remains desirable and the City continues to approve new subdivisions, the township may suffer an erosion of the rural character that currently stands as one of its major selling points. The street with the simple power line in the photo above demonstrates this predicament perfectly. My photograph on east Edgewood Avenue is, I admit, a bit deceptive. Despite the fact that the utility poles in that picture suggest a virtually uninhabited, agrarian landscape: a significant substation sits immediately beyond these poles, fifty feet away from the street. 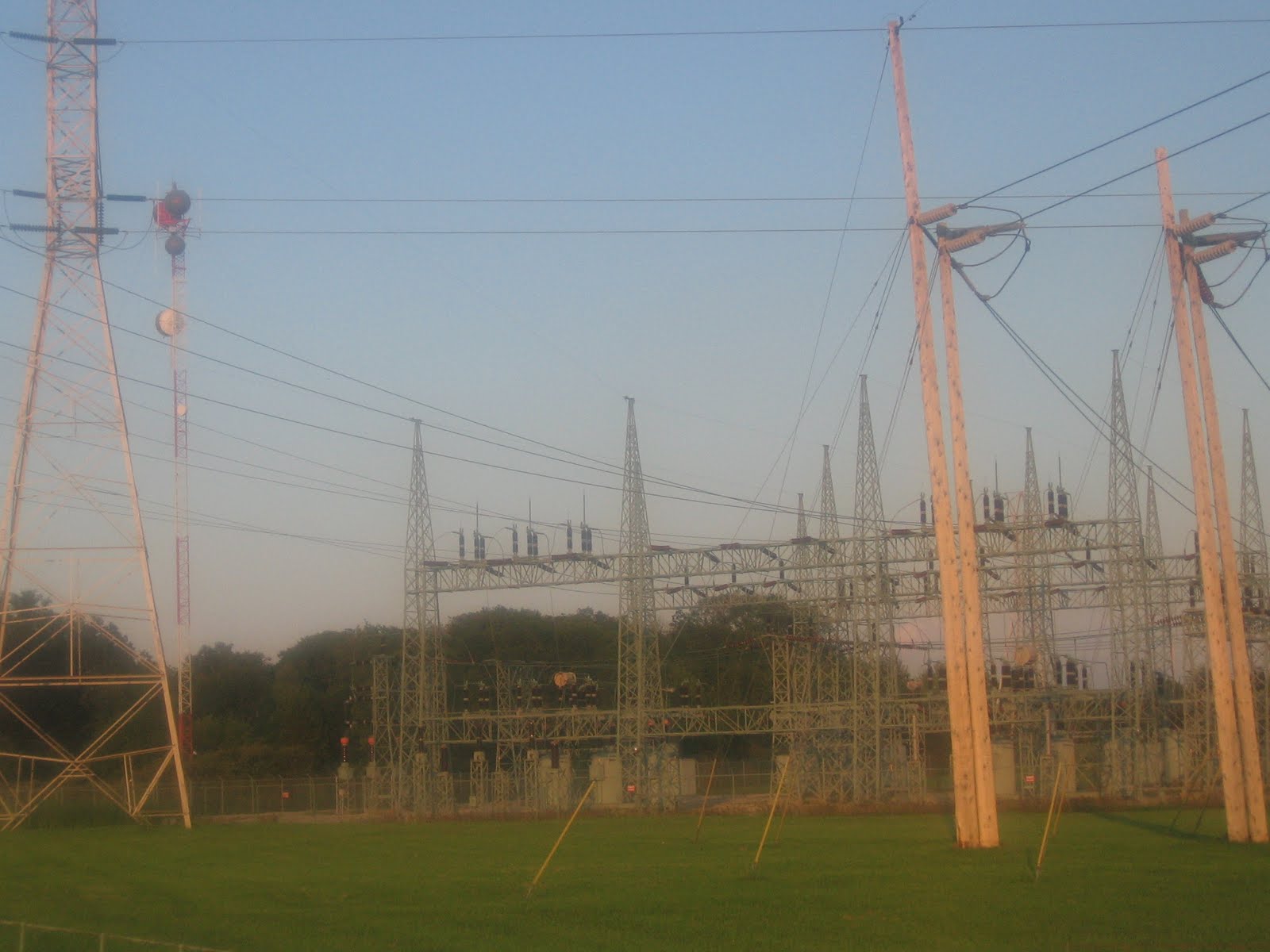 And across the street from the substation, electric cables of a greater density and sophistication slice across the pastoral horizon: 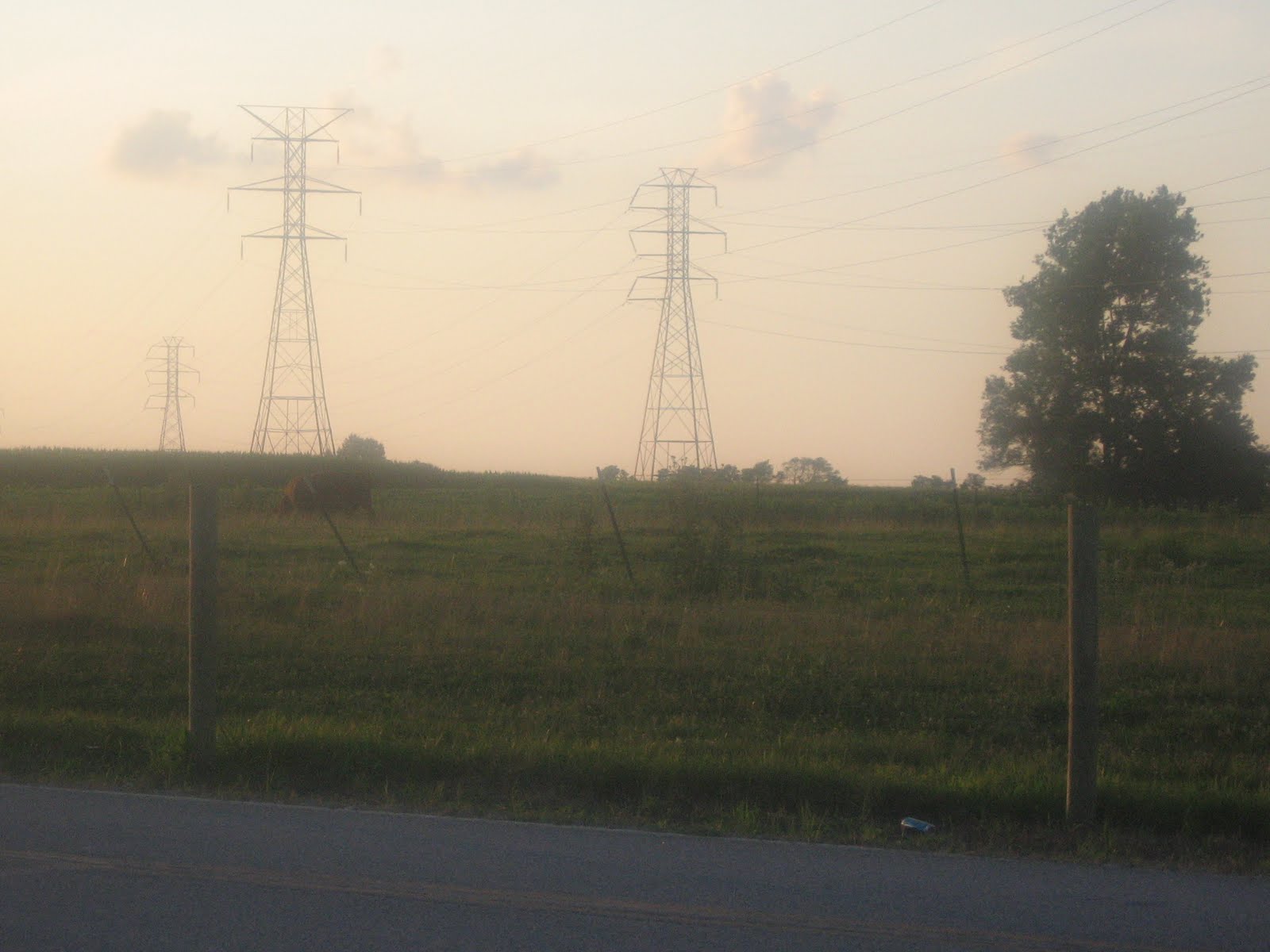 This picture demonstrates the calibration of Franklin Township’s rural/urban settlement pattern. A cow grazes near a narrow country road, with gently rolling hills of corn in the background—not a house to be seen. Yet the elevated utility towers point in the direction of a much larger community not so far away: the urban neighborhoods of Beech Grove and central Indianapolis. Few other Midwest cities have engaged in such aggressive annexation as Indianapolis did; many of them were already hemmed in by incorporated communities at their political boundaries, so cities such as Chicago, Cincinnati, and Detroit have remained more or less the same size that they were at the turn of the 20th century. Indianapolis’ vast stretches of countryside in Franklin Township are therefore a relatively uncommon phenomenon outside the Sun Belt. Much of the current development in Franklin Township is along its western edge, where it abuts the heavily urbanized PerryTownship. As one travels further toward central and eastern Franklin Township, approaching the edge of the Indianapolis city limits, the infrastructure gets increasingly rural. Witness McGregor Road, even further southeast than the above pictures: 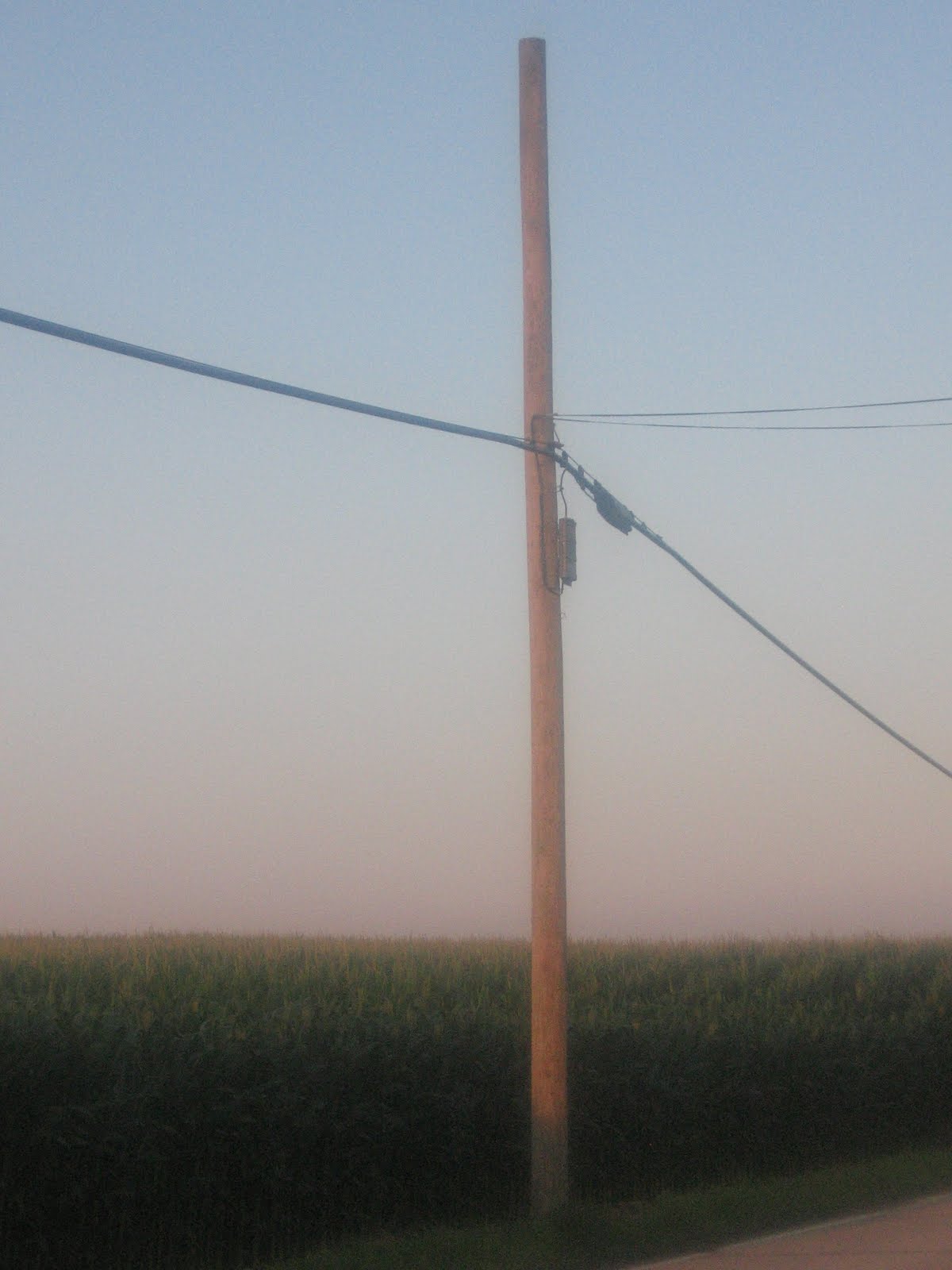 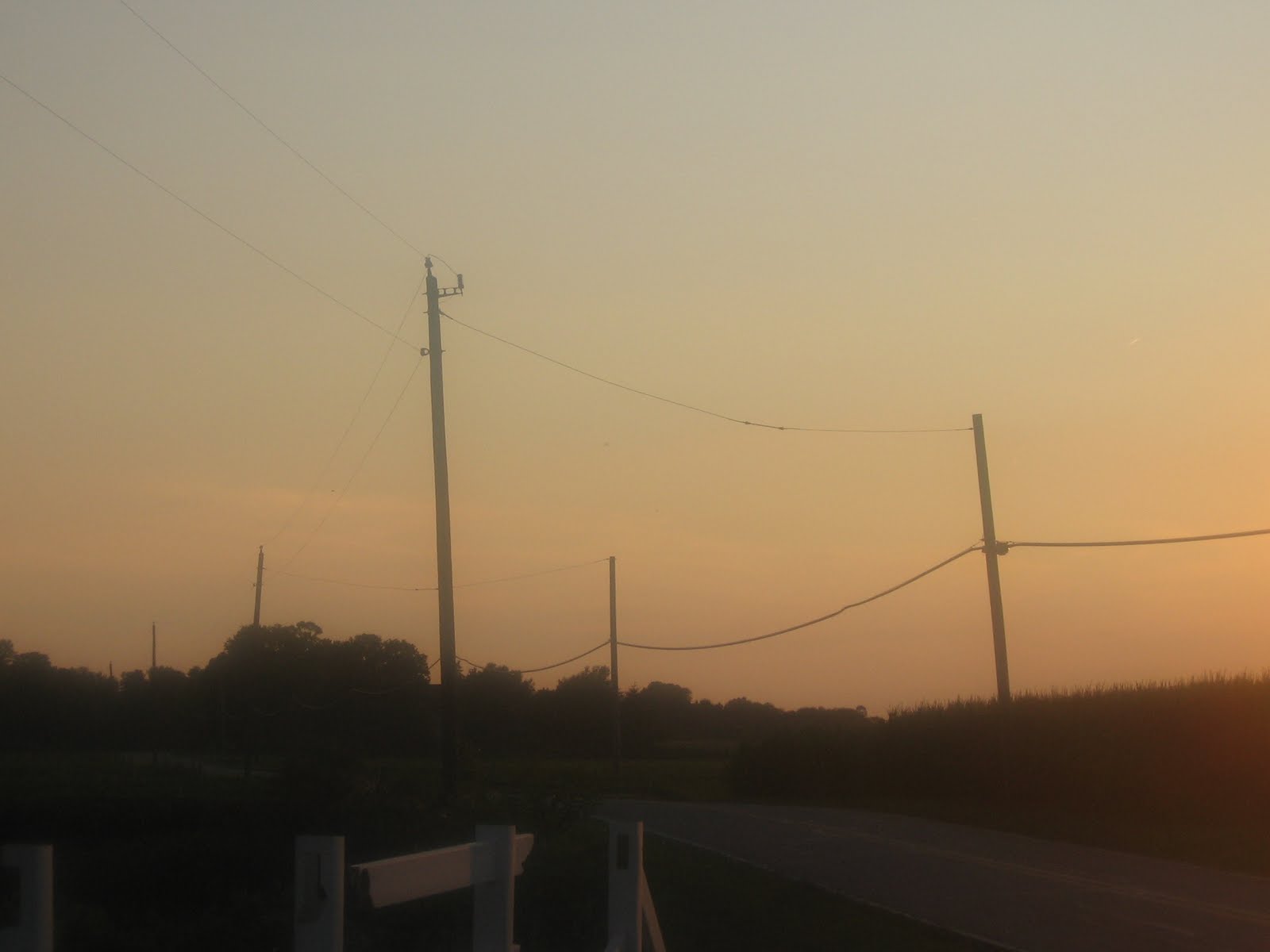 This time there is no substation nearby. But FranklinTownship is changing profoundly at the western boundary, where shopping plazas and office parks along Emerson have induced enough traffic to mandate street improvements, with widenings and sidewalks at various locations. Elsewhere, older communities in Franklin Township retain the feel of rural villages: Wanamaker, for example, has one stoplight, while Acton in the far southeast corner has none.

These power lines therefore beg the question: how does Franklin Township want to grow? Despite steady development, the township’s growth pales in comparison to some of the more desirable suburbs to the north and west of the city. If the leadership in Indianapolis as a whole wishes to control rampant urbanization or to fight sprawl, Franklin Township provides an excellent point of scrutiny. Farmland preservation, already a common practice in ShelbyCounty immediately to the southeast of Indianapolis (and partially abutting Franklin Township), could prevent this bucolic corner of the state’s largest city from becoming completely overrun with suburban development. Then again, prohibiting growth here only encourages it in the more far-flung outer suburbs, and Franklin Township at least benefits from some road/water/sewer infrastructure—however crude—and reduced need for utility extension that might transpire in the unincorporated exurbs. Perhaps development in Franklin Township is a form of urban infill, in this day and age when the suburbs are growing much faster than the city as a whole (and parts of the city are shrinking in population). Basic laws of the economies of scale would suggest that it is currently more costly to provide electricity to people on these simple, mastless electric poles than it would be to attach masts and more cables to the existing system. It also raises the question of burying electric cables, which is generally preferred in modern subdivisions since overhead cables often stymie marketability. However, it would be cost prohibitive to bury cables in sparsely populated areas such as this section of Franklin Township, and from what I am aware from my limited research on the subject, transmission across great distances is far faster and superior when the cables remain above ground.

The leadership in Franklin Township may need to converse with the city to determine what identity it plans to perpetuate itself as a community. It most likely will not remain the domain of affluent, white exurbanites, but it may also never develop as quickly as Plainfield, Carmel, Fishers, or Greenwood. A few weeks ago when blogging about Complete Streets, I devised a rudimentary prioritization plan for improving the pedestrian infrastructure along Indianapolis roads. Few roads in Franklin Township would rate high priority for bike lanes, sidewalks, or handicapped ramps; the density is simply not great enough and is unlikely to be for many years. But Franklin Township’s utility poles and cables that punctuate the farms and roadsides embody the problem posed by collective attitudes toward exurban growth in the United States. The affluent originally sought the area as a rural sanctuary to escape the crime, noise, and congestion of the city, but soon everyone begins to seek these amenities. Neighboring Perry Township was once almost as rural as Franklin but passed that tipping point long ago; now people in PerryTownship are moving further south, to communities such as Whiteland and Franklin to recapture that rural character. Soon those communities will urbanize to the point they will cease to think of themselves as small towns, and the cycle begins again.

Essentially, suburbanization—or “sprawl” if you prefer the pejorative—transpires as a friend of mine put it: “Everyone wants to be the last one in the club, and to close the door behind.” Farmland preservation may be a means of preserving a community’s rural character, but local officials can also wield it as an elitist and exclusionary gesture. Franklin Township is showing no signs yet of trying to shut out growth—the city wouldn’t want it because Franklin’s growth helps counteract population decline in other, poorer parts of the city. It offers a fertile and reliable tax base. But if it welcomes too much development it will squander the essence of its current desirability. Solutions might require a more nuanced evaluation of the land. Franklin Township currently occupies about one-ninth of MarionCounty (i.e., the City of Indianapolis); splicing the township into another grid of subunits can determine where, if at all, the land’s highest and best use may be to remain agriculture in perpetuity. Other parts of Indianapolis also have stretches of uninhabited land, but as far as the demand for greater decision making goes, Franklin Township is where the rubber hits the road.

3 thoughts on “When plural isn’t needed to describe power line(s).”