Judging the appropriateness of streetlights.

A couple weeks ago when I wrote about complete streets, I tried to scrutinize the most critical components for accommodating the full spectrum of users: bike lanes, signage, handicapped ramps, sidewalks/trails (and their respective nomenclature), signals, and so forth. One infrastructural element I neglected to recognize was lighting. I also failed to acknowledge traffic calming, but I will need to save that for a time when I have photos of good examples.

As I mentioned before, most of the arterial and collector streets on the south side of Indianapolis lack completeness in terms of good sidewalks or wide shoulders; they continue to function as almost rural roads. The lighting infrastructure also frequently resembles that of a country lane, with huge gaps between streetlights in areas that certainly have the population density to justify smaller spatial intervals between lights, keeping critical roadside elements lit for the driver without excessive brightness that can interfere with drivers’ nighttime vision. Many streets outside of the oldest urban sections of Indianapolis lack this and lighting is increasingly rarefied. When one travels more than six or seven miles away from the city center, it becomes clear that the city’s utilities/public works had a specific scheme for lighting: build one at minor intersections (collector-local or local-local) and build two or three at major intersections (arterial-collector).

One neighborhood on the south side of Indianapolis that achieves a better-than-average level of walkability to its streets (at least by southside Indianapolis’ standards) is Homecroft, a bedroom community of Cape Cods and Tudor Revivals from between the World Wars that was an early stop on Indianapolis’ once superlative interurban network. The neighborhood is listed on the National Register of Historic Places, and the homes have aged well, not only because of their high construction quality, but also because they occupy an urban design vernacular distinct from most of the areas surrounding it. The streets are parallel and grid-based, and, until a tornado badly hit the neighborhood in 2002, the tree canopy was strong. (The homes themselves recovered fully from the tornado, some new trees have been planted, so one can scarcely tell now that many of the trees were denuded, though the canopy has a long way to go.) In addition, Homecroft has some sidewalks and reduced speed zones, making it easy to walk to a few neighboring schools, churches, and even a bit of shopping, the latter of which is generally in the form of strip malls, since the commercial areas rest outside of the neighborhood boundaries. 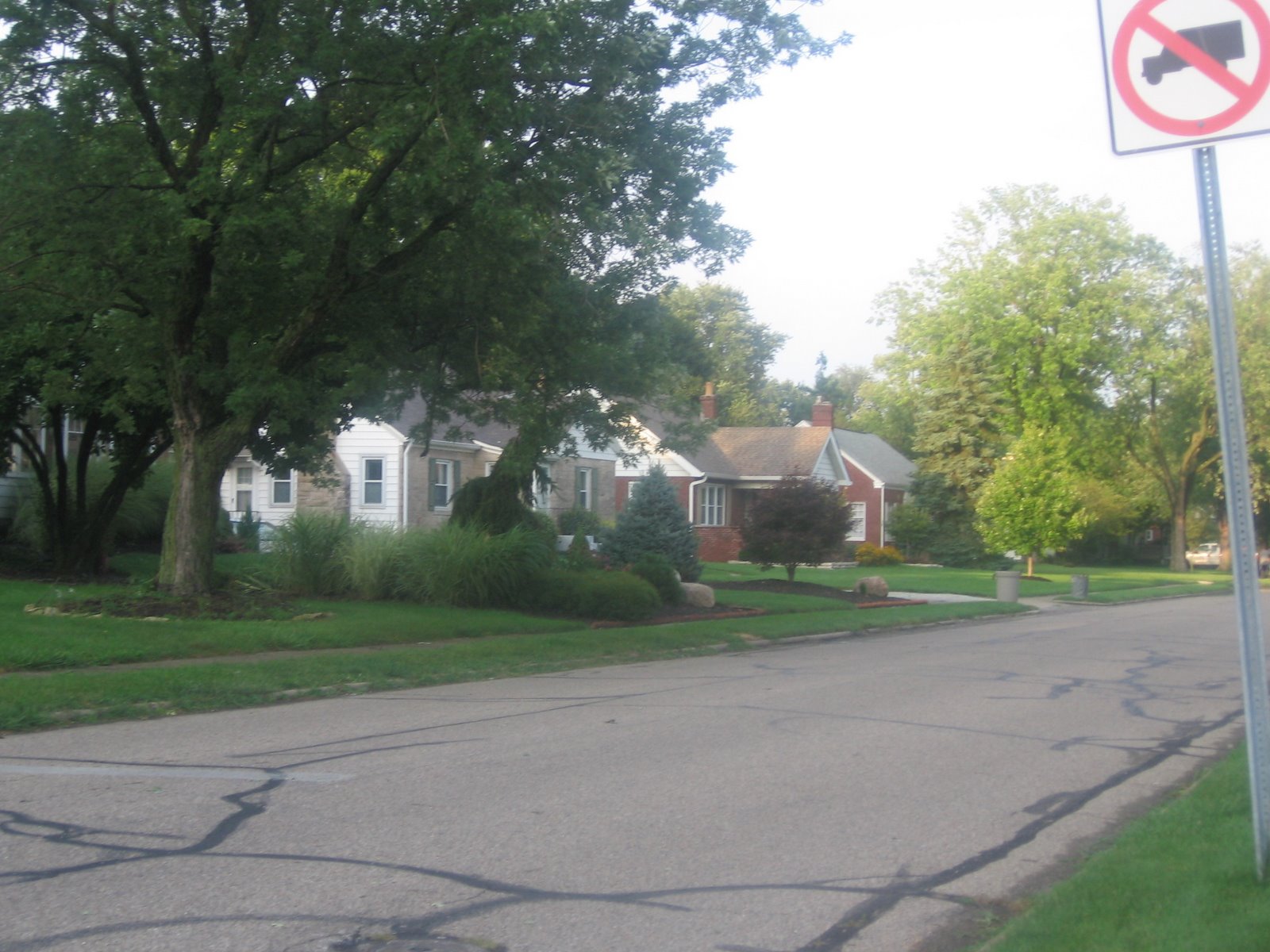 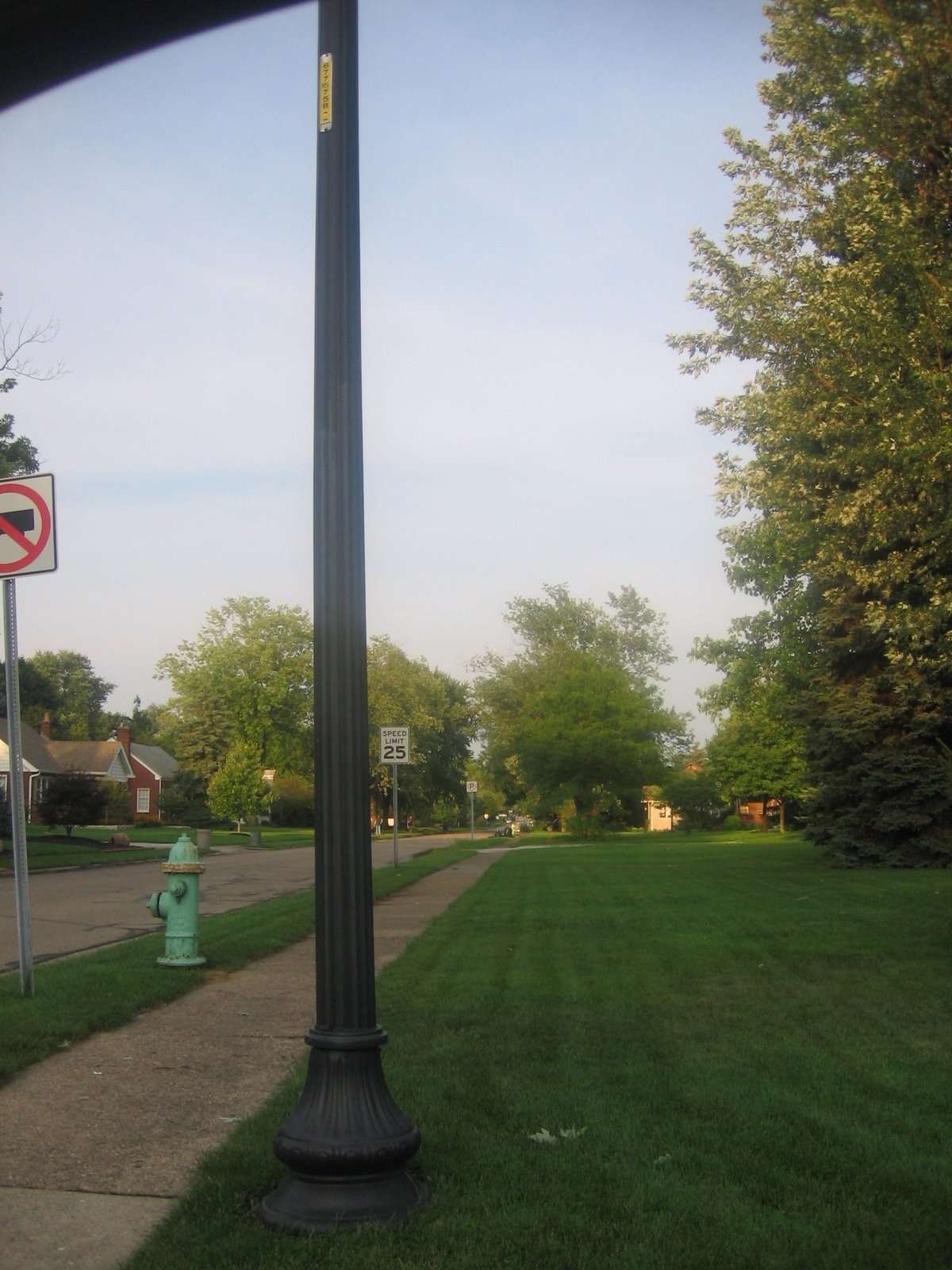 Another distinguishing feature of Homecroft is the style of streetlights. The unmistakable city-managed streetlight illuminates the verge of all the surrounding streets, with the arm of the light attached either to a free-standing stanchion or an existing utility pole. These conventional roadway lights seen below are intended to point out hazards or signage that a car’s headlines might not catch: 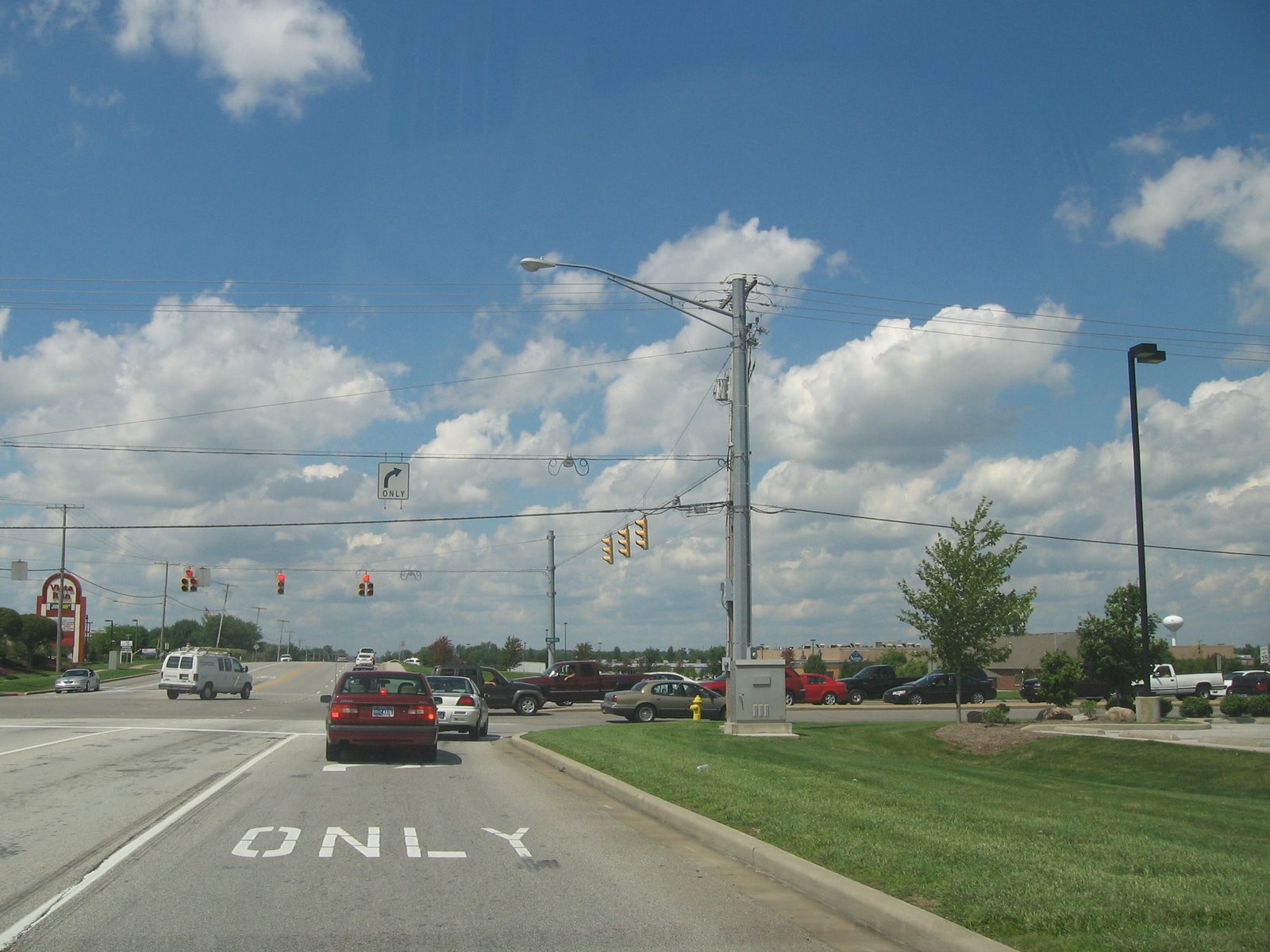 In Homecroft, however, the streets use a black lantern atop a shorter pole with a softer luminescence, as seen below: 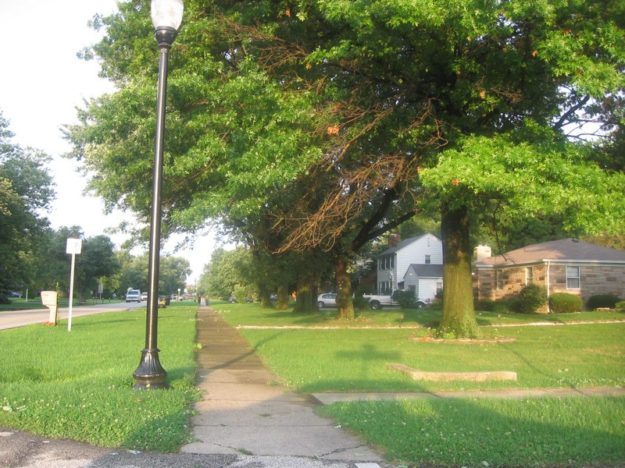 The result appears more intimate and appropriately scaled to a walkable neighborhood, more like a beacon light, intended to illuminate the sidewalk and identify the right-of-way for drivers without brightening the road in particular. At night, the change in character from conventional stanchion lighting to these shorter lantern poles provides a distinctive visual cue to indicate that one is entering a different neighborhood—particularly when one is traveling along the arterial Madison Avenue. The application of these lights would work wonderfully for Homecroft, and in some areas it is quite effective; however, the sidewalks in the neighborhood are inconsistent. For example, Banta Road on the west side of Madison Avenue has sidewalks, as seen above in the first photo, whereas on the east side of Madison Avenue it looks like this: 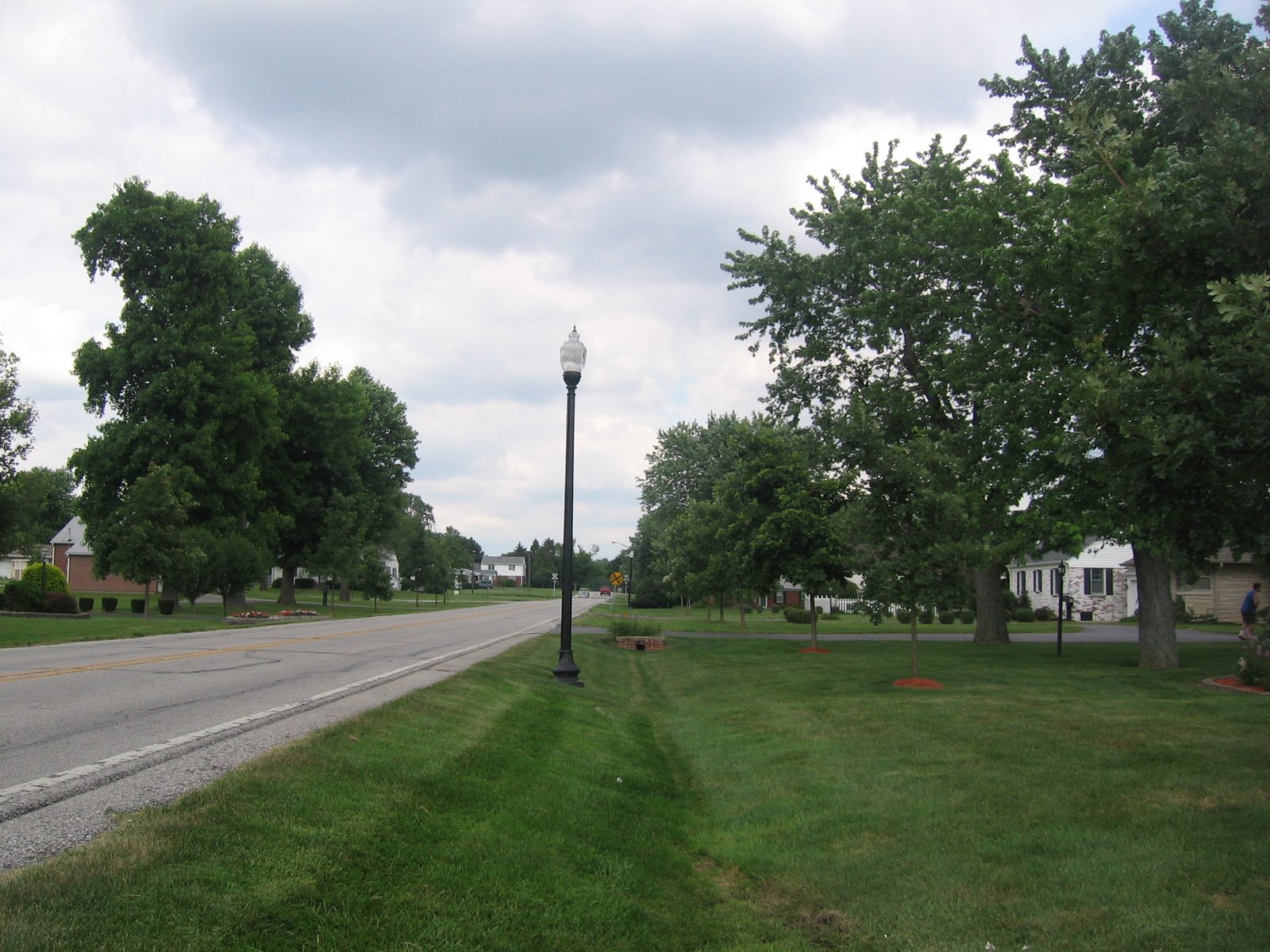 Thus, we get the intimacy of beacon lights in a historic neighborhood without the desired walkability. The result is jarring and detracts from the character of an otherwise very attractive neighborhood. In addition, the streetlights offer very little benefit to drivers, since they are not bright enough to illuminate speed limit signs, so the overall function of these lights diminishes, particularly in the area with no sidewalks.

Homecroft is a rare example where the combination of beacon light and sidewalk are enough to achieve something resembling complete streets. On a summer evening, residents of Homecroft can be seen walking dogs and riding bikes along the streets, sequestered from traffic and with high mobility. But the failure to place appropriate lighting in the area dominated by automobile traffic east of Madison Avenue weakens the effect and makes the lanterns on the above photo seem almost like a superfluous utility expense. If the road remains restricted only to automobiles, then it needs more advanced streetlights. However, if the road opens up to pedestrian uses, all it needs is a sidewalk; the suitable lighting is already there. Bicycle travel is likely to be safe without the need for bike lanes; the low speed limits and frequent stops keep cars at a speed below 30 miles per hour, so that most bicyclists can feel comfortable sharing the road.

My recommendation would be, not surprisingly, to complete the sidewalks along any road considered within the unofficial limits of “Homecroft”, helping link the churches, schools, and homes in the area. Beacon lighting should perhaps be spaced a bit more frequently to promote visibility for nighttime pedestrians. Despite its deficiencies, Homecroft needs far less infrastructural investment than many neighborhoods in this part of Indianapolis in order to achieve complete streets—the dialogue between sidewalks and streetlights is the only true missing link.

2 thoughts on “Judging the appropriateness of streetlights.”