Generosity can be measured in meters.

Many municipalities see the pricing on meters for on-street parking as a science unto itself. Of course a city wants greater revenue, but it does not want to deter people from parking on the street—almost always the most preferred method over more costly garages—simply because the prices become too high. After all, parking meters typically only can flourish in urban settings, and if the price tag repels visitors from parking in them, it may very well dissuade people from visiting that urban neighborhood or city center altogether. This price sensitivity makes this meter in (photo taken earlier this winter) all the more hilarious to me: 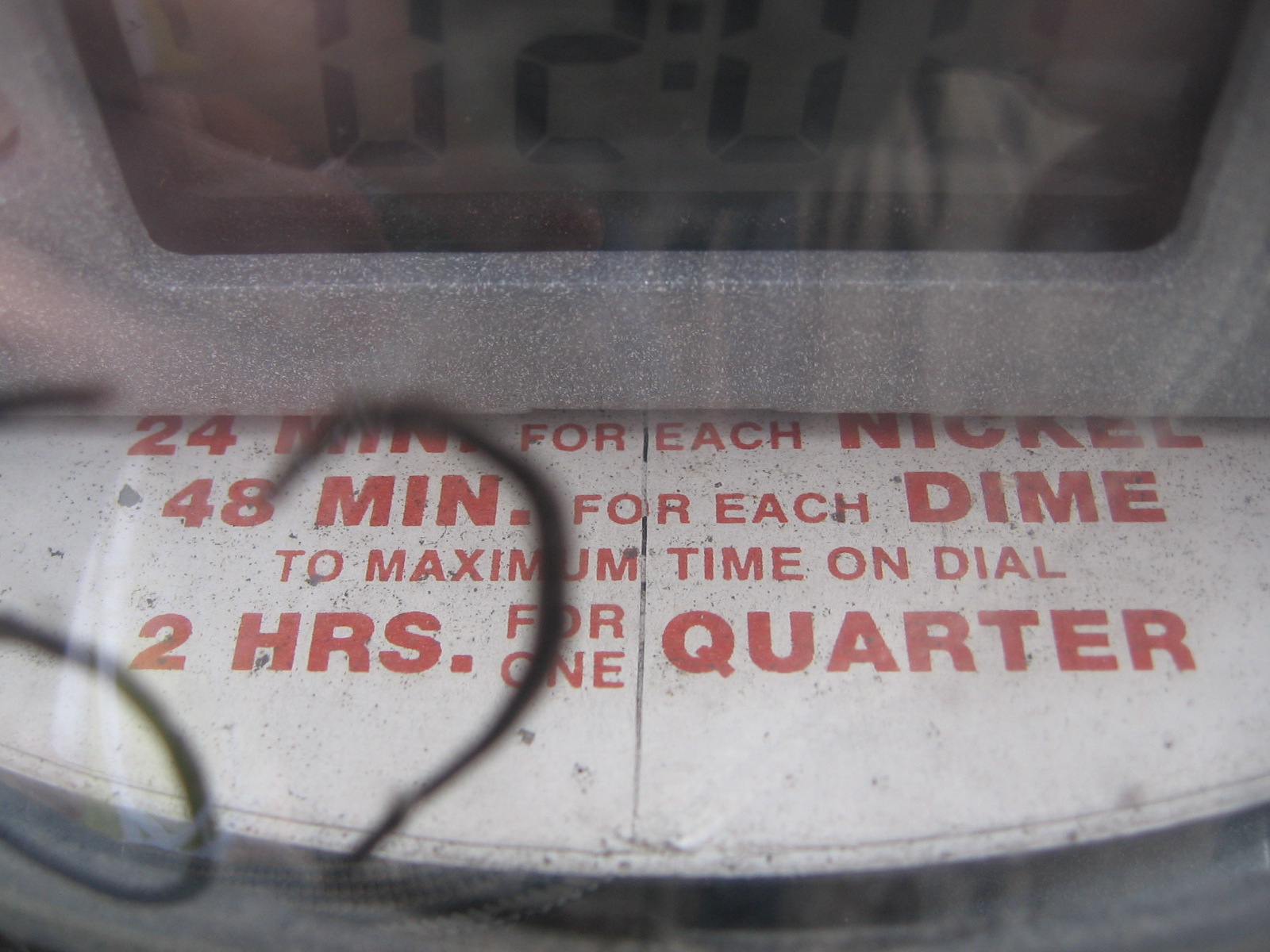 No, this isn’t from 1962, though I expect this might have been seen as a reasonable price back then. I’ve heard of low-cost parking, but this almost seems to defeat the purpose of charging altogether. Granted, this was not in Cincinnati’s downtown—I recall the meters there charging somewhat more on par with a national norm—but it was in the main street of the affluent Hyde Park neighborhood slightly northeast of the central business district.

Do the math. The absolute most the city can expect to make on this meter is $1.25 a day, if the meter hours run from 8 am to 6 pm, which is most likely the case because the majority of the businesses here are daytime only. One would hope that the city would not operate a street parking system that runs at a loss, but with such limited revenue, it would be hard to imagine the maintenance of these meters and the labor needed for enforcement could ever add much to the municipal budget.

Increasingly cities are rethinking the operation of their on-street parking fee collection systems, as evidenced by studies engaged in on measuring the viability of a long-term outsourcing contract. ’s revenue through parking meters spiked tremendously after a new contract, but the new costs aroused considerable ire from people living and working in the area. The city further stymied its own ability to make any changes in response to citizen frustration by entering a stupefyingly long contract of 75 years.

The modernization and upgrading schemes for parking meters in many cities have focused on machinery that expands the media for payment. This includes stations that can apply to a broader number of spaces by printing the receipt that shows expiration time, or those that allow credit/debit card and even dollar bill payments. While these seem like excellent ideas in theory, they have aroused frustration for being far less efficient and more prone to malfunction than the conventional, amiably quaint meter pictured above in . , for example, installed a new system of computerized boxes throughout its downtown shortly after Hurricane Katrina; these new meters accept plastic and are placed less frequently, since they print the time of expiry for users to place in their windshields. Frustration began to mount within only a few months, when the machines rejected users’ credit cards for no discernible reason other than failure to read it (the card itself had not been declined). Some of them were out of service, requiring the user to walk several blocks to find a box that did work, then return to his or her windshield to place the receipt there. Many people gave up and were forced to make the difficult choice of parking without paying and bearing the risk of getting a ticket, or just seeking an off-street parking garage and paying more money. This undoubtedly will become less of a problem as technology improves, but a city may want to avoid the problem of hastily embracing a new system because it looks sleek and modern; three years after installation, few metering systems seem as clunky as the ones in New Orleans, yet I’ve seen other cities install this same model as well.

An additional situation that new metering systems hope to rectify is the free rider problem. This occurs when a person pays for an hour at a meter and only uses fifteen minutes, giving the next user the opportunity to “cash in” on minutes that someone else paid for. Obviously most on street parking users don’t see this as a problem—it’s just a great bonus!—but it doesn’t help the city in ascribing a price to its on-street parking network. When a city goes for the bottom-of-the-barrel cost as we see here in , , it becomes increasingly easy for users to cheat the system. Enforcement often fails to cite for all-day meter users, concentrating its energies and violations on expired meters or illegal on-street parking, mostly because it doesn’t want to appear excessively draconian to on-street users that might otherwise seek their goods and services in the free parking of the suburbs. The retail abutting these on-street spaces also needs the business and would scarcely support high-cost meters. Thus, a person can put a quarter in, stay for and hour and 55 minutes, then come back, put another quarter in, wait another hour and 55, and so forth. Why should they use city-owned garages for a day of urban parking if they cost upwards of $10 when they can use a meter in all day for a little over a dollar?

The modern boxes aim to reduce or eliminate both of aforementioned concerns by issuing paper receipts, so that the payment can only apply to that specific car and not one who comes in afterwards to freeload on the previous users’ remaining minutes. This is fine and good, but with paper receipts, any users who pay for a short, perfectly legal interval (such as 15 minutes) are bound to that time frame. If they then realize after five minutes that they need to pay for an additional 30 minutes, they cannot “add on” to their existing allotment by simply paying more into the meter; they have to wait until the actual clock time equates to the time on their receipts, then start over by feeding the meter again. So the meters attempt to expand flexibility through methods of payment but also inhibit it in terms of impromptu visits to urban services. A person cannot change his or her mind easily after agreeing to buy an allotment of time on the electronic, receipt based meters. These users must “ride out” the remaining time on the meter before adding more, or they must accept the fact that they will have to double pay for some overlapping allotments on the meters.

Meanwhile, the City of , which is hardly a stranger to expensive city parking, is apparently incurring wrath in some neighborhoods simply for raising the costs up from a meager original rate of 25 cents an hour. Granted, the increase was 300% to one dollar an hour, so while the rates remain relatively low, such a sudden jolt is likely to perturb the users of on-street parking, even in an area such as where public transportation is strong and parking on the street is often subject to strict regulation. Apparently the private company in charge of the new lease on the parking meters took most of the heat, but did the city really have to agree to a contract that is as long as the typical human’s lifetime? Maybe the neighborhood in Cincinnati is doing perfectly fine with its current system, but clearly the change to something as seemingly mundane as parking meters can cause a ripple of frustration, with broader consequences for urban businesses and their patrons.

PrevBinodal small towns: a help or a hindrance?
What’s in a name? Apparently not much for apartment complexes.Next

6 thoughts on “Generosity can be measured in meters.”