Binodal small towns: a help or a hindrance?

When I was in school a few years ago doing research on various downtowns across the US, we had to spend twice as much effort on gathering demographics for New York City than we did for anywhere else. Of course this has something to do with the fact that the residential population of downtown Manhattan is larger than anywhere in the United States, but this still begs the question, “What is downtown New York City anyway?” Are there specific boundaries? If so, what are they? We came to the conclusion that Lower Manhattan may be the old financial center, but Midtown Manhattan represents such a large agglomeration of business and commerce that it could just as easily qualify as a second downtown, making New York a city with a binodal downtown.

Urban scholars have applied central place theory (among others) to determine why firms may cluster in specific locations, and many of these same principles loosely apply to any analysis of a metropolitan area’s “second downtown”. Perhaps the most high profile of these is Joel Garreau’s Edge City, popularized by his similarly titled 1992 book, but in this work he refers to the post-modern urban agglomeration, thoroughly rooted in automobile travel and strategically located at the converge of major highways—sometimes also lacking in a residential population. In the case of Manhattan, both of its downtowns pre-date the automobile with architecture that reflects a concentration of activity rooted in foot travel and public transportation; residential populations are also firmly established.

Could there be a similar example of binodalism but at a small-town scale? My recent travels to towns in west-central Indiana suggest so. Brazil, Indiana, about 60 miles southwest of Indianapolis and best known as the birthplace of Jimmy Hoffa, offers a compelling deviation from the conventional Midwest town layout. Though the seat of government for Clay County, it does not feature the archetypal central courthouse green upon which the principal businesses trace the perimeter. The courthouse in Brazil rests on its own block, as seen below: 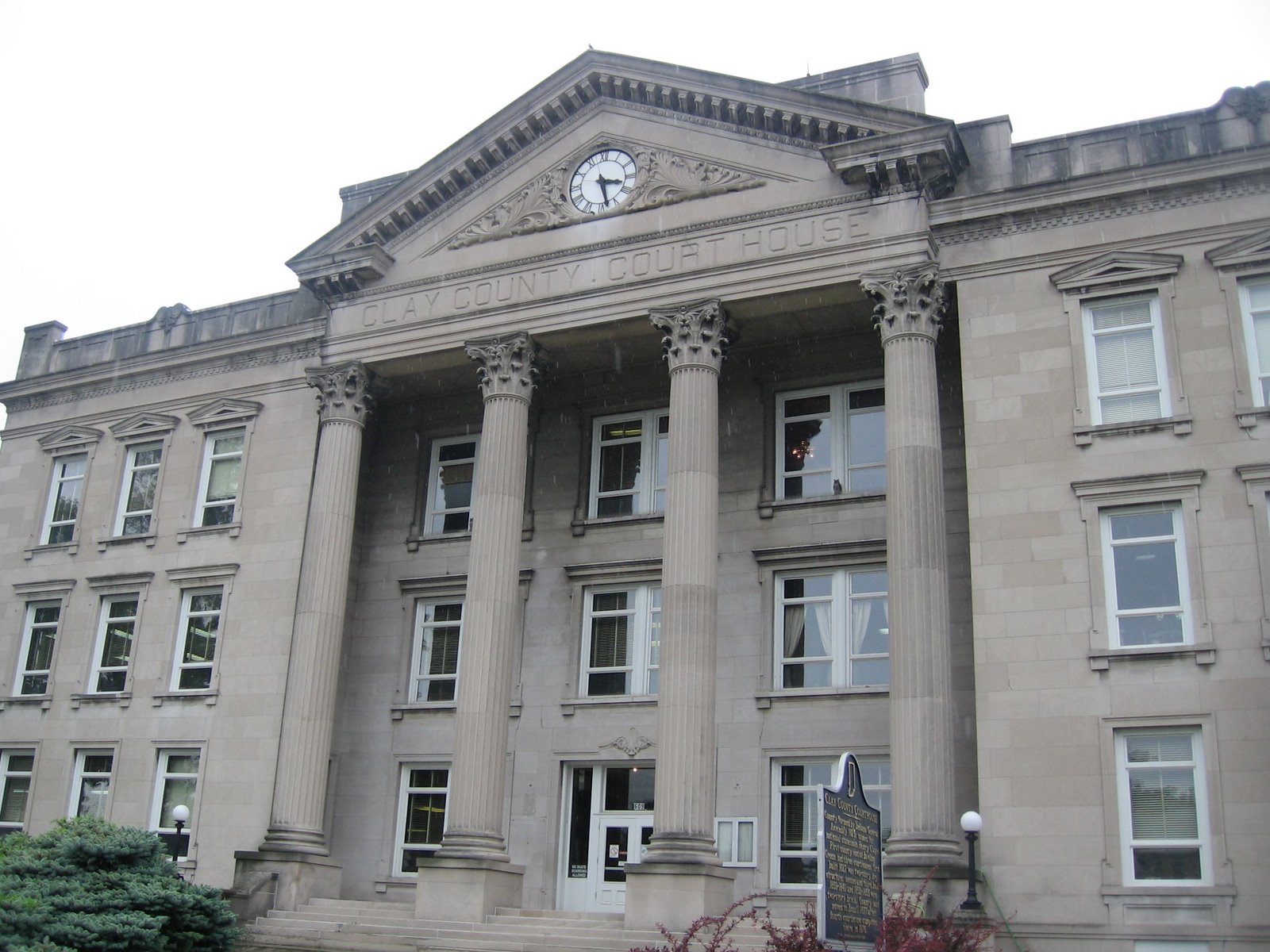 [My photo is not adequate for showing how the courthouse rests on its block. To see a better photo, go to Historic Marker Database.]

However, instead of being surrounding by the historic commercial center, this is what one sees across from the courthouse instead of the tightly packed commercial buildings: 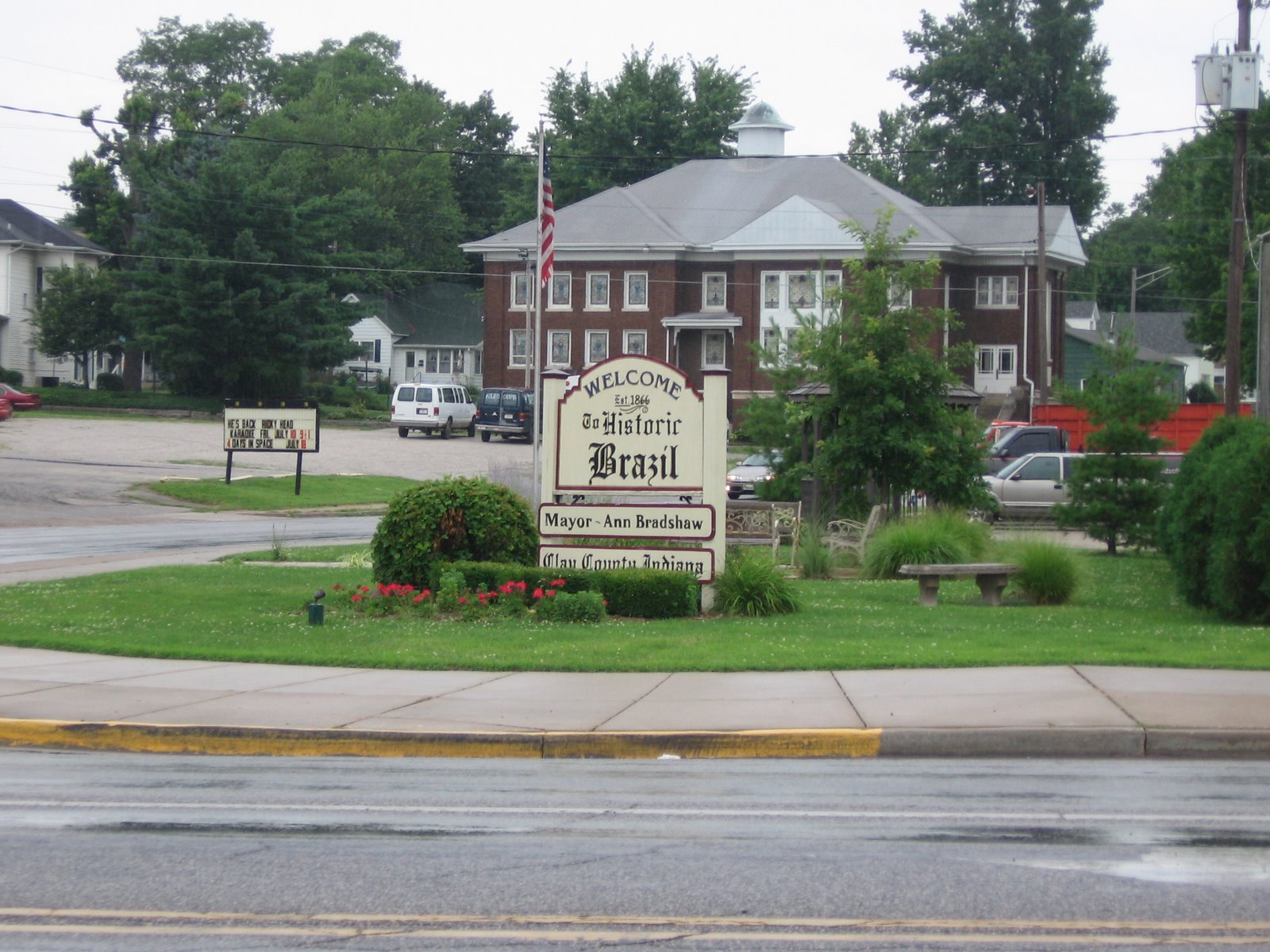 Then a block-long main street continues westward along Highway 40 (the National Road), pointing linearly away from the courthouse—but only on one side of the street. These buildings do not face the courthouse at all. 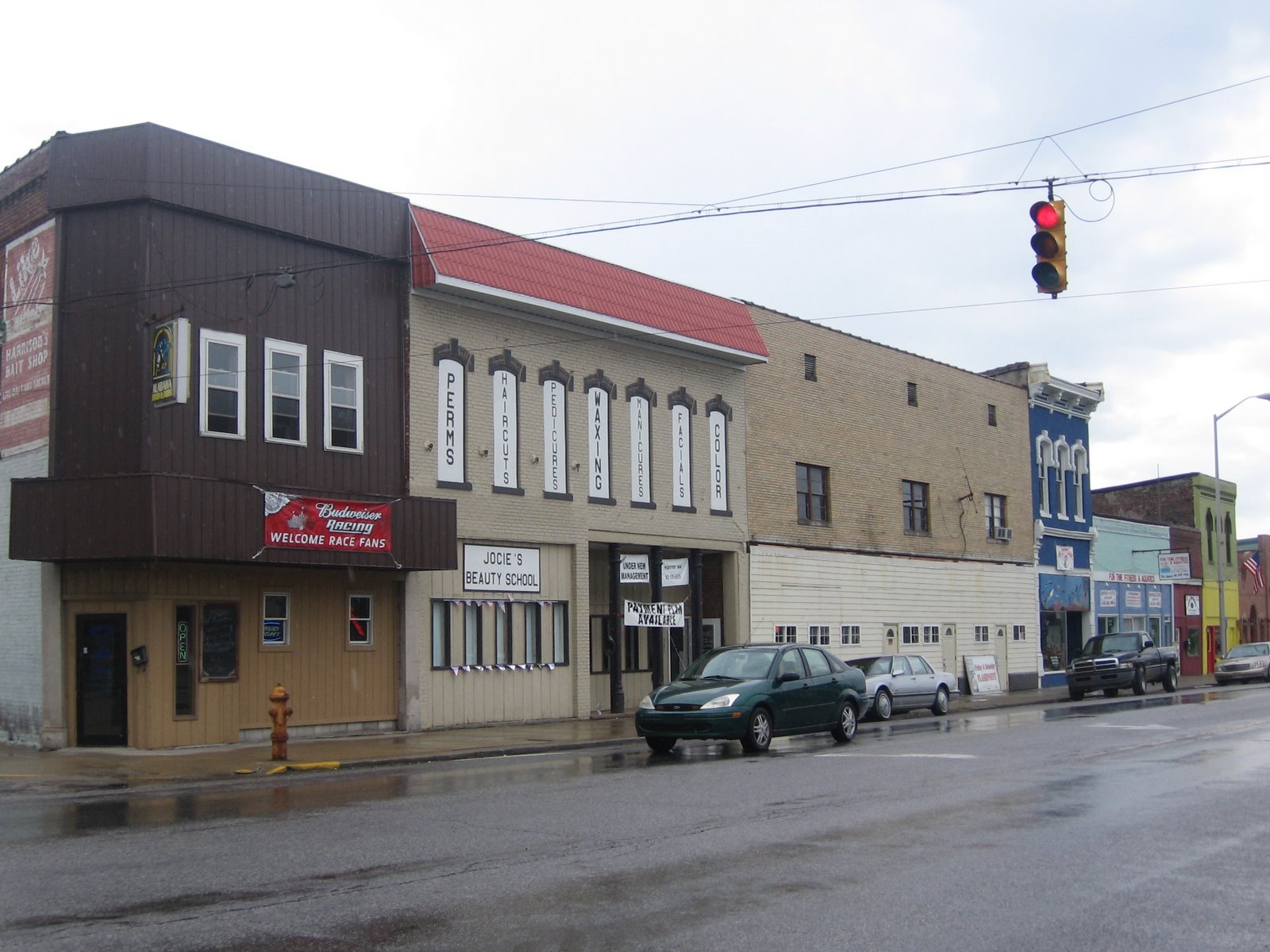 The other side comprises mostly private residences, or older homes converted to law or accounting offices.

Continuing west along this highway is a block or two of homes and homes-as-offices, and then several more blocks of the extended commercial main street continue, as seen below—this time on both sides of the street. (My picture-taking ability suffered a bit because it was raining at this point.) 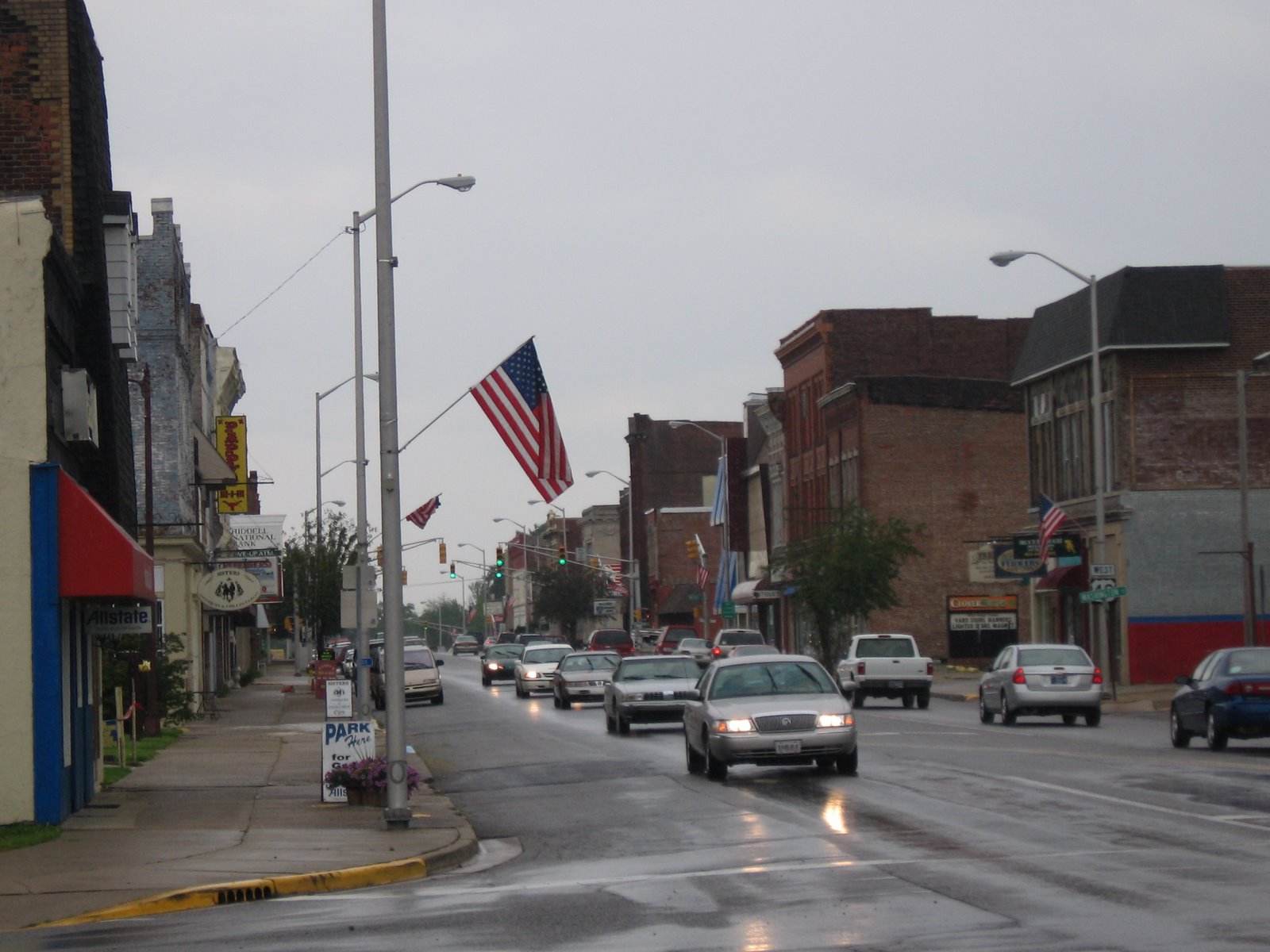 Could this be an example of binodalism? I am not certain what else it could be. Though only a couple blocks separate one portion of the main street commercial corridor from the other, I do not believe that “lapse” in commercial buildings was ever anything but private residences, and a mere block of interruption in a commercial corridor for a town the size of Brazil is sufficient to represent a significant schism in the neat procession of buildings that comprise most main streets. (One could postulate that it was one long uninterrupted Main Street in decades prior, and that only a few blocks were demolished and homes built in replacement, thereby “splitting” the Main Street. However, the intervening residential section appears just as old as the commercial buildings. My regrets that I did not take pictures of these homes.)

Thus, it would appear that Brazil has, on the scale suitable for a town of 9,000 inhabitants, a commercial quarter more directly tied to central government, and then one more directly associated with commerce and the rail that governed all trade back when Brazil was at the peak of its prosperity. Research from the Clay County government website supports this:

“The first Courthouse was built in the newly platted town of Bowling Green in 1828, soon after Clay County was formed by the Indiana legislature. It was a two story structure of hand hewn logs. . . . By the 1860’s the towns of Harmony, Knightsville, and Brazil were growing rapidly, due in part to their location along the National Road, and also because of the many coal companies in that section of the county. An effort to move the county seat of government to a more central location, which had begun in the 1850’s, grew stronger creating controversy among citizens. In the 1860’s citizens in the northern section of Clay County became more organized in their efforts.In 1871 brothers Robert and John Stewart donated a tract of land along the National Road in Brazil for proposed site of the new courthouse.”

It would appear, then, that the western commercial corridor and the eastern one (directly abutting the courthouse) enjoy separate histories. The relocation of the county seat from the town of Bowling Green (now scarcely a dot on the map) to Brazil explains why Brazil deviates from the standard courthouse square layout of most county seats in Indiana; it never intended to serve as the center of government. My suspicion is that the diffusion of what could have been a continuous main street—or a conventional Midwestern county seat with its courthouse at the central square—has weakened the City of Brazil’s ability to marry its identity to its historic architecture. If my pictures have not already indicated this, much of Brazil appears to be struggling economically; these gaps along the main street indicate a downtown that has lost its economic base, robbing these buildings of their viability as storefronts and deteriorating the formerly uninterrupted streetwall that these commercial buildings flanking either side of Highway 40 would have established. The main street with buildings on both sides—most likely the older of the two “downtowns”—is particularly desolate, while the one closer to the courthouse appears to be in better shape.  The binodal architecture results in binodal economic health and the ensuing character.

Of particular note in the easternmost of the downtowns—the healthier one closely linked to the courthouse—is a Mexican Restaurant that appears to be the most prosperous place in all of Brazil’s two downtowns. 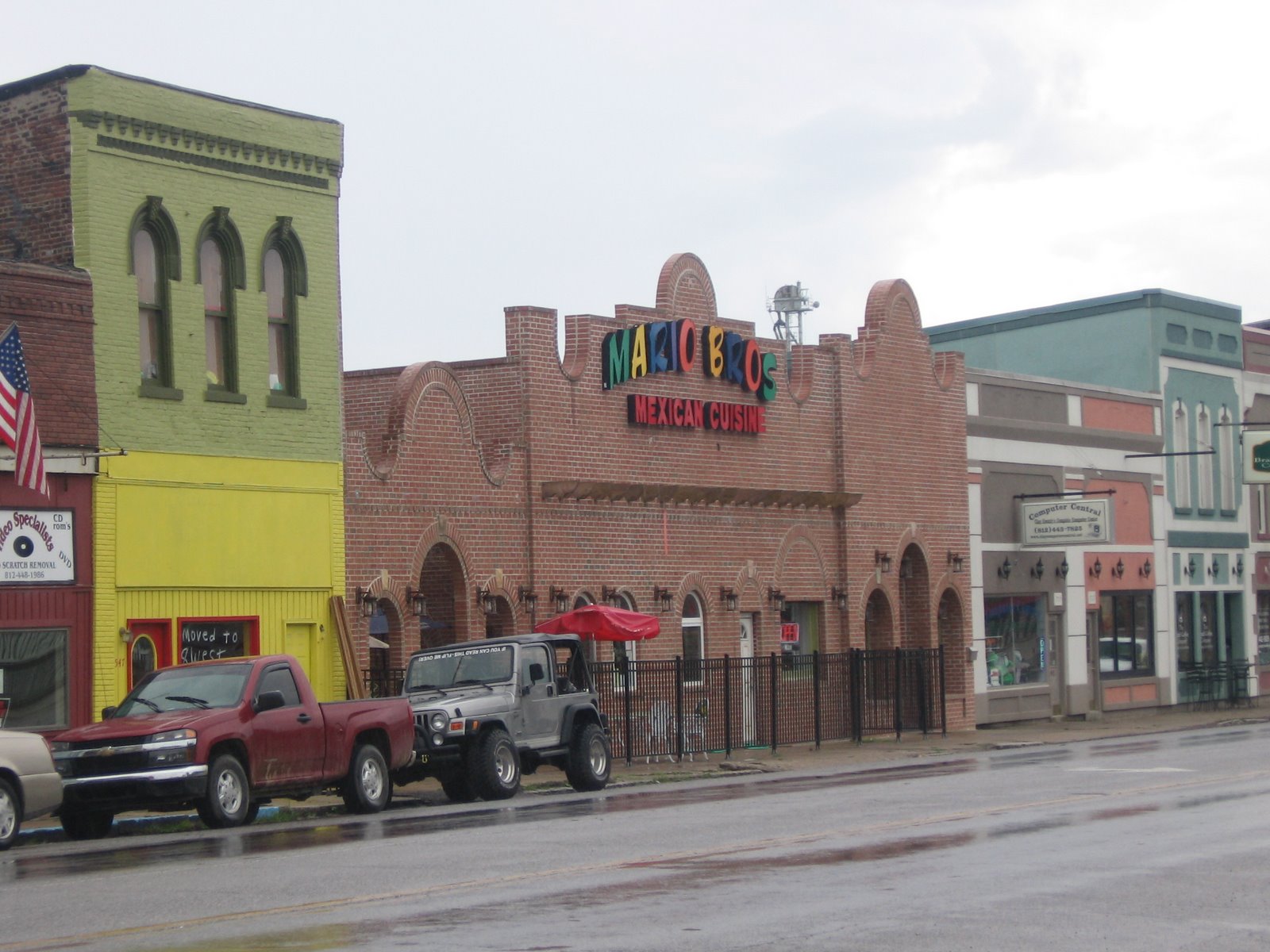 The architecture, evoking southwestern US or parts of Mexico through its decorative arches at the cornice line, clearly does not fit with the architectural vernacular on either side of it. Yet this makes an effective infill after what was most likely a demolition of the original building; it retains the street wall and meets the restaurant operator’s contemporary needs for fenestration and even some al fresco dining.Preservationists may gag at this effort, but it has helped retain the aesthetics of this downtown node better than perhaps anywhere else in the City.

In the seat of government of neighboring PutnamCounty, Greencastle offers an interesting contrast to Brazil’s binodal characteristics. This city, of almost identical size to Brazil, shows adherence to the Midwestern archetype of a central courthouse square with a clear business district carefully wrapped around the square, as seen below. 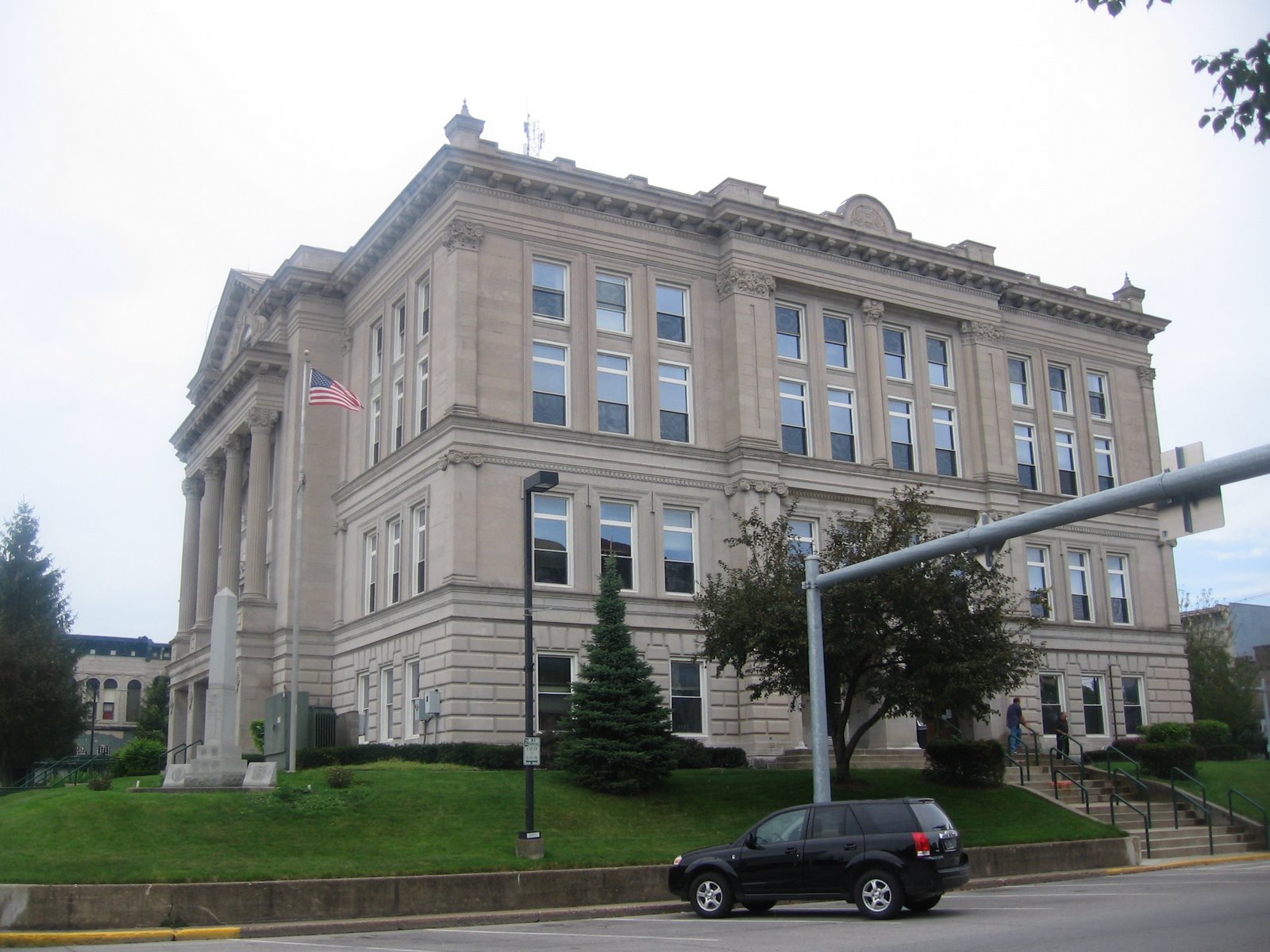 Witness the commercial buildings in the background, to the left of the courthouse. Here are some better images of the streets surrounding the central square: 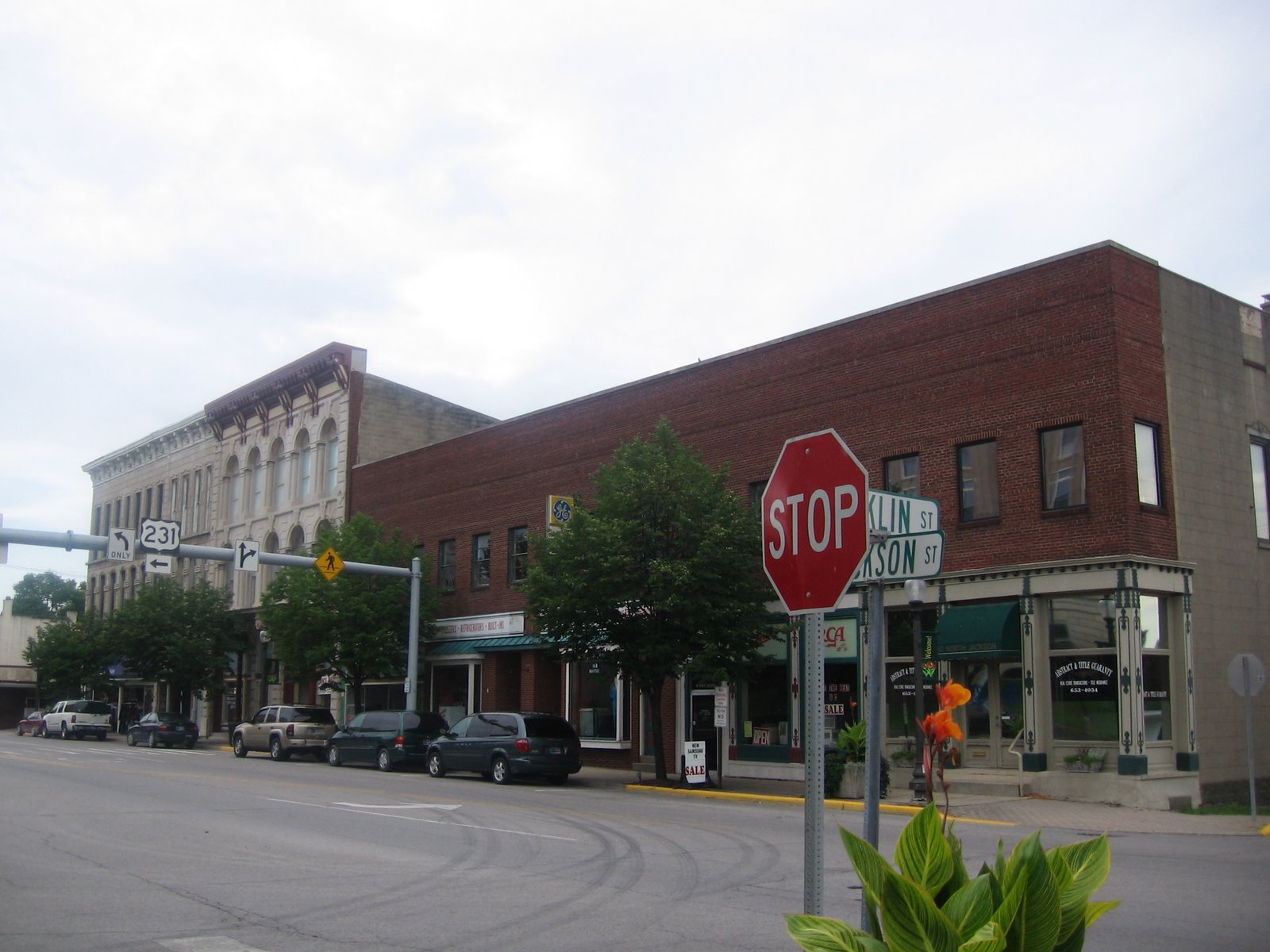 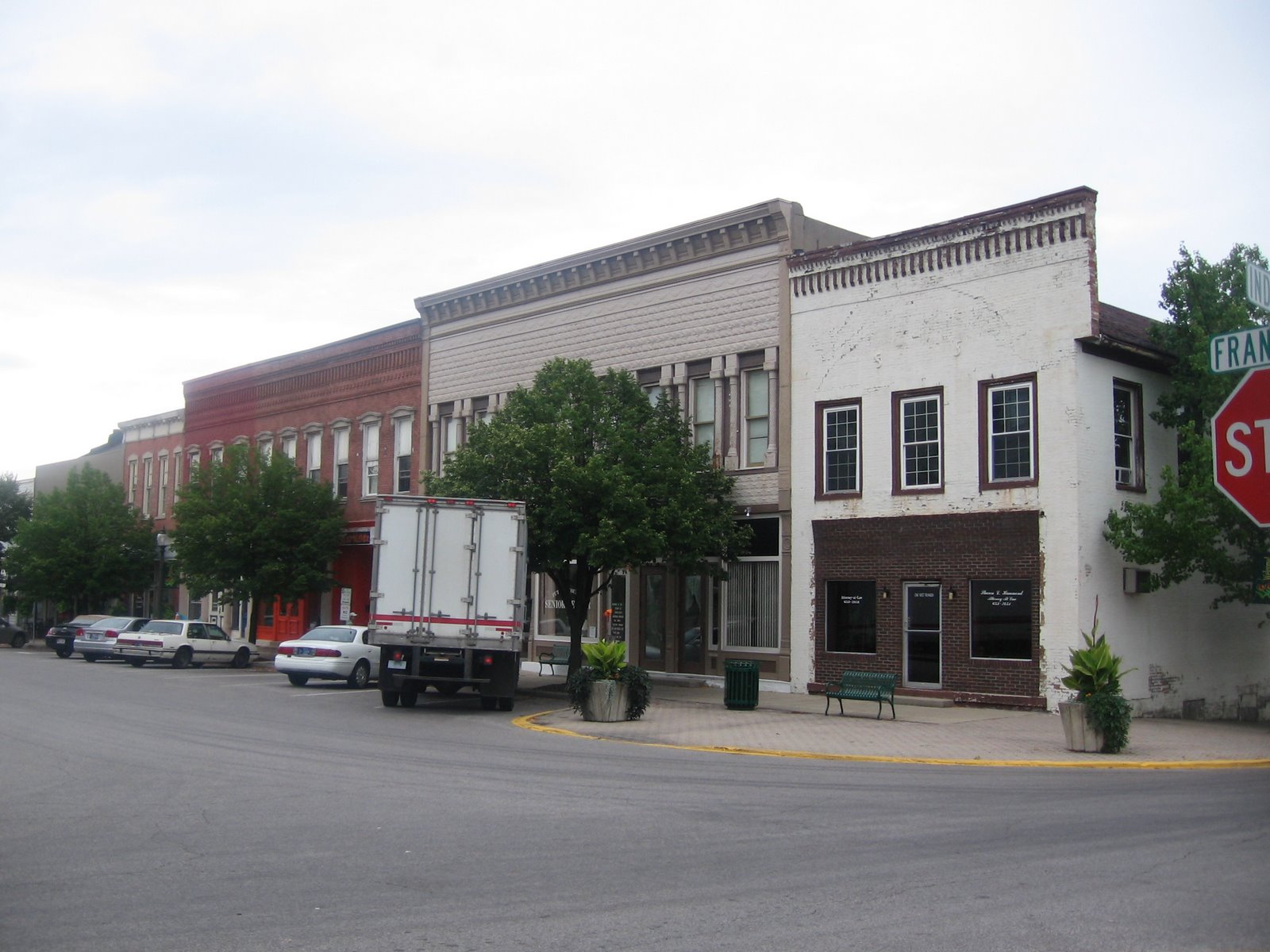 A casual observer would quickly draw the conclusion that the down is much healthier financially than Brazil as well. Greencastle’s biggest claim to national recognition is the fact that it is the home of DePauw University, a highly-regarded liberal arts institution and music school with an enrollment of around 2,000. Universities have such significant infrastructural investment in their original locations that they often guarantee the viability of towns such as Greencastle; rarely if ever would such an institution find enough incentive to relocate and abandon the two dozen structures it has here. The only incident that would sever the ties between Greencastle and DePauw would be the fiscal collapse of the university, which is unlikely to happen (but not unheard of, as Ohio’s Antioch College offers proof). Greencastle’s downtown is, by most measurements, in solid shape: few if any buildings show any sign of disrepair, and the only potential demolition I could find has been replaced with a respectable plaza, barely visible here but nestled between the two standing buildings. 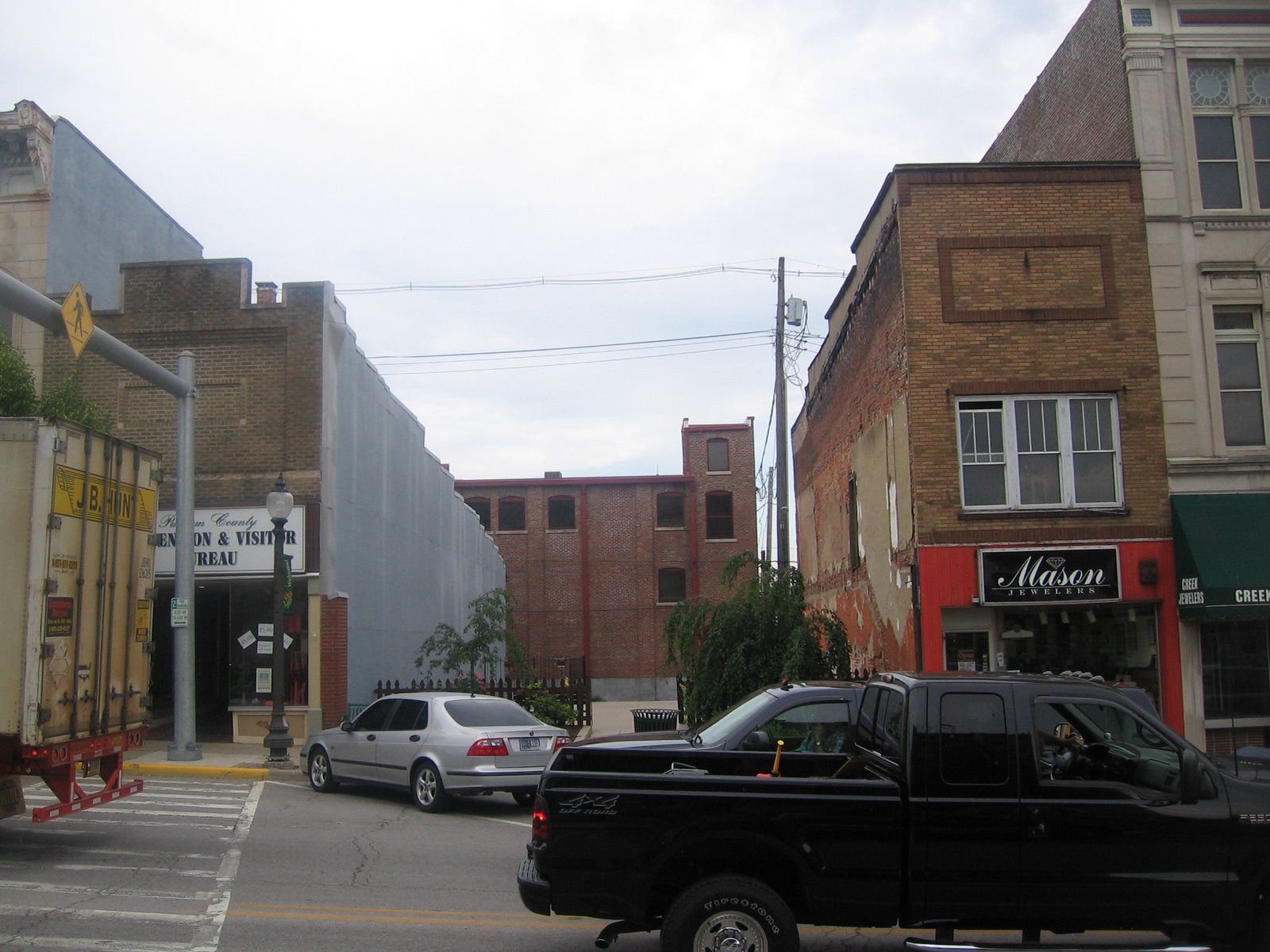 That said, the retail in Greencastle is tired, and retail, which has such a strong influence on people’s perceptions of the overall character of a place, could bolster Greencastle’s reputation tremendously and possibly transform it from a pleasant if unremarkable town to a tourist destination. Instead we see the closure of institutions like this bookstore, an ostensible very recent casualty of the sour economy and the dominance of online book buying: 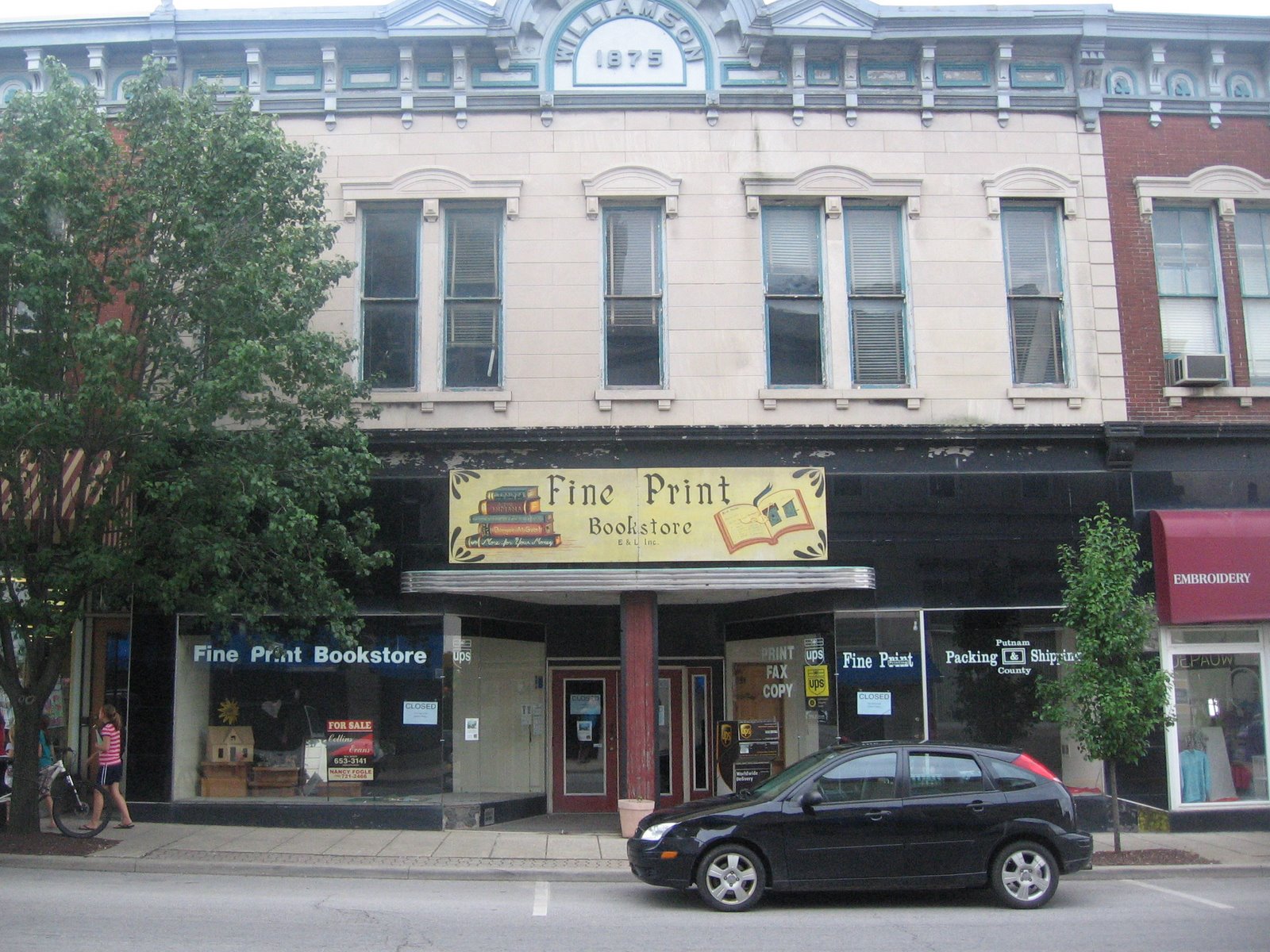 Though central Greencastle has a few restaurants, antique stores, and variety shops, several buildings are filled with public agencies such as this: 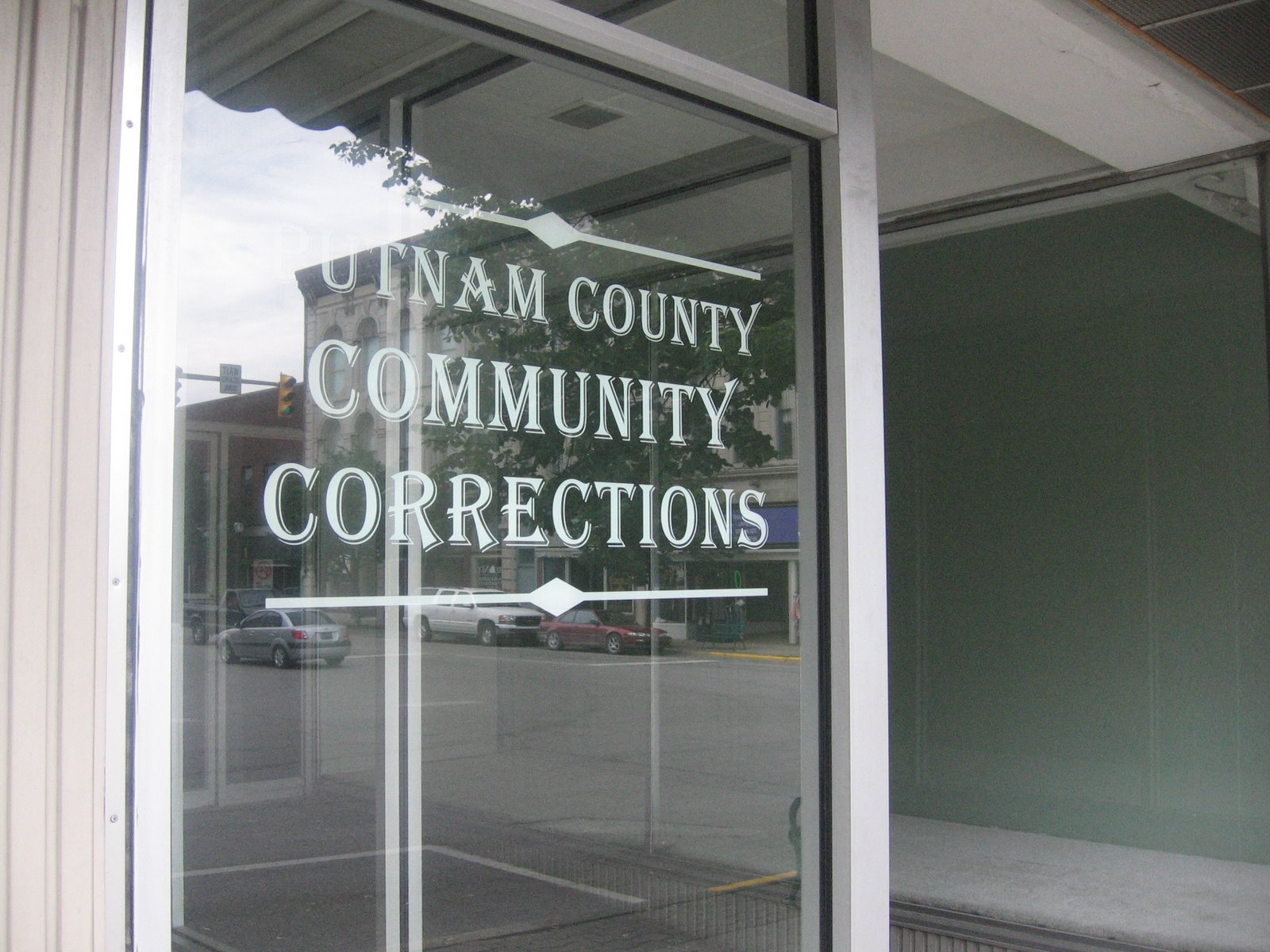 How does one bridge this gap from a sleepy business district for insurance agents, lawyers, or nonprofits to one with viable apparel, restaurants, art galleries, or other boutiques to serve the built-in consumer base of students at DePauw, just four blocks away? Presumably city leaders would prefer the downtown to be filled with revenue generating retail over state agencies or non profits that don’t contribute to the tax rolls, but perhaps the citizens of Greencastle have decided through the market that they don’t want the retail components that could shift the town to a real destination. After all, if these retailers move in through tax breaks or various government incentives instead of market forces, it may only result in a short-lived, contrived, and cosmetic approach to town center revitalization. There is nothing particularly troubling looking to Greencastle; by contrast, Brazil appears almost indisputably troubled. Greencastle, by adhering to conventional county seat urban design standards, may enjoy greater flexibility for a widespread resurgence in economic health than Brazil ever will, largely because the bones of its original historic architecture remain intact. Brazil’s binodality means it was a government seat by accident rather than design; it can scarcely hope ever to compare to Manhattan in terms of the agglomeration of economic activity. But the signage in Brazil, its emphasis on appearing “historic”, would suggest that those are its leaders’ aspirations far more than Greencastle, which has no such signs visible to me at least, despite having retained its architectural history much more diligently.

Ultimately the distinction between these two towns, almost identical in population and with only 25 miles separating them, boils down to the definition of a “node”, whether cribbed from the dictionary or used by Kevin Lynch in his seminal work The Image of a City. It is a perceived center of activity, which Greencastle clearly has. Brazil does not. Perhaps the later city’s binodality is actually anodality—the diffusion into two separate main streets eliminates the visual authority established by a single indisputable center. Without such a focal point, Brazil may depend less on working with what it has and will instead need to build anew, to compensate for what it lacks.If that’s the case, then Mario Brothers’ Mexican Restaurant isn’t a bad start.

PrevSuburban desolation taken to new extremes.
Generosity can be measured in meters.Next

3 thoughts on “Binodal small towns: a help or a hindrance?”