After yesterday’s lengthy musings on strip malls, I’m going to spare the readers (and myself) a lengthy polemic on billboard proliferation and ensuing blight. But I had to show this beauty from Atlantic City, NJ, taken on a frigid winter day a few years ago: 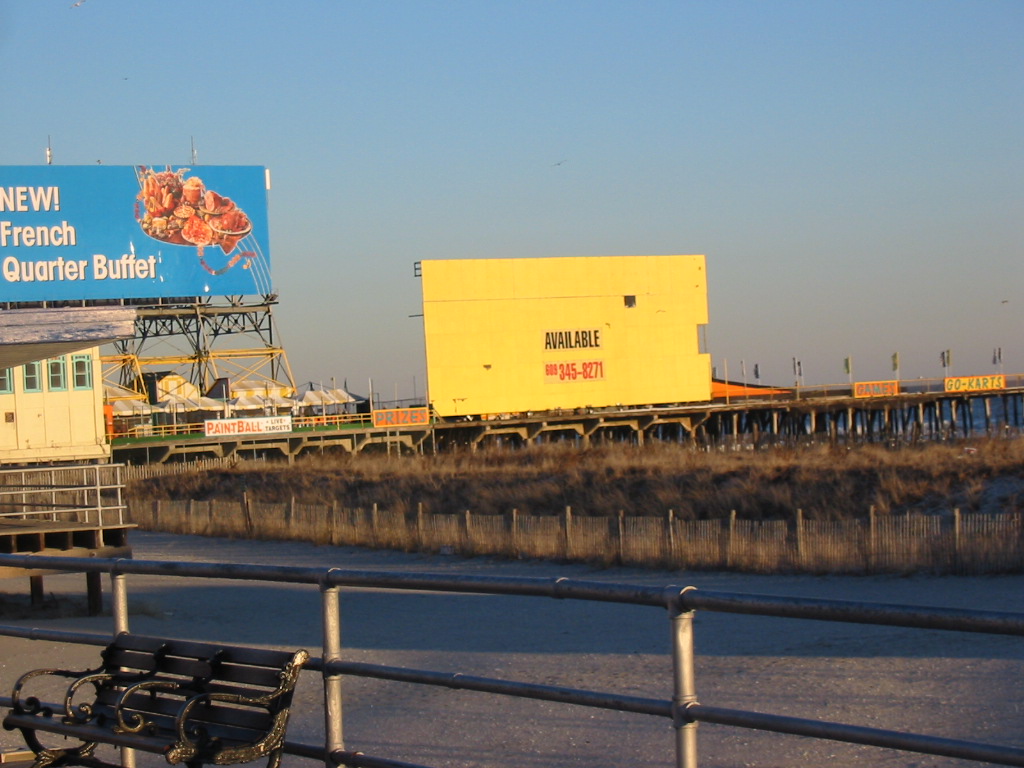 But what about this particular slab of rotting particleboard? Such a prominent location, right there on the Boardwalk! The most valuable real estate in Monopoly! The timeless song by the Drifters (referring to Coney Island’s boardwalk, but a boardwalk nonetheless)! The demographics and economics of Atlantic City scarcely resemble those of Plainfield, IN, the boom-burb featured yesterday. But this sad sight may indicate that the proliferation of mounted advertisements is just as problematic as our glut of strip malls: too many spaces, not enough buyers.

Regulation and strict permitting for billboards most likely help to reduce excessive billboarding and blight created from a consequent lack of demand. Some clearly some would argue that any billboard—blank or otherwise—is a blight to the environment. I don’t want to make a value judgment on billboards; I’m no Lady Bird Johnson. I often think billboards can be a prosaic but powerful vessel for folk art expression, though I can also respect those who see them as an egregious blend of commercialism and pollution.

One element that surely influences the success of billboards—and retail—beyond their location, location, location is the temporal factor. Time of year in a seasonal town like Atlantic City could have a huge impact, and it may be hard to convince a vendor to advertise during the slow season; it would be interesting to know how long billboard companies typically lease their space. Then again, Atlantic City is hardly the picturesque seaside resort of the Roaring Twenties. Despite its extensive waterfront (and the oft referenced boardwalk), the casino culture is probably its biggest draw—an industry that knows no seasons, nor do they necessarily have much interest in the neighboring Jersey shore. Atlantic City’s public beaches are undoubtedly more crowded at a warmer time of year, but from what others have told me, the crowd that populates these beaches tends to have low purchasing power, which could deter some companies from advertising. (Low income neighborhoods, incidentally, often endure a surfeit of billboards, so the economics may not sway this very much.)

Perhaps innovation plays an even bigger role here than in strip malls. Is it possible that, with both rotating panel billboards and now animated LED displays, the conventional static image will lose its luster? If high-speed train travel ever became a prominent means of transportation, would we see billboards along the railroad track, or would we be moving too quickly for the images to settle into our minds? The leadership of Atlantic City no doubt considers a single dead billboard as a minor concern, but I think these mounted advertisements are indelibly wedded to the larger palette of visual communications and are just as semantically rich as directional road markers, neon beer ads, barn roof paintings, or those great welcome signs when we cross state boundaries—all minor fixations of mine that hint at upcoming postings.

PrevWhy is retail so fickle?
Democratizing the streets.Next